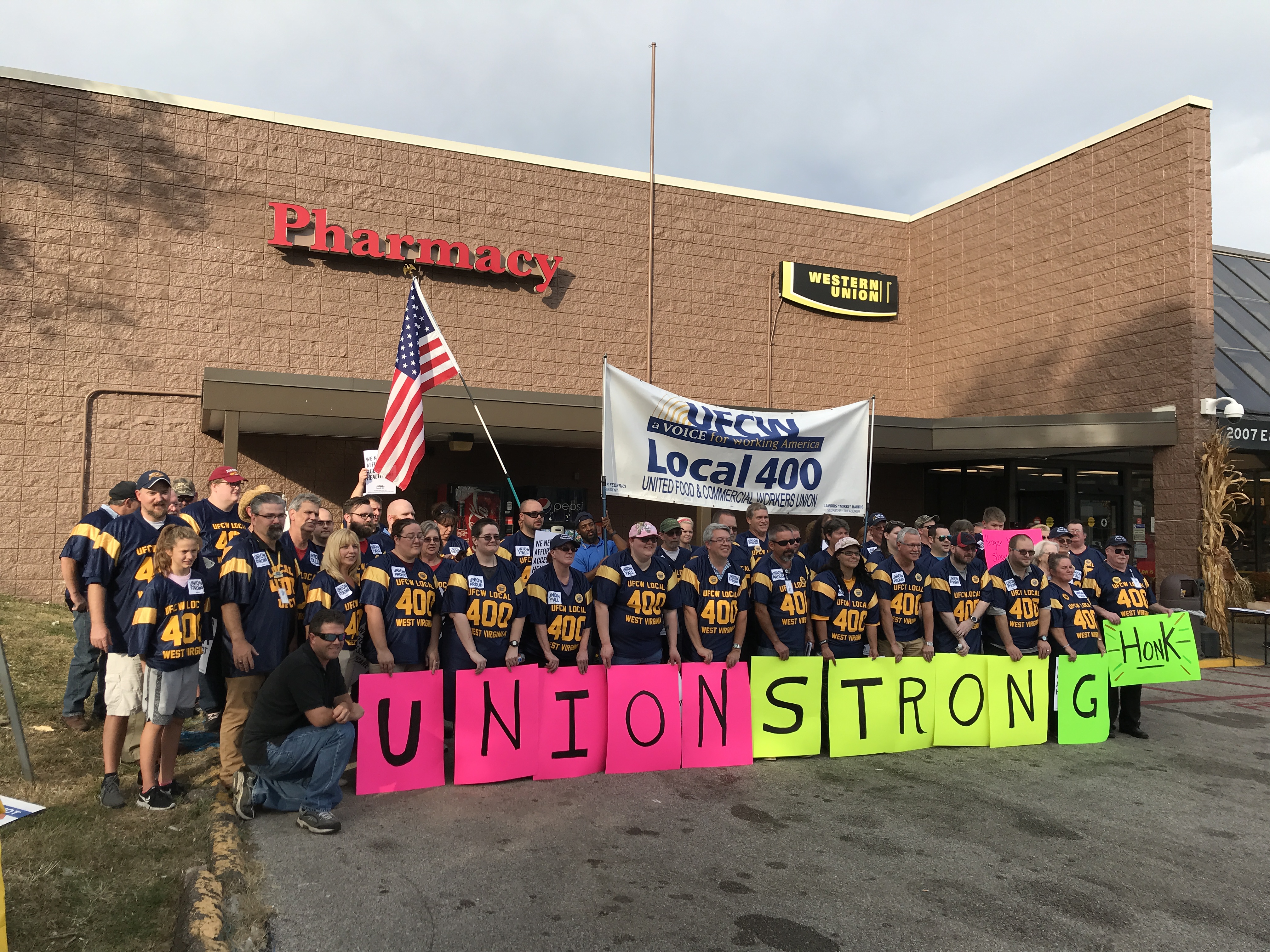 No matter how you look at the past year, 2017 has been one for the history books. Here at Local 400, we‘re celebrating some major successes. As we look forward to 2018, here’s a quick trip through some of the highlights in 2017.

A team of Kroger store associates led negotiations for the new contract on behalf of UFCW Local 400.

We all know it is extremely rare in this day and age to win a contract without losing a single benefit. Even at a time when other retailers are slashing benefits, we didn’t give up a single thing in our latest Kroger contract in West Virginia. We successfully preserved our healthcare and retirement benefits while also increasing pay. And it couldn’t have happened without you.

Workers from the nation’s only Lipton tea plant voted overwhelmingly to approve their first union contract. This represents the first time in the history of the plant when workers were given the opportunity to vote on the terms and conditions of their employment.

Members of the Montgomery County Council were joined by County Executive Ike Leggett at a ceremony on Monday, November 13 where a $15 minimum wage was signed into law.

The USDA, which regulates meat and poultry processing, is currently considering a petition by the National Chicken Council to eliminate the current line speed limit of 140 birds per minute. UFCW is fighting back, lobbying Congress to undo Trump administration policies, advising immigrant members about how to protect themselves, and mobilizing public opinion against the cruel impact of immigration raids.

Four Candidates Recommended by Local 400 Win Elections in Virginia
Four of the candidates for the Virginia House of Delegates who were endorsed by Local 400 won their races, including: Elizabeth Guzman (House District 31), Hala Ayala (District 51), Karrie Delaney (District 67), and Jeion Joyner Ward (District 92).

In a landmark victory for workers in the nation’s capital, the District of Columbia has enacted universal paid leave legislation, providing one of the nation’s most progressive packages of family and medical leave benefits. Starting in 2020, D.C. workers can take up to two weeks of paid sick leave, six weeks paid time off to care for sick loved ones and eight weeks of paid time off for new parents.

Thanks to the Earned Sick and Safe Leave Act of 2015, a new law championed by UFCW Local 400 and our allies, if you work in Montgomery County, you can take paid time off if you or a loved one get sick. As a Local 400 member working at Giant or Safeway in Montgomery County, you earn one hour of paid sick leave for every 30 hours you work, and you can earn up to 56 hours a year.

Kristy Vance, a shop steward at Kroger #402, poses for a photo with her coworker, Alex Taylor. Alex was awarded $250 in back pay after Kristy reported a manager doing work that should have been assigned to Alex.

Kroger Shop Steward Wins $250 in Back Pay for Coworker

For years now, Kristy Vance has seen managers, management trainees and loss prevention staff stocking shelves at her store. This not only violates the Kroger-Roanoke contract, which specifies that only bargaining unit members can stock shelves, but it also reduces the number of hours Local 400 members are scheduled to work. So Kristy started taking photos and documented 24 hours of management doing shelf-stocking. The result of her efforts? The company could not dispute what happened and Local 400 won $250 in back pay for part-time associate Alex Taylor, covering the extra hours he should have been assigned.

As shop steward and florist at Kroger #326, Nicole Boyd was tired of seeing managers doing work that was supposed to be assigned to her coworkers. She too took photos every time she saw a manager stocking shelves and earned back pay for several of her coworkers.

Courtesy clerks are only responsible for a limited set of duties, however if a courtesy clerk is assigned work above and beyond their normal duties, he or she is supposed to get paid more for doing that work. But when Kroger-Roanoke member, Drema Trent, saw clerks working the cash registers at her Kroger store, she decided to do something about it. Her documentation resulted in ten courtesy clerks promoted to front-end clerks and given raises.

With management only looking at the bottom line, it’s up to us to bring the issues of workplace safety up and demand action. That’s exactly what a team of shop stewards as DanChem Technologies did through their employee-driven safety program.

Laurette Ford is a force of nature. For more than a decade as a Local 400 shop steward, she made it her mission to build her union by signing up as many new members as humanly possible. And she succeeded brilliantly.

Local 400 Shop Stewards Darlene Butler-Jones and Bill Osborn had never gone to Annapolis to meet with their state legislators, testified before the Maryland General Assembly or spoken out at rallies before. So when they were asked to help lead Local 400’s campaign to pass the Healthy Working Families Act, they were a bit taken aback. But after four months of working full-time to make paid leave a right for all Maryland workers, they were fired up and thrilled with the results — the passing of the legislation!

Local 400 members and Tyson management instituted reform to allow any worker to halt the entire production line if he or she witnesses a safety hazard. This reform gave shop steward Aleta Johnsons the opportunity to assist her co-worker and avoid injury.

Joyce Graham says, “I like to be where the action is.” If anything, that’s an understatement. But it goes a long way toward explaining why she has kept working as a nurse at Kaiser Permanente into her late 70s, and only retired this May.

Though he didn’t win the whole show, it was exciting to see “one of our own” share his talent live on television. The son of Local 400 member and representative Kenny Pinkard, who works for Omega Protein, TSoul’s journey has been shaped by his father’s dedication to union activism and changing his community for the better.

For 18 years, Isolina (“Izzy”) Pistolessi has worked as a nurse at Kaiser’s Falls Church Care Center and this year she was presented with Kaiser’s National Extraordinary Nurse Award. This is a rare honor, and she is only the second nurse from Kaiser’s Mid-Atlantic Region to receive this recognition. She was flown to California in May to accept her award.

Workers at the nation’s only Lipton Tea factory wore “No Forced Overtime” stickers while negotiating their first union contract with Lipton.

A pivotal moment in the Lipton tea organizing campaign was when Anita and her co-workers spoke by telephone with Chicago Hellman’s workers, who are members of UFCW. Hellman’s and Lipton are both owned by Unilever, an international conglomerate. “We got to ask about their pay, benefits and working conditions. And we learned that what they have is much better than what we’ve gotten until now. As soon as we showed our co-workers the difference, cards started coming in left and right.”

In her five years working at Giant, Taralyn Pike loved what her union did for her, but grew frustrated by what she saw as “a great deal of unhappiness at my store.” So she decided to do something about it — she stepped up to become not only a shop steward but also an activist mobilizing members around contract talks.

Jibril Wallace has been working at the same Safeway in Washington, D.C. for 28 years, since she was a teenager helping her mother pay the bills. Through the years, she had no paid sick days. She understands first-hand what it’s like not to have those days to tend to yourself, your kids, or other family members — so she took a stand.

Victory! All Courtesy Clerks Promoted at Kroger Store in Lynchburg

Member activism and the hard work of Local 400 shop steward Mary Little won a landmark victory at a Kroger store — all courtesy clerks were promoted to front end clerks, gaining raises, benefits, holiday pay and paid vacations in the process.