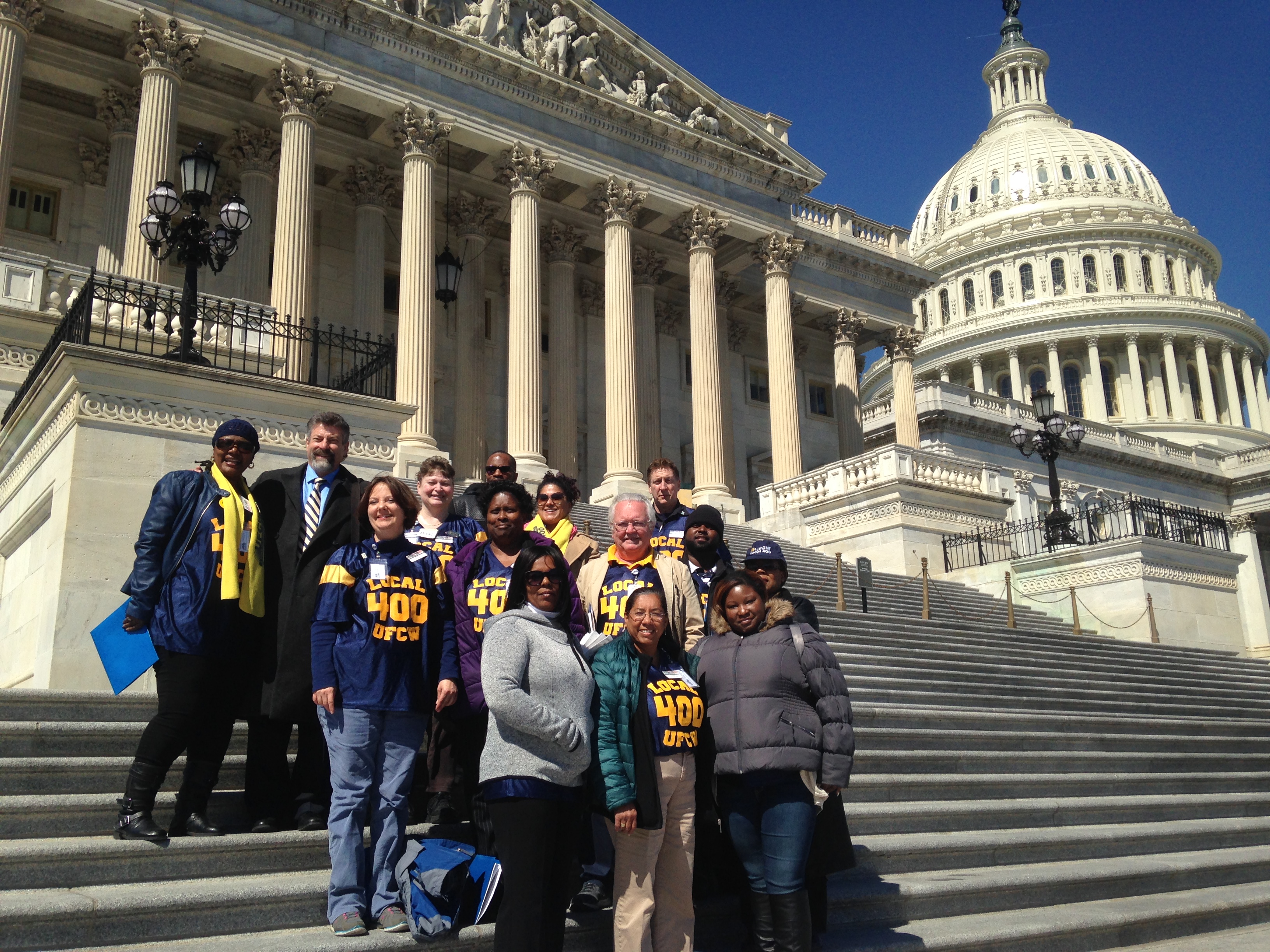 Sometimes it seems like members of congress don’t listen to us. They don’t seem to understand the needs of ordinary, hardworking men and women who just want a better life. All too often, it appears that they’re too busy listening to corporate lobbyists and special interest groups instead of the voters who elect them.

While the House was poised to repeal the Affordable Care Act and throw 24 million Americans into the ranks of the uninsured, Local 400 activists met with their members of Congress, urging them to oppose this bill (also known as Trumpcare), oppose national “right to work” legislation, and oppose immigration raids on workplaces.

“You are the most important people here today,” Local 400 Mark P. Federici told the member lobbyists before they fanned out across Capitol Hill to meet with their senators and representatives. “You own these buildings. You own these offices. The people you’re meeting with work for us.

“Some people would rather we be quiet,” Federici said. “That’s not what we do. Real people speaking to real power is a uniquely American experience. We deserve to have our voices heard. If it wasn’t for us, nobody would be talking about wages, health care, pensions, and working conditions.”

The members had three central messages for the senators and representatives they met with.

Republicans in Congress have introduced national “right to work” legislation that would drive down wages and benefits for working Americans. In the states that have enacted “right to work” laws, including Virginia, earn about $6,000 less per year than those in other states, according to the Bureau of Labor Statistics. These laws undermine union members’ bargaining power by letting freeloaders benefit from the dues of their co-workers.

“Sooner or later, everyone needs help,” said Charlene Haley, a shop steward who works at Safeway in Fairfax, Virginia. “And then you have to represent them, even if they haven’t contributed anything. It happens all the time.

“When an employee gets in trouble, I coach them what to say and that’s usually enough so they can keep their job,” she said. “Afterward, they join Local 400 because they understand the value of union membership. But it shouldn’t have to come to that.”

“‘Right to work’ laws are unfair to our members, drain our resources, and push down wages,” Federici said. “That’s why we demand that our representatives join us in leading the fight to defeat this legislation in Congress.”

While Local 400 members were meeting with their elected officials, the U.S. House was considering the American Health Care Act (Trumpcare), legislation that would undo the Affordable Care Act, take health care coverage away from 24 million Americans, and give massive tax cuts to the ultra-wealthy.

Isoline Pistolessi, a shop steward at Kaiser Permanente’s Falls Church Care Center who just won Kaiser’s National Extraordinary Nurse Award, has seen first-hand the impact of the Affordable Care Act and fears what would happen under Trumpcare. “I’ve seen patients who just got health insurance for the first time; that’s what enabled them to come in and get care. We can’t take that away from them.

“We need to make health care more affordable, not less,” Pistolessi said. “But this bill will send premiums sky-high, especially for older people. That means if we’re ready to retire before we’re eligible for Medicare, we won’t be able to afford health insurance.

“As someone who provides medical care, I’m especially concerned about the impact of this bill on emergency rooms, hospitals and urgent care centers that have to treat everyone who comes in the door, whether they have insurance or not,” she added. “With 24 million people losing insurance, that’s going to be a real problem.”

Taralyn Pike, a shop steward at Giant #748 in Arlington, expressed her concern about Trumpcare’s huge cuts to Medicaid. “My son has had strep throat six times over the last six months,” she said. “He’s on Medicaid. If not for that, I don’t know what I’d do.”

“This bill won’t fix anything that’s a problem with the Affordable Care Act,” said Local 400 Chief of Staff Mike Wilson. “It’s a handout for wealthy people. It transfers wealth from the poor and middle class to the top 1 percent of the top 1 percent. And it makes insurance a lot more expensive.”

In a number of recent collective bargaining agreements, health care for Local 400 retirees has shifted to the state insurance exchanges created by the Affordable Care Act, supported by stipends from employers and federal premium subsidies. But Trumpcare could upend that.  “This bill will make it tougher for older people to afford health care,” Federici said. “We represent lots of retirees. I shudder to think about how they will get their health insurance if this bill passes.”

The UFCW has bitter experience with immigration raids. In 2006, a series of raids at six Swift & Company meatpacking plants in the central U.S. resulted in UFCW members—including U.S. citizens and green card-holders—being rounded up, detained and criminalized. The rhetoric and policies of the Trump Administration raise the threat that U.S. Immigrations and Customs Enforcement (ICE) could launch a new round of raids at UFCW workplaces, and Local 400 members urged their elected officials to oppose any such efforts.

Isoline Pistolessi offered personal testimony about why raids are so wrong. “My family came to this country from the Dominican Republic when I was six years old,” she said. “My father was going to be assassinated and came here as a political exile. Before we left, our neighbors were raided and it was very scary—I could hear the screaming. No one should ever have to go through that—especially here in the U.S.

“I became a U.S. citizen eight years ago,” she noted. “I had to work really hard to get my citizenship. We need to make it possible for others to follow the same path.”

“You walk into any grocery store in our area and it’s like Ellis Island,” Federici said. “We’re proud of that. Our workplaces—and especially our union—offer opportunity for those who come to America to seek a better life. We don’t want to see any ICE raids. And we want our members of Congress to have our backs if any do occur.”

Following the meetings, the members were energized by the supportive response they received from most of the senators, representatives and staff they met with. Many in attendance said they gained a lot from the experience and they would speak to their sisters and brothers about the key issues before Congress and the importance of activism.

“I would definitely do this again!” said Charlene Haley as the group wrapped up for the day.

Check out photos from the Local 400 Lobby Day on Facebook.