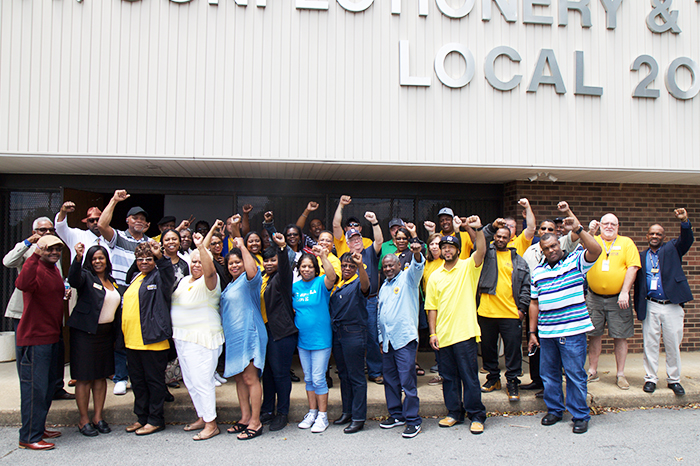 Local 400 shop stewards from several plants in Virginia, including DanChem Technologies, pose for a photo at a seminar in May 2017.

Banks Stamps, Jr., has worked at DanChem Technologies in Danville, Va., for 42 years, and he became a shop steward in 2004 after a 10-month-long strike. One of his top priorities ever since has been to build a worker-run safety program to better protect members’ health. Recently, Banks and two fellow shop stewards, Mike Barker and Eddie Dalton, put that program to the test.

The shipping & receiving lead person at DanChem, Banks knew something wasn’t right when UFCW International Vice President Robin Williams came to the plant for a tour. “There were certain areas that management didn’t take her around to,” Banks said. “But I’ve been here so long, I knew what processes were going on.”

It turns out that one particular room was being used to package a newly-produced material for a customer that was demanding a lot of this product. (The specifics can’t be revealed because it’s proprietary information.)

“The product’s put in large tote bin,” Banks explained. “It comes out of a shoot. Then it’s put through a sifter, which vibrates, turning larger granules into a powder. The problem is it leaves plenty of dust in the air. It’s dangerous to inhale and it actually has explosive properties. Making matters worse, there was no ventilation in the room where the packaging was taking place.

“So we’ve been working on eliminating or reducing the dust to safe levels,” he said. “Mike [Barker] and I had a meeting with management. We let them know our concerns and that we expect them to do what’s needed to minimize the dust. We also told them they need to address the heat and lack of ventilation in that room.”

In response, DanChem management acted to make some temporary fixes to the problem. “The company said they would make some adjustments on the machine used for packaging,” Banks said. “They would transfer the product into smaller drums and sift it into smaller packages. They would blow in cooled air on hot days. The people doing the packaging would rotate in and out, rather than doing full 12-hour shifts in the one room.

“We made clear to them that these actions need to be followed by a permanent fix,” he added. “Among other steps, they promised to install a permanent air conditioning system. We’re going to hold them to it and we’re going to have follow-up meetings, getting employee participation to improve on the design of the safety solutions. If they had done this from the start, we wouldn’t have had these problems.”

Banks emphasizes that the positive results so far are, “A result of our activism. Our members have an employee-driven safety program. And we have subcommittees dealing with specific parts, like ergonomics. Management is only looking at the bottom line of their profits, so it’s up to us to bring these issues up and demand action. So far we’ve had some success and if management drags its feet, we have the grievance process, which is often enough to move things forward.

“It’s a constant battle, but we’re going to see this through to stop the dust and every hazard our members face,” Banks said.