Victory! All Courtesy Clerks Promoted at Kroger Store in Lynchburg 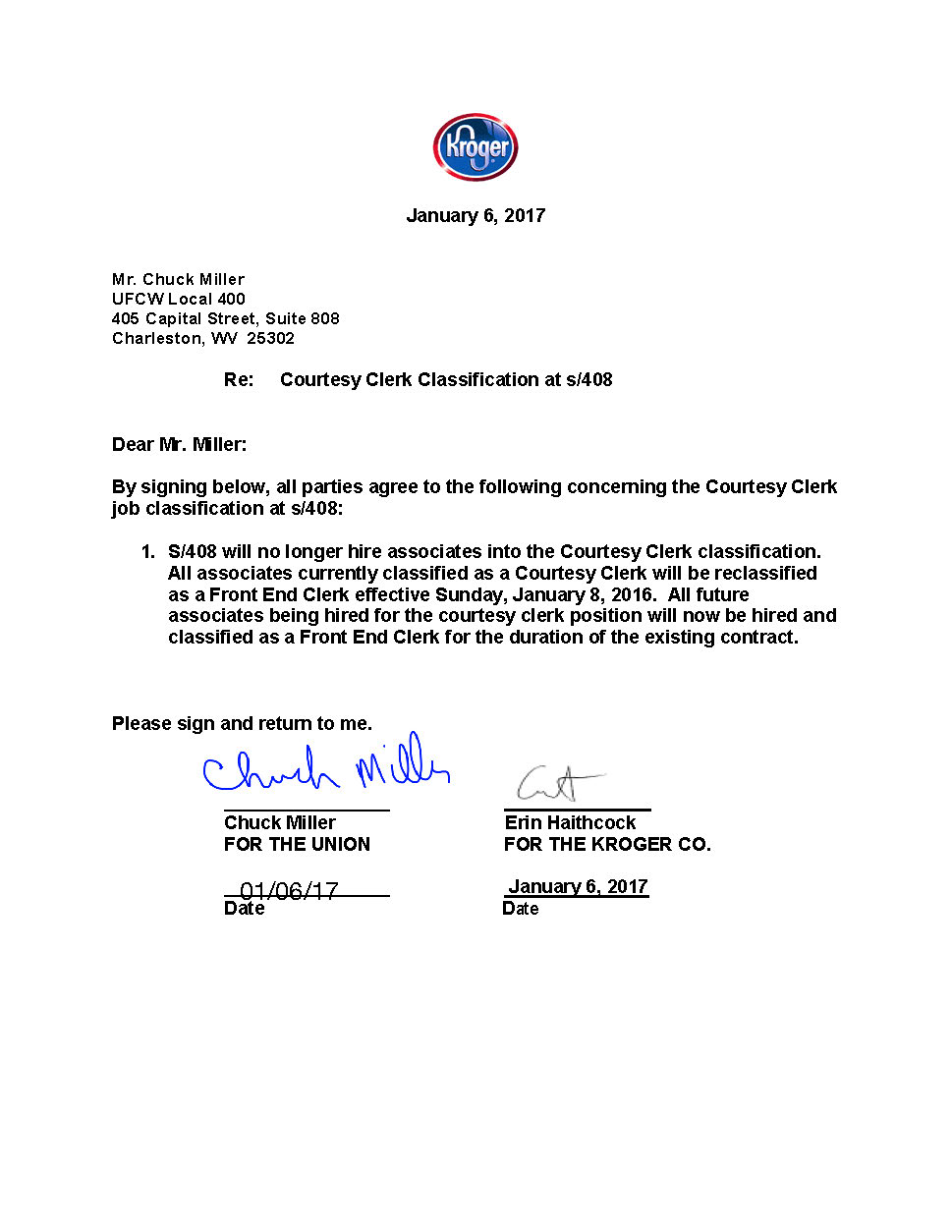 In fact, all Local 400 members working at Kroger under the Roanoke and West Virginia contracts have the power to make the same gains at their stores if management regularly assigns courtesy clerks tasks beyond the scope of their position, such as stocking shelves or providing break relief for cashiers.

Thanks to tough negotiating by Kroger members, the current contracts inRoanoke and West Virginia state clearly that if management at any store misuses courtesy clerks in this way three times, all courtesy clerks are promoted and the position is eliminated. It doesn’t matter how far apart the violations happen or whether they involve different managers or courtesy clerks—it’s “three strikes and you’re out!”

“I saw that one courtesy clerk was manning the register,” Mary said. “I made sure what his classification was, and then I snapped a picture. They asked me what was going on and I explained why I did it. The courtesy clerk said he’d been working as a cashier for a while. I took it to the store manager; he blamed it on the courtesy clerk and said he’d deal with it. But he didn’t. Because several weeks later, I caught the same violation.

“A few weeks after that, I caught a different courtesy clerk working as a cashier and she told me she’d been doing it for almost a year,” Mary recalled. “Management did promote her and gave her back pay, which was good. She was very grateful, said she’d put her back pay in the bank and would use it toward college.

“Most important, this was the third violation,” she said. “So my representative and I put the wheels in motion to enforce the contract.” On January 6, 2017, Kroger confirmed the workers’ victory in a letter, stating:

A copy of the statement signed by Kroger announcing that all courtesy clerks at a store in Lynchburg would be promoted and the courtesy clerk job classification would be eliminated at the store entirely.

This was a huge achievement, but Mary isn’t resting on her laurels. She travels to other Krogers on her two days off.  “I’m going to go to every shop steward,” she said. “I’m going to talk to them, hand them the playbook on how to do this, and tell them how we did it at our store. I’ll coach them, because all courtesy clerks deserve the same raises and benefits as the rest of us.

It’s not that hard to do,” Mary explained. “You just have to be focused and you have to pay attention to your surroundings. You can do your work and also look out for people at the same time. You have to know who your courtesy clerks are. Communication is the number one thing.”

“This is one area where it’s relatively easy for members to make a difference and improve the lives of their brothers and sisters,” said Local 400 representative Philip Frisina, who serves Kroger #408 and other stores in the region. “The process is so simple. If you see a courtesy clerk given non-courtesy clerk tasks, take photos, document the violation, and contact your representative. That’s all it took to get our members the promotions they deserved at this store, and that’s all it will take at any other store. The power is in our members’ hands.”

“I believe everyone should be treated equally,” Mary said. “Courtesy clerks have a hard job. They’re out there in the snow and sleet pushing carts and I always thought it was wrong for Kroger not to give them benefits. They are my co-workers and my friends, and I’m going to do whatever I can to help them out. If I can make a difference in one person’s life, I’m all for it.

“It’s a wonderful thing that we did,” Mary emphasized, “and I’m just going to do everything I can to get every shop steward on board so we can get all of these courtesy clerks what they deserve.”

How YOU Can Take Action

Here’s how you can make a difference: