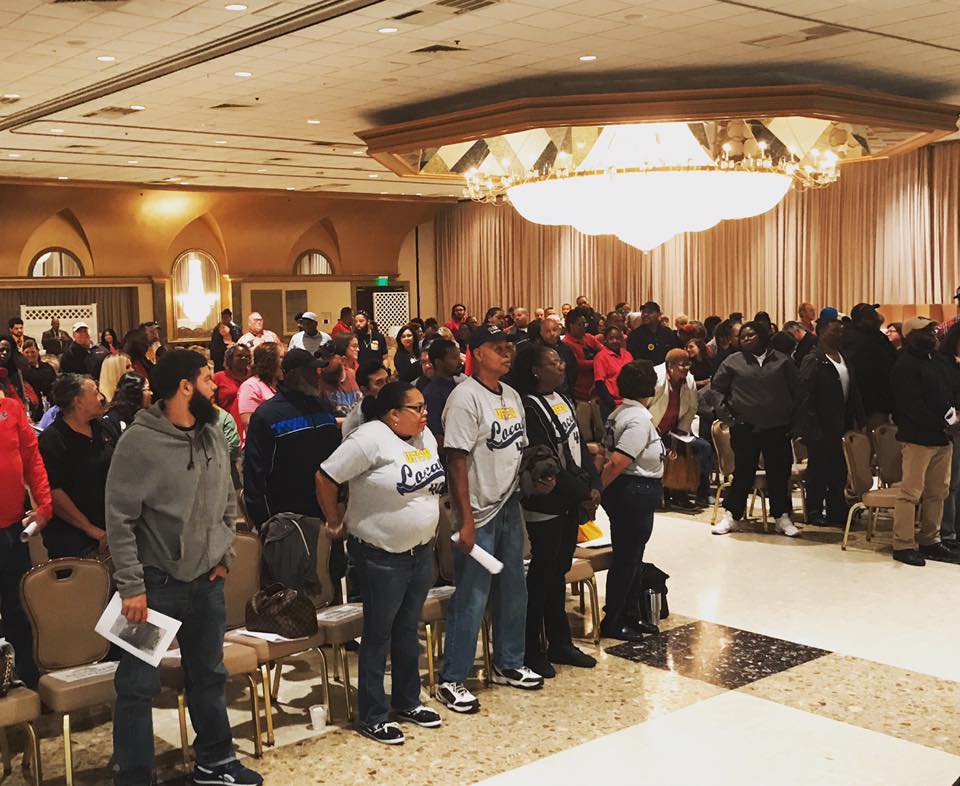 At a union meeting in Greenbelt, Md., Local 400 members stood up to unanimously ratify a new union contract at Shoppers Food & Pharmacy.

After more than ten weeks of challenging negotiations, Local 400 member activism persuaded the company it could not win the concessions it demanded, and resulted in a contract that increases starting pay, greatly improves wage scales, and provides for the same health insurance coverage and pension benefits without any additional employee contributions.

“These talks were very difficult, but our members hung together and made this strong agreement possible,” said Local 400 President Mark P. Federici.

“We came into this with specific goals,” he said. “One was to change the hours progression to a monthly progression on the wage scale to get people raises faster than before. Another was to avoid any increase in members’ out-of-pocket health care costs, in contrast to what’s happening with most other employers. A third was to ensure proper pension funding. A fourth was to have a strong successorship agreement so our members will keep their jobs and contract if Shoppers is sold. And a fifth was to maintain seniority. Thanks to member activism, we achieved each of these goals.”

“The bargaining started on June 13th and ended August 24th, and there were a lot of blood and guts out there,” said Mike Rickord, a shop steward who works at Shoppers #2674 in Dumfries, Va. and served on the Contract Action Team. “We heard time and again the wishes of the members to keep everything we have, and we kept each and every one of our benefits, while increasing others. I can testify in front of God and country that this is an excellent contract for the next three years.”

“This was a long and drawn out fight with [Shoppers parent company] Supervalu,” said Diane Nokes, a Contract Action Committee member and shop steward at Shoppers #2625 in Manassas, Va. “I cannot tell you how many times they walked away from the table. We did our very best, worked long and hard, and got a good contract.”

“This is an excellent agreement,” said Debra Coleman, a Contract Action Team member and shop steward at Shoppers #2632 in Forestville, Md. “We worked hard from sun-up to sun-down, went to sleep and got up early to do it again. We are the union. Member participation was the key to everything.”

“With some of the proposals the company made, it seemed to me like someone was smoking something,” said Ed Cooley, a Contract Action Team member who is a shop steward at Shoppers #2623 in Clinton, Md. “They wanted to take away Sunday and holiday pay and they were adamant. We won because of everyone who showed up, and because our union is working 24/7 to fight for our members.”

The collective bargaining agreement, covering 2,500 workers in Maryland and Virginia, takes effect retroactively as of July 9, 2017 and it expires on July 11, 2020.

Mary Robertson, a Contract Action Team member who is a shop steward at Shoppers #2650 in College Park, Md., noted that this round of bargaining was different than others in her 25 years as a Local 400 member. “We got out to more stores and talked with more members,” she said. “We made clear to them what was at stake and that they needed to be informed and active, and to be a strong voice. The bargaining was tough at first, but I think that our member outreach convinced Shoppers that we would rather strike than let the company take away our benefits and fill their pockets. That’s why we won a strong agreement.

“In particular, the change in the wage scale progression to monthly will help greatly,” she added, “because it will reduce turnover among newly-hired part-time workers, which has been a big challenge at some of our stores.”

Rickord, also a veteran of previous negotiations, said, “This was one of the hardest fought and most difficult rounds of bargaining in dealing with the company, due to their unwillingness to understand the plight of their own workers. While it wasn’t confrontational, it was often disrespectful, but in the end, we got the respect and recognition we justly deserved. That was because of member solidarity and lots of hard work.”