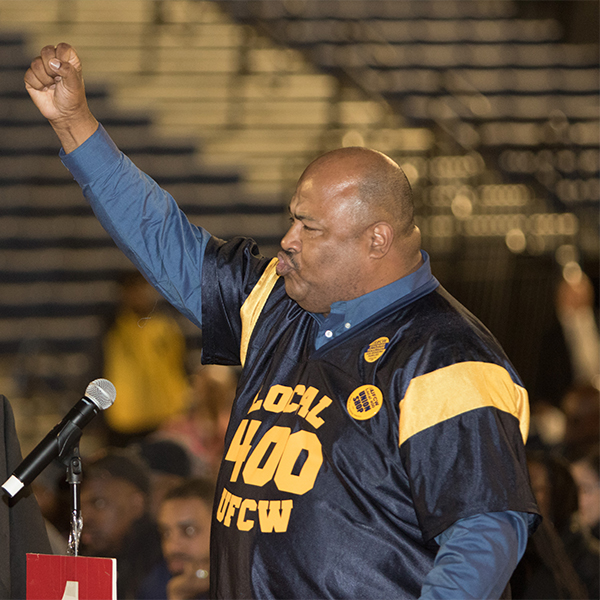 John Ruiz gave a fiery speech and received a standing ovation at the Safeway contract ratification meeting in November 2016.

A night grocery manager at Safeway #1365 who served on the Bargaining Advisory Committee, John went into his store, gave his co-workers an update, made up signs saying “Giant workers, we are with you until the end,” took photos, and posted them online. He also got each of them to “adopt a Giant” and commit to picketing or helping their sisters and brothers in other ways if a strike took place.

“I told them, ‘we might have an agreement, but don’t expect it to always be this way,’” John recalled. “‘Next time it could be us. We might wear Safeway uniforms, but Giant members are our brothers and sisters, and we’re in this fight with them until the end.’”

John showed this same spirit of unity and leadership at the ratification meeting on November 16th, when he gave a fiery speech and received a standing ovation.

“Management came crying claiming employees cost too much,” he told his sisters and brothers. “They blamed us for not being able to man the stores. They claimed we were paid too much. We took that as a slap in the face. It was appalling to hear what the company thinks of us. But we’re the ones who keep the engine running. The companies’ proposals were extra motivation for us. In the end, we accomplished our goal of achieving a fair contract, with no extra health care costs and our pay increases. We defeated all cuts. The contract is very good compared to where we started. This is a win for all of us. United we stand, divided we fall. Solidarity is the only way. Union strong!”

In explaining why Local 400 overcame enormous adversity to win a fair contract, John said. “Solidarity was number one. Sticking together and being there for all of us. No matter how high that mountain was, we were going to climb it until we reached the peak. This was a total team effort.

“I was glad to be a part of the Bargaining Advisory Committee,” he added. “Tough as it was to sit across the table from management, hear them claim the stores are understaffed because we’re paid too much, even though they’re all profitable, and not be able to give them a piece of my mind back, I enjoyed being a part of it every single day. As the end result will tell you, it was well worth it—very gratifying.”

John has worked at Safeway for nearly 30 years and his leadership skills were clear to his co-workers for much of this time. Approximately 10 years ago, when his store needed a new shop steward, his sisters and brothers voted him in even though he was out on workers’ compensation after injuring his ankle in an accident with a powerjack. “They told me, ‘we know you’ll stand up for us and fight for us,’” he said. “I enjoy helping the employees out and working to make sure that no one takes advantage of them or violates the contract language.”

John has also gotten involved in other battles for his union. On November 29th, he spoke at a “Fight for $15” rally in Richmond, where the local NBC News affiliate aired footage of him saying, “Minimum wage workers should not have to work a full week and still have to worry about putting food on the table for their families or paying their rent on time.”

Looking to the future, John is ready to help his brothers and sisters out in any way possible. “I’m always there to do my part, no matter how small or how large, to make sure our union stays strong, that we fight for working families, and that we fight to keep and enforce language in the contract that treats employees the right way,” he said. “Too many times the contract isn’t followed, which is why so many grievances are filed. That’s why we need strong shop stewards who are not intimidated or scared to approach management, and who have been trained in how to handle grievances.”

John is a resident of Springfield. He’s married with 18- and 20-year-old children, and has two stepchildren, as well. And for him, being a Local 400 member has meant everything. “It has given me an opportunity enjoy life and have a secure job,” he said. “I was born in Trinidad. I came here with just $50 and one small bag of clothes. I signed up right away and everything I have now, I owe to Local 400. It’s given me great opportunities, helping me rise from courtesy clerk up to grocery manager. And our union is always there when we need it—including for me. I am so grateful for everything.”