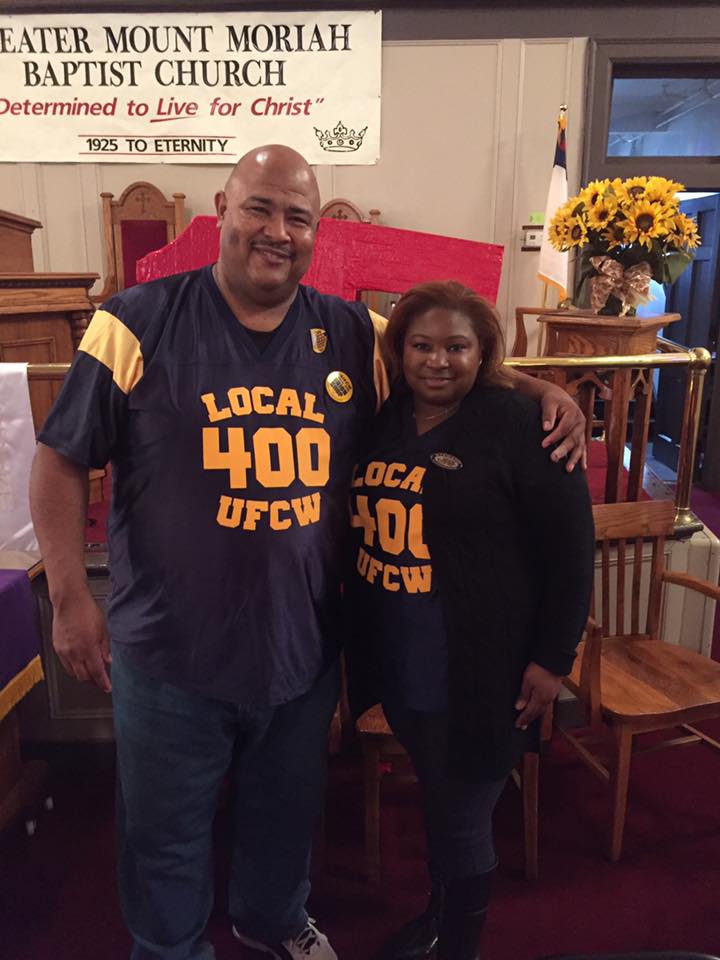 Taralyn Pike (right) poses for a photo with fellow contract action team member, John Ruiz (left), after speaking at a Fight For $15 rally in Richmond in November.

In her five years working at Giant, Taralyn Pike loved what her union did for her, but grew frustrated by what she saw as “a great deal of unhappiness at my store.” So she decided to do something about it.

Approximately five months ago, she stepped up to become a shop steward at Giant #748, where she works as a clerk. And she went beyond that, becoming an activist who played a central role in mobilizing members around the recent round of contract negotiations with Giant, and in fighting for a higher minimum wage in Virginia.

“I wanted to put myself in a position to bring some happiness into the workplace,” Taralyn said. “Who wants to work in a place where it seems everyone’s out to get you and you don’t feel secure? But now, I feel like my store is a place where we can be happy. The manager and I work together to make sure everyone is on the same page. My team members know they have a shoulder to lean on as well as to cry on.

“As a steward,” she added, “I now have a better understanding about employee rights and how things work. And I’m a better listener than I was before.”

Taralyn attended Local 400 trainings for shop stewards and activists, and soon joined the Contract Action Team around the Giant and Safeway negotiations.

“The whole experience was great,” she said. “I got to see a totally different side of Giant—the side where we come together as a group to be our brothers’ and sisters’ support system. We went around to different stores, sat down with every employee, listened to their concerns, fixed some issues, and explained how we ARE the union. We came together as a whole and showed everyone that we were here and we weren’t going to budge until Giant and Safeway workers got what we deserve.”

Taralyn and the other Contract Action Team members petitioned outside stores, got employees and customers to sign, and gained community support. Then, when Giant refused to budge in bargaining, they picketed. And the end result was a strong collective bargaining agreement.

“I feel like it turned out great,” Taralyn said. “Solidarity did the job. We got a great contract. It wasn’t perfect, but we didn’t lose anything and we gained something.

“There’s still more work to be done,” she said. “and now we’re working toward what we need to do to get the change we need in the future.”

Recently, Taralyn also traveled to Richmond to join the fight for a $15 minimum wage in Virginia. She met with other Local 400 members and unorganized workers in the fast food and retail industries, and spoke on a panel about why all workers should be paid enough to live above the poverty level. “It was very informative,” she said. “I was honored to be able to tell my story and encourage everyone to stay united in solidarity.”

Looking to the future, Taralyn said, “I want each and every union worker to go throughout their career and job feeling appreciated for the hard work that they do. I want to educate and advocate as much as I can. Wherever God takes me at this point, I’m on board.”

A resident of Arlington and the mother of nine- and 12-year old boys, Taralyn said, “Being a union member means so much. It means we are not alone. There are always people to help you; always someone you can call. And there are ways to get involved outside the store. I can testify that stepping up is always worth it.”