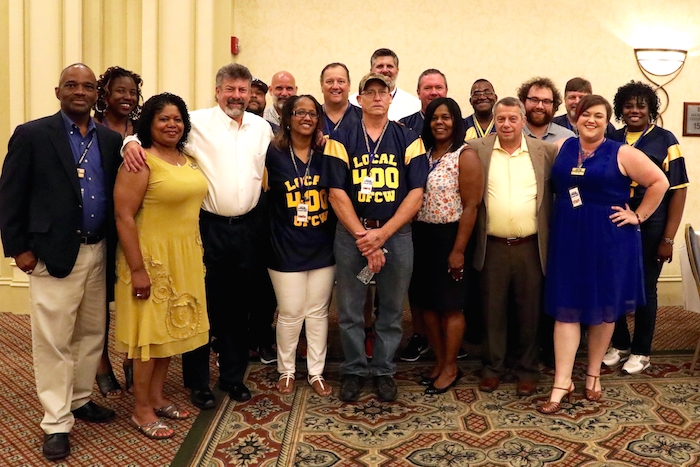 Check out more photos from the day on the Local 400 Facebook page.

Workers from the nation’s only Lipton tea plant voted overwhelmingly to approve their first union contract at a mass meeting in Suffolk on Monday, July 24, 2017.

This represents the first time in the history of the plant when workers were given the opportunity to vote on the terms and conditions of their employment.

“It was a long process, but we couldn’t be happier with the outcome,” said Anita Anderson, an Operator at Lipton for 11 years.

The contract covers 240 employees at the facility and includes significant improvements to working conditions and healthcare benefits. The union deal will result in many workers saving more than $4,000 a year on healthcare costs while greatly improving coverage.

“Our new healthcare plan is a huge weight off my shoulders. Personally, I take medication every day and I can’t go without my health insurance. But I’m also a dad, and saving $4,000 a year goes a long way for me and my family,” said Terrell Owens, who has worked as an operating technician at Lipton for the past nine years.

Last Spring, several people working at the Lipton facility reached out to the UFCW to explore the possibility of forming a union at the plant. At the time, many workers were required to work up to 12-hour shifts for as many as 13 days in a row with only one day off in between. The widespread practice of forcing employees to work overtime was known as “drafting” and went on for several years.

“A lot of us missed a lot of quality time with our families because of our forced commitment to the company – times that we will never get back,” said Robert Davis, a maintenance technician who has worked at the plant for more than 25 years.

The union contract places strict limits on when management can require employees to work overtime. The agreement provides workers with four days per year to opt out of mandatory overtime, in addition to two weekends off each month in which they can’t be forced to work overtime.

In an election last August, a majority of workers at Lipton voted to unionize with Local 400. Negotiations on the first collective bargaining agreement at Lipton began last Fall. A team of eight Lipton employees served as the union’s bargaining committee and lead negotiations with Lipton representatives that resulted in the contract ratified today.

“For the last ten years, we saw so many of our benefits taken away,” said Paul Garrison, a 16-year mechanic. “But now that we have a union, we’re getting them back again.”

Philip Surace, a mechanic at Lipton, said his first experience with a union was when he called UFCW Local 400 last Spring. “I didn’t know much about unions, but I knew something had to be done. Enough was enough. I was looking for help and the union sent people right away.” Philip quickly pulled together a meeting with his coworkers to learn about their rights to form a union. “Two months later, we had our union. I would encourage anyone who wants to make their workplace better to do the same thing we did.”

Lipton is owned by Unilever, a British-Dutch multinational corporation jointly headquartered in London, U.K. and Rotterdam, Netherlands. The Lipton plant in Suffolk has operated for more than 60 years and produces nearly all of the Lipton tea sold in North America.

Check out photos from the ratification vote on Facebook.