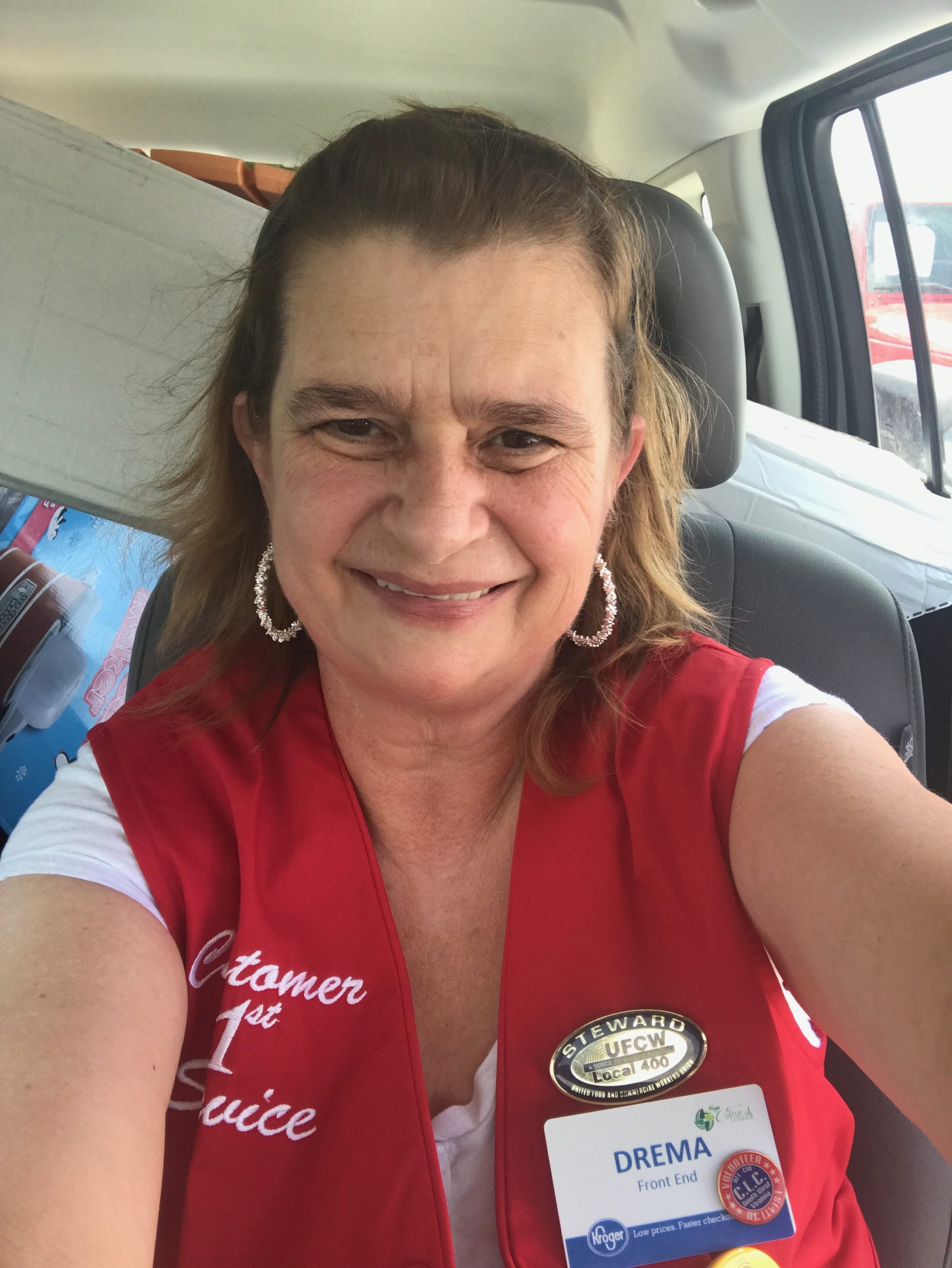 Drema Trent, a shop steward at Kroger #322 in Vinton, Va., won raises for ten courtesy clerks at her store by enforcing the contract.

If you work at a Kroger store in the Roanoke region, you know courtesy clerks have a tough job to do.  They are the lowest paid employees in the store and have little to no opportunity for advancement.

Kroger justifies this practice by saying courtesy clerks are only responsible for a limited set of duties – such as bagging groceries and returning shopping carts. If a courtesy clerk is assigned work above and beyond their normal duties, he or she is supposed to get paid more for doing that work. But we all know that more than not, Kroger is cheating these workers out of the higher pay they deserve.

When Drema Trent saw courtesy clerks working the cash registers at her Kroger store, she decided to do something about it.

A shop steward and front-end clerk at Kroger #322 in Vinton, Va., Drema took photos of every courtesy clerk working a register. She talked with them and had them sign forms testifying that they were assigned work beyond the scope of a courtesy clerk’s responsibilities. She then sent the information to her Local 400 representative, Steve Meador, who verified the details and took it to management.

The result? Ten courtesy clerks were promoted to front-end clerks and given raises. And Kroger now faces arbitration over whether the store violated the contract’s “three strikes” policy against misusing courtesy clerks, which would eliminate the position entirely.

“It felt really good to enforce the contract and get results for the young men and women involved,” Drema said. “They were really happy about it. And it improved morale on the front end.”

Drema makes it a priority to sign new employees up as Local 400 members—and this action certainly provided a reminder about why joining their union is the best investment they can make in their future. “I’ve got a good rapport with the younger people,” she said. “I explain to them what a union is, since many of them don’t actually know that. I talk about how our union gets them better wages and benefits, and how if you ever get in trouble, you won’t have to go alone, one of us will be with you to make sure you’re treated fairly.

“I also discuss how fantastic our insurance is,” she added. “I was in a car accident last year and had to be out for more than half a year. My health costs were covered and our union paid me for six months.

“And then I talk about my daughter, who’s 22, started at Kroger when she was 14, and now works full-time with full benefits,” Drema said. “This also makes them see the advantage of joining Local 400.”

Drema started at Kroger 10 years ago. It was her first union job, and the fact that workers had Local 400 representation was a big reason why she wanted to work there. She became a shop steward nearly two years ago. “I have kind of a big mouth,” she said, “and knew everybody in the store, so it seemed like a natural thing to do.”

She attended some of the union meetings last year during negotiations over the current Kroger-Roanoke contract. “It was the first time I’d been to one and it was a very powerful thing to witness,” she recalled. “I’d like to be involved in future negotiations.”

For Drema, Kroger is a family business. In addition to her 22-year-old daughter, Katie Robertson, her 33-year-old daughter, Jennifer Trent, also works at Kroger and is interested in becoming a shop steward. She also has a 24-year-old son who worked at Kroger for five years before moving to another job, and an older son who is 36. She lives in Thaxton.

“It’s really important to have a voice to speak for you other than just yourself,” Drema said. “If you’re at Kroger, you have somebody on your side—your union. And I think we have 10 of my Local 400 sisters and brothers at my store who can testify to that.”