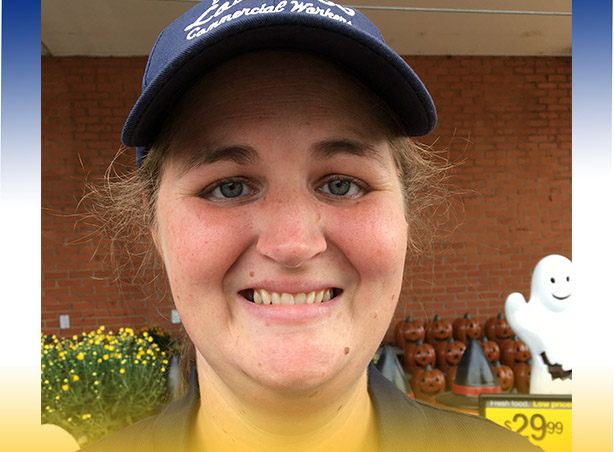 Nicole Boyd had had enough.

A shop steward and florist at Kroger #326 in Lynchburg, Virginia, she was tired of seeing managers doing work that was supposed to be assigned to her coworkers, while Local 400 members working part-time weren’t getting the hours they wanted and needed.

“The managers are constantly stocking shelves,” Nicole said. “On any day, you can walk in and find a manager stocking. Sometimes there’s three or four. Some days, they even bring in co-managers in from other stores, rather than giving part-timers the hours they want.”

So Nicole decided to do something about it. She took photos every time she saw a manager stocking shelves. She did the legwork to identify the name of each manager who came in from another store. And then she sent the photos to her Local 400 representative, Phil Frisina.

“Some managers told me I wasn’t allowed to take pictures of them,” she said. “But they have no expectation of privacy because they’re on video the whole time they’re in the store. So I just kept snapping away.”

At the same time, Nicole talked with part-timers who wanted more hours and weren’t getting them. She persuaded many of them to sign forms testifying to this.

Thanks to her tenacity in documenting these repeated violations of her union contract, combined with follow-up work by Local 400 staff, the company was forced to pay the wages of part-timers who should have been doing the stocking that was being performed by managers. Everyone who signed the forms and was denied hours they should have had was paid for those hours.

Despite this great victory, Nicole said, “They haven’t stopped. This week, there were three managers on duty who were stocking. They don’t care. Meanwhile, Kroger keeps cutting hours. So I’m going to keep taking pictures and keep doing what I’ve been doing.”

Nicole brings an unusual background to her activism as a shop steward. She started working at Kroger in 2012, but didn’t join Local 400 until last year’s contract fight, even though her husband, Kroger #408 head meat cutter Kenneth Boyd, was a member and was urging her to do the same.

“When we voted to authorize a strike, I decided I’m not crossing a picket line and I want a say in our contract and the protections we receive on the job,” Nicole said. “And shortly after I joined, I was asked to be a shop steward and I proudly agreed to do so.”

One of her top priorities ever since has been to sign up new members—and her journey to becoming a Local 400 member, shop steward and activist has been a powerful tool in doing so. “I tell them my story,” Nicole said. “I say, ‘I was anti-union and didn’t see why I needed to be a member. I know exactly what you’re thinking; I’ve been in your shoes. But the way Kroger is being run, and the way management tries to make us do more with fewer resources and not enough pay and hours, all of us really need our union now.’ I tell them the way it is. And they usually sign up.

“Just in the last year, there’s a lot more pressure on workers to stock more stock,” she explained. “They want us to work faster and faster, and it’s gotten to the point that some people work right through their breaks and lunches to do all that’s demanded of them because they’re afraid of being fired. Of course, at the same time, management is also insisting that we greet every customer and walk with them when they need to find things. This can’t continue or else turnover – which is already way too high – will go through the roof.”

A resident of Bedford, Nicole plans on continuing to fight for her Local 400 sisters and brothers, to improve working conditions, and to hold Kroger management accountable for as long as it takes. She has already made a profound positive difference in the lives of fellow members, and she’s going to keep doing more to right the wrongs she sees.