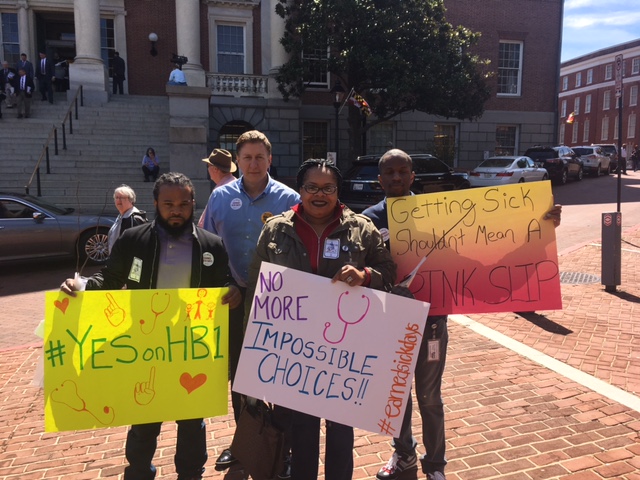 A team of Local 400 members played a pivotal role in winning passage of the Healthy Working Families Act in Maryland.

Local 400 Shop Stewards Darlene Butler-Jones and Bill Osborn had never gone to Annapolis to meet with their state legislators, testified before the Maryland General Assembly or spoken out at rallies before. So when they were asked to help lead Local 400’s campaign to pass the Healthy Working Families Act, they were a bit taken aback. But after four months of working full-time to make paid leave a right for all Maryland workers, they were fired up and thrilled with the results.

“I wouldn’t trade it for a dime,” said Darlene, who is a meat cutter at Giant #347 in Largo. Bill, a dairy clerk at Giant #339 in La Plata, echoed her sentiments, saying, “It was a really enriching experience.”

Darlene, Bill and three of their Local 400 brothers and sisters played a pivotal role in winning passage of the legislation by a 29-18 vote in the Senate on March 16 and an 87-53 margin in the House on April 7. The bill would allow full-time and part-time workers at Maryland employers with 15 or more employees to earn one hour of paid sick leave for every 30 hours worked, up to five full days per year for full-time workers, benefiting more than 510,000 Marylanders who are currently unable to earn paid sick leave.

Darlene Butler-Jones (left) poses for a photo with a fellow Local 400 member. Darlene was part of a team of union members gathered support for the Healthy Working Families Act in Maryland.

For Darlene, this was personal. “When I started work at Giant 20 years ago, I was widowed with young children,” she said. “I had no sick leave. When my children came home with bumps and bruises or when they got sick, I had to choose between their health and my paycheck. That’s a position no one should ever be placed into.”

Bill Osborn testified about the challenges the single mothers he works with face. “I see them struggle when their kid is sick,” he said. “If they can’t take their kid to day care, how do single parents make it if they don’t have paid leave?

“It’s only fair to have paid leave,” Bill said. “Employers owe it to their employees.”

Darlene and Bill were invigorated by their experience. “It’s been very educational because I’ve learned a lot—I didn’t know how long and tedious it is to get a law passed,” Darlene said. “But it’s rewarding, too—you get to meet people from all walks of life telling their stories. You realize how sick leave and a higher minimum wage means so much and makes people better citizens and more productive workers.

“Today, I can tell my 12-year-old granddaughter, ‘When you go to work, you’ll have paid sick leave, and you can know that your grandmother and her friends were a part of making that happen,’” she said.

“From the very first day, the first rally in Annapolis, we learned the process,” Bill said. “We encouraged our members to support the bill. We canvassed door to door in certain areas. We sat in on a lot of the committee meetings and legislative sessions. Each of us testified and talked about how it affected us.

“It was so satisfying knowing we were there from right at the beginning to all the way when the bill was sent to the governor,” he said. “It was inspiring and it motivated me to be more involved in other bills and to take steps in our union to help others understand the process.”

Gov. Larry Hogan (R) has threatened the veto the Healthy Working Families Act. Darlene, Bill and the three other team members are mobilizing public pressure on Hogan to sign the bill, but if he vetoes it, they’ll fight to get the House and Senate to override his vetoes. If no senator and delegate changes his or her vote, then the override will be successful and the bill will become law.

“If he vetoes it, I’ll be right back doing this all over again,” Darlene said.  “Without a doubt. Call me and I’ll be there.

“Each and every Local 400 member should get out, stand up for themselves, learn about politics and don’t be afraid to talk,” she added. “That’s the real lesson of this experience.”