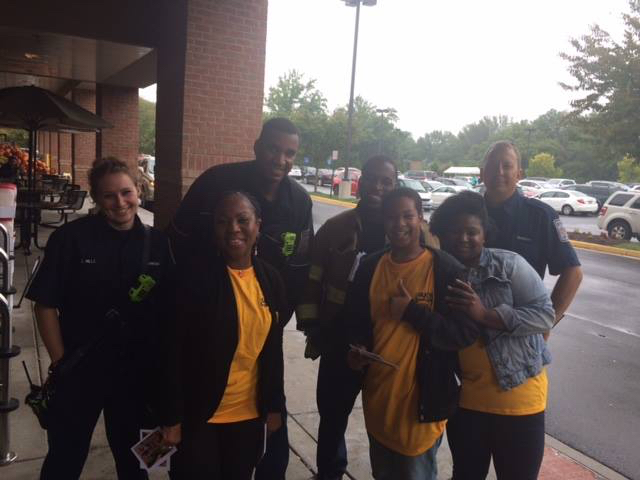 At a Safeway in McLean, Virginia, members of the local firefighters union were happy to lend their support and pose for a photo with Local 400 members.

Over the weekend, thousands of customers signed cards to store managers at Giant and Safeway expressing support for Local 400 members as we negotiate a new union contract.

Customers were eager to support employees calling for fair wages, affordable healthcare, and a secure retirement.

“We received such overwhelming support from customers that we literally ran out of cards,” said Stephanie Pryor, who works as a receiver at a Giant in Silver Spring, Maryland. “We could have printed 4,000 more copies and we probably would still have run out.”

Many customers were union members themselves and clearly understood what’s at stake in our contract negotiations. As one shopper in Washington, D.C. explained, “union is always the way to go.” At a Safeway in McLean, Virginia, members of the local firefighters union were happy to lend their support and pose for a photo with Local 400 members.

As negotiations go on, we’ll continue to engage customers and build support for the hardworking men and women at Safeway and Giant. It is our hard work that makes these companies successful and we deserve to share in that success.

As we negotiate our next union contract with Giant and Safeway, we’re committed to keeping you informed every step of the way. By signing up for text alerts, you’ll get the latest updates immediately!

Your wireless provider’s message and data rates may apply – you may opt out any time by texting STOP to 698329.