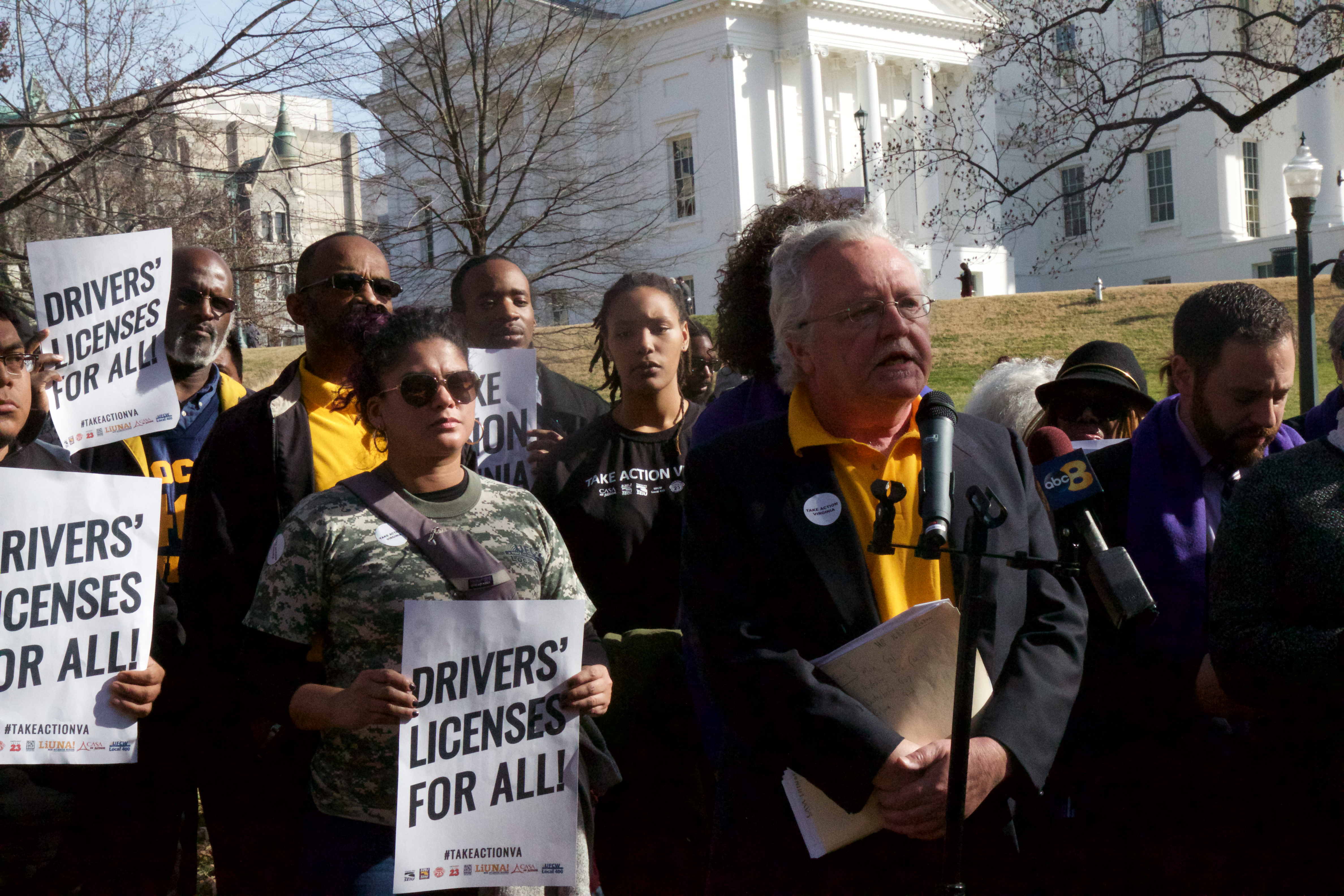 UFCW Local 400 member Rick Howell, who works at a Kroger store in Roanoke, speaks to a crowd at the #TakeActionVA rally in Richmond on Thursday.

Take Action Virginia members and a number of state elected officials called on the Virginia legislature to answer the plea of working families who demand a $15-an-hour minimum wage and immigrant-rights activists who know that granting driver’s licenses to undocumented immigrants is beneficial to the economy of the Commonwealth.

More than 250 people attended the rally outside the state capitol.

“Driver’s licenses are very important for everyone,” said state Sen. Scott Surovell, D-Fairfax. “That is why I continue fighting for them every year until it passes.”

Legislators from both parties support a measure to authorize driver’s licenses to immigrants working in Virginia, who alone contribute $5.5 billion in gross state product to the state economy.

At least 12 states and the District of Columbia have passed similar legislation. Having a state-issued form of ID allows undocumented people to open checking accounts, and also allows law enforcement officials to have positive and verifiable form of identification when detaining individuals.

In addition, advocates called on legislators to increase the state’s minimum wage to $15 by 2021. California, New York and the District of Columbia have passed similar legislation, along with several cities and municipalities.

“Every job in Virginia should be a good job,” said Lt. Gov. Ralph Northam. “I know first-hand, it is impossible for Virginians to, not only support themselves, but much less to support their families on $7.25 an hour. It’s time to give yourselves a pay raise.”

While the minimum wage in Virginia is only $7.25, an individual living in the city of Richmond requires an hourly wage of at least $11.93 to cover the cost of living, according to Dr. Amy K. Glasmeier of the Massachusetts Institute of Technology. That number more than doubles if the individual has just one child to support.

“It’s time for us to turn the tide,” said Del. Sam Rasoul, D-Roanoke, who introduced the legislation to increase the federally mandated minimum wage up to $10 an hour this year and to $15 an hour by 2021. “So we’re gonna stand up.”

The measure has the support of Richmond Mayor Levar Stoney, who emphatically rallied the crowd.

“Poverty knows no race, no color, no gender,” Stoney said. “I’m committed to the principle that everyone has an equal opportunity. That means a $15 min wage.”

People who would be directly affected by a minimum wage increase also spoke up.

“I’ve seen the anguished look on the faces of my coworkers when they can’t pay their bills,” said Rick Howell, a grocery clerk from Roanoke and member of UFCW Local 400. “The fight against corporate greed is the most important. The middle class is disappearing fast.”