Member Spotlight: Rick Howell, Union Through And Through 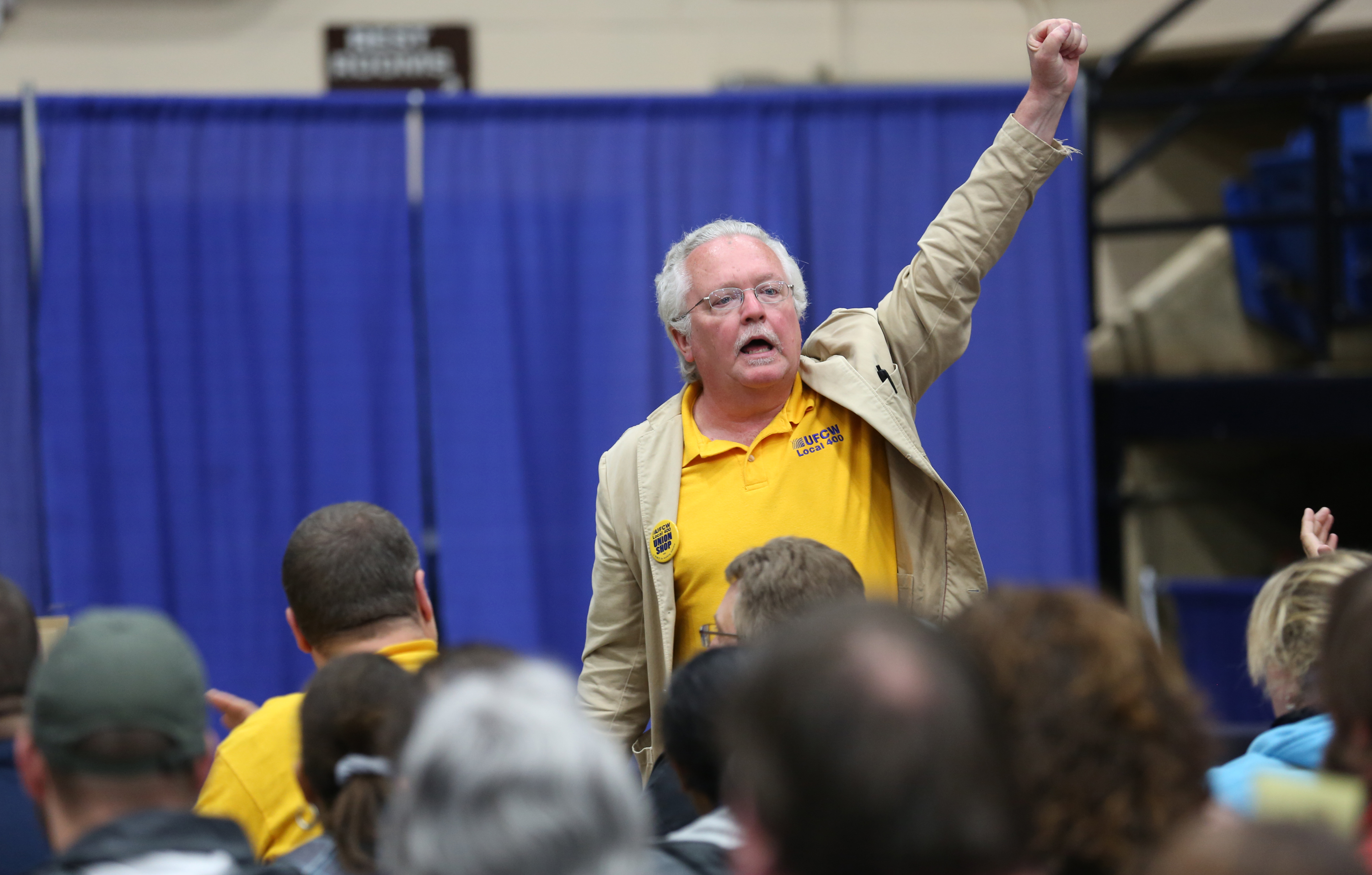 Rick Howell, a nine-year Kroger associate from Roanoke and member of the 2016 contract bargaining team, addresses his fellow UFCW members at a recent contract vote in May.

When Rick Howell started working at Kroger nine years ago, no one had to tell him why he should join Local 400. Rick’s father worked at Rubatex in Bedford, Va., where he was a proud member of the United Rubber Workers (now part of the United Steelworkers). “He took me to union meetings when I was eight or nine years old,” Rick said of his father. “Even though I didn’t understand everything they were saying, I could tell this was serious business. It really made an impression on me.

“Working people built this country,” Rick said. “I saw my father struggle to support his family on one salary, but back in the ‘60s, with a union contract, you could do that. Today, the middle class in this country has just about been destroyed. That’s one of the tragedies of modern America and only organized labor can fix that.”

A cashier, front-end supervisor, and shop steward at Kroger #375 in Roanoke—and a board member of the Western Virginia Labor Federation—Rick’s strong union perspective served his union well in the just-completed round of bargaining with the company, which was the most contentious in decades.

“I think management showed some ignorance about how the working class in America lives,” he explained. “They make good salaries and they’re sitting across the table from people making $9, $10, $11 an hour. The income gap at Kroger reflects the larger gap in America between corporate CEOs and workers which has only ballooned in recent decades. All we asked them to do is put themselves in our shoes, but they didn’t seem to be able to do that.”

As a member of the Kroger Bargaining Team, Rick strongly supported the May 18th strike authorization vote as critical to getting the collective bargaining agreement that was ratified on June 8th. “We weren’t satisfied some of the specifics in the deal, but overall, we stood up to them and got a better offer,” he said. “It was a hard-fought process, and we had to make tough decisions, but in the end we got the best deal available. It’s something to build on.”

“I was glad to be a part of the committee, and I’m glad we have a contract, after long bargaining hours and hard work,” Rick added.

Rick brought to his work on the Bargaining Team several other unique perspectives—a career as a journalist and decades of work as a political activist. Before joining Kroger, he worked as a reporter and political columnist in Tennessee, Kentucky and Virginia for 12 years. He currently writes a regular column, “The Liberal Agenda,” for the Bedford Bulletin, giving him a perch from which he discusses the plight of working families and what politicians are—or are not—doing to make life better. For example, in a column last fall on where candidates stood on raising the minimum wage, he wrote, “When people make more money, they spend it, and spending helps the economy. It allows working people to live better, and it spurs economic growth that later creates more jobs. It certainly does not ‘destroy’ the free market system.”

Rick also takes a leadership role electing pro-worker candidates to public office, with direct involvement in the Virginia AFL-CIO’s get-out-the-vote drive each year. “Labor’s political operation is so much more effective than that of the Democratic Party,” he said. “As someone whose first political efforts involved stuffing envelopes for Jimmy Carter in 1976, I’ve never had more fun or seen better results than with the labor GOTV effort.

“I’m grateful to Local 400 for giving me this opportunity every campaign season,” he added, “along with the chance to be a leader in my store and to help people who really need help.”

A Roanoke resident and father of a 20-year-old son, Rick is a role model of member activism, and a strong advocate for it, too. “You know the old saying about how most of life is just showing up?” he said. “We’d gain a lot just by having more members show up at meetings, and be engaged in their union all the time, not only when there’s a crisis.

“What I enjoy is being the face of our union in the store,” Rick said. “I wear my Local 400 button every day and people know they can come to me with any questions. I seek out new employees, whether I’ve been introduced to them or not, and talk to them about their union. The greatest calling is to help people, and knowing I can do that helps me sleep well at night.”