Workers at Nation’s Only Lipton Tea Factory Vote to Unionize 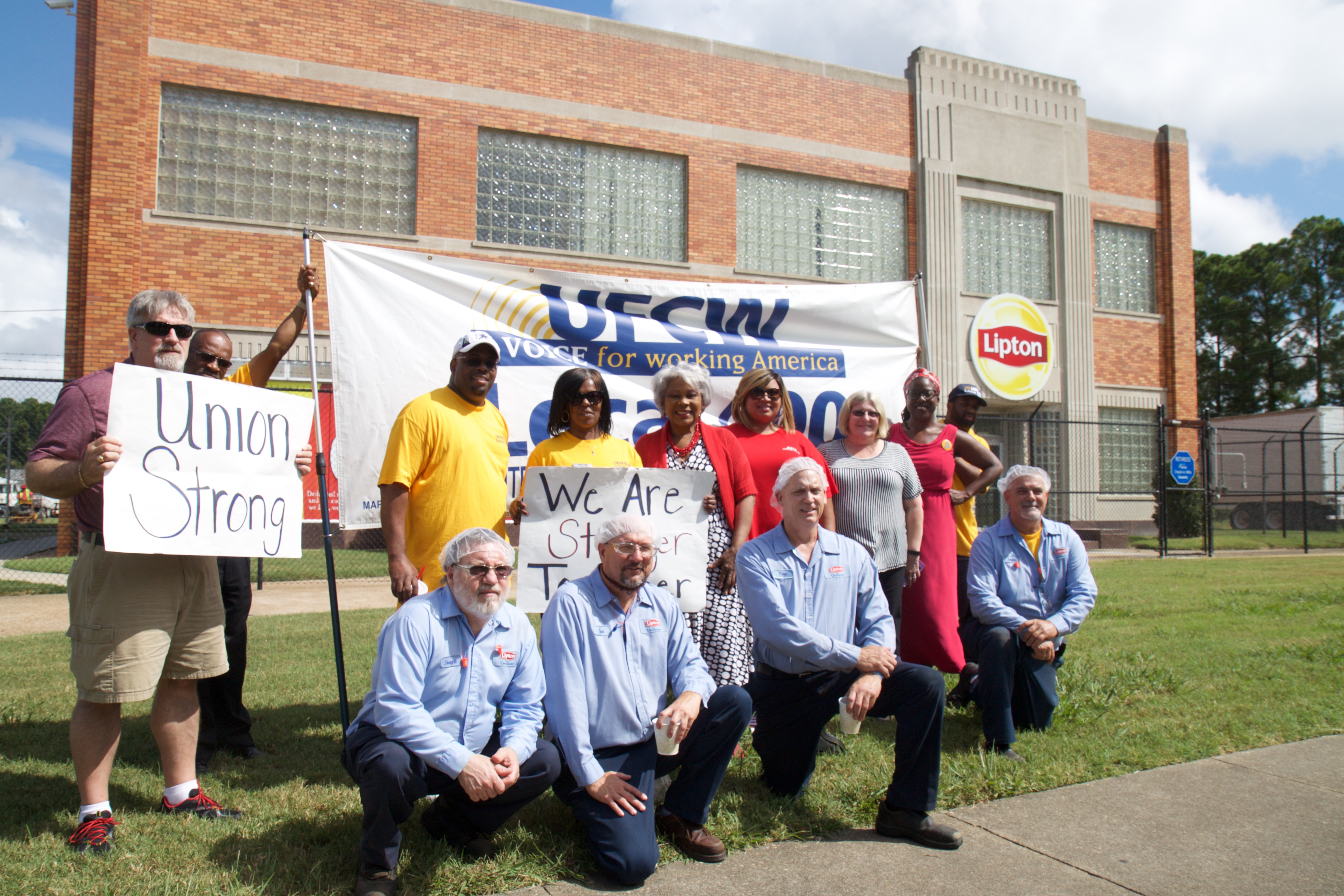 Lipton workers announced the victory at a press conference outside the plant on Monday, August 29. They were joined by several supporters, including Virginia Senator L. Louise Lucas, Doris Course-Mays, President of the Virginia AFL-CIO, and Renee Browder, Financial Secretary Treasurer of ATU Local 1177.

“I woke up this morning feeling wonderful,” said Lisa Gayle, who’s been with the company for 14 years. “As a unified group, now we can make Lipton the best place it can be. I’m so excited!”

The Lipton plant has operated in Suffolk, Virginia for more than 60 years and produces nearly all of the Lipton tea sold in North America. More than 200 employees currently work at the plant, but that number could as much as double in the coming months as the company expands its workforce.

“I couldn’t be happier to welcome such a wonderful group of people into the UFCW family,” said Mark Federici, President of UFCW Local 400. “Their courage, commitment and tireless efforts bolstered my faith in the power of working people to stand up for themselves and improve the lives of all hardworking men and women.”

On Monday morning, the workers held a press conference outside the plant to announce the victory.

“For the last ten years, we’ve seen our benefits decline. By standing together as one, as a union, we hope we can stop the bleeding now before it’s too late,” explained Alvin Brown, an Operations Technician who celebrated his 21st year with the company on Monday.

“I’m so proud of all of us for coming together and standing as one,” said Rodney Hart, who has worked at the company for 24 years. “We come a long way in a few weeks, and now we have to stand as one and support each other in order for our union and our company to be the best at what we do.”

The workers were joined by several supporters, including Virginia Senator L. Louise Lucas, who represents the district where the plant is located.

“I just wanted to say how proud I am of what you’ve accomplished here,” Senator Lucas told the workers in attendance. “It takes a lot of hard work and courage to do what you’ve done and I know our district is better off for it. I know you’ve worked hard to make Lipton the success it is today. Congratulations on taking the bold step to form a union and stand up for your rights at work.”

“Welcome to the union family,” said Doris Course-Mays, President of the Virginia AFL-CIO, who also attended the event. “You may not know this, but you’re not alone. You have union brothers and sisters throughout the Commonwealth of Virginia behind you today.”

Renee Browder, Financial Secretary Treasurer of ATU Local 1177, the union of transit workers throughout the region, echoed the sentiment. “Unions are all about unity – not just unity with your brothers and sisters at work, but unity with everyone that works hard for a living. When we stand together, we all do better.”

Earlier this year, several people working at the Lipton facility reached out to the UFCW to explore the possibility of forming a union at the plant. At the time, many workers were required to work up to 12-hour shifts for as many as 13 days in a row with only one day off before doing it again. The widespread practice of forcing employees to work overtime was known as “drafting” and went on for years. The workers claimed they needed the guarantees and protections of a union contract to ensure fair treatment and accountability from plant management, including putting an end to involuntary overtime drafting.

“We just want a voice. A lot of us missed a lot of quality time with our families because of our forced commitment to the company – times that we will never get back,” said Robert Davis, a maintenance technician at the plant who recently marked his 25th year with the company. “Now, we’re looking forward to having a seat at the table and negotiating a fair contract with Unilever.”

Following last week’s vote, the workers will now collectively negotiate their first union contract with Unilever, the parent company of Lipton, which could cover several aspects of employment, including wages, benefits, safety measures, and workplace policies.

“I have such a wonderful group of coworkers,” explained Anita Anderson, who has worked at the plant for 10 years. Like many of her coworkers, she’s looking forward to the next step in the process. “Whether you voted for the union or not, whether you’re a worker or a manager, now it’s time to move forward, together. Let’s let our unity and smiles warm the hearts of many. Working together is the only way we will ensure we have a fair contract that treats us all as equals.”

With the support of their union, UFCW Local 400, the workers will begin the bargaining process by surveying coworkers to gather input on their first contract, then forming a committee of employees to negotiate with management. Once negotiators reach a tentative agreement with the company, the proposal will be presented to the entire workforce for a ratification vote. The contract will take effect once ratified by a majority of the workers.

Last week’s vote by a majority of workers at Lipton means the employees will soon collectively negotiate a union contract, which will apply to all employees once ratified, but does not require the workers to join the union to receive the full benefits and protections of the contract. Because of the state’s so-called “right to work” law, union representatives in Virginia are required to provide their services for free to all workers, even if the employee is not a member of the union and does not contribute to covering the costs of union representation.

While many companies notoriously fight tooth and nail to prevent their employees from exercising their right to form a union, Unilever’s own Human Rights Report states the company is “committed to the right to freedom of association and collective bargaining.” In a letter to employees earlier this year, Lipton factory director Katie Ingersoll emphasized the company’s commitment to “remain neutral when it comes to employee’s right to organize.”

“We must commend Lipton and Unilever for upholding their commitment and honoring their employee’s right to organize,” said Tiffany Flowers, Director of Organizing at UFCW Local 400. “Too many companies intimidate, threaten, or even outright fire workers who dare to exercise their right to have a voice on the job. We’re happy to say that wasn’t the case here.”