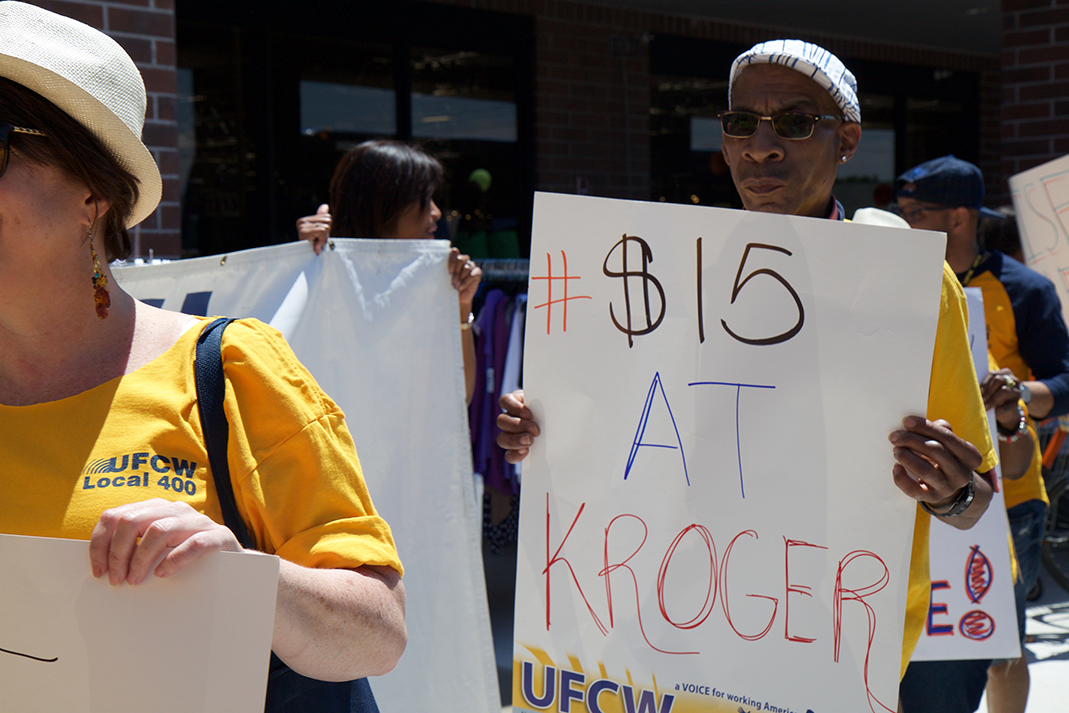 On Saturday, August 13, thousands of people like us will be marching through the streets of Richmond calling for a $15 minimum wage and union rights. Can you make it?

The Fight for $15 has grown to become a household name in our country for a reason. Thousands of hardworking men and women have refused to stay silent about the challenges of making ends meet on today’s poverty wages.

Just look at the facts. Nearly 64 million Americans work for less than $15 an hour, including many members of Local 400. Over the last few decades, the real value of our wages has plummeted. Today, the minimum wage in Virginia is only $7.25. But in 1968, it was $1.60 –equivalent to $11.08 today. Not only that, we’re more productive today than we were in 1968. If the minimum wage kept pace with our productivity, it would be $18.85 today!

Even if you make more than the minimum wage, your pay is affected too. When the value of the minimum wage goes down, so does the value of your paycheck. It’s simple: the lower the bottom goes, the deeper we all sink. That’s why we’re fighting to raise wages up and down the scale – because like the saying goes, a rising tide lifts all boats.

It’s not that Kroger can’t afford to pay more. Kroger made $2.4 billion in profits last year. Kroger’s CEO, Rodney McMullen, was richly rewarded for your hard work: he got a 17% pay raise this year. He now makes $11.2 million a year. A part-time Kroger associate making $9 an hour would have to work 1,204 years to make what he made last year alone.

We’re tired of CEOs getting all of the reward off of our hard work while we struggle to make ends meet. We’re tired of working harder than ever but earning less than we did decades ago. It’s time for change.

Join us on Saturday, August 13, for a historic Fight for $15 march through Richmond. We’ll be marching with thousands of McDonald’s cashiers and airport baggage handlers, truck drivers and early education teachers, retail employees and home care workers. And so many others.

To those of you that doubt us, those of you that think we’ll never get $15 an hour (or worse, think that we don’t deserve $15 an hour) – think again. We’re already doing it. Just last month, we passed legislation to raise the minimum wage in Washington, D.C. to $15 an hour by 2020. New York and California have already done the same thing. Seattle, San Francisco, Los Angeles have also gone to $15.

This isn’t just a fight worth winning, it’s a fight we ARE winning. Help us keep up the momentum! Join us on Saturday, August 13 to Fight for $15 at Kroger!