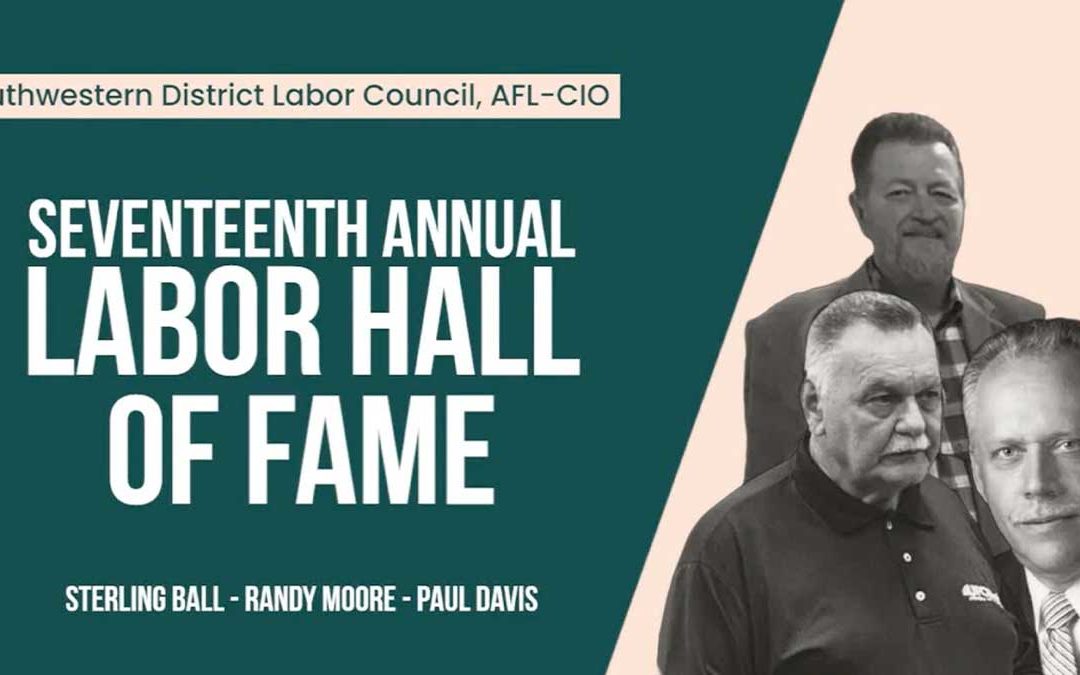 Longtime UFCW Local 400 leader Sterling Ball was inducted into the Southwestern District Labor Council Hall of Fame on October 22 at a dinner in Huntington, WV, where he was honored for his 47-year career as a Kroger worker, Local 400 organizer and vice president, and West Virginia AFL-CIO vice president.

“It was a shock as well as an honor to learn I would be inducted,” Sterling said. “I had no idea I’d be considered. I am sure there are many other people more deserving of this. But when I got to the dinner, I was overwhelmed to see hundreds of people there, including a lot of the brothers and sisters I’ve worked with over the years.

“I have been so blessed to have had a job for over 47 years serving and representing workers,” he said. “But when you have a job doing something that you enjoy, it’s not a job—it’s a privilege.”

Sterling started working at Kroger in Parkersburg, WV when he was in 11th grade. “It wasn’t long before a man came to me and said I needed to join the union, so I did,” he recalled. “I attended my first union meeting in 1965—over 100 people attended. They talked a lot about how our union protected the workers in the workplace and was responsible, through contract negotiations, for getting benefits and better wages.

“This union meeting is where I first heard the words, ‘labor movement’ and that impressed me,” Sterling explained. “I thought, ‘Wow, I belong to some kind of a movement.’ When I got home that night, I looked up those words in the dictionary. ‘Labor’ means work—especially hard physical work—to labor under something, to carry a very heavy load with difficulty. That that fits a lot of workers today. ‘Movement’ means a group of people working together to advance their shared political, social, or artistic ideas—that’s the idea of a union. Put them together and you’ve got ‘labor movement’—a campaign undertaken by a group of people, working together, to declare war on poverty. That’s exactly what a union does.”

Sterling enlisted in the Army as a Special Forces member. He returned to Kroger after his service and quickly became a shop steward. He took the time to learn—and memorize—the specifics of his contract and also ordered pamphlets from the Bureau of National Affairs providing background on arbitration decisions, contract language and sample steward letters that would be helpful in writing grievances and protecting his members. When filing grievances, he was often accused of being an attorney because he was able to cite specific cases and precedents.

That wasn’t all. “At one of our union meetings, our organizer said we need to go out and organize to protect our members and our contracts, and he needed help from us to do that,” Sterling said. “So one day a good friend of mine who worked at Dils Ford in Parkersburg got fired. I told we would start an organizing drive. I asked our organizer for some authorization cards, which he brought to me and showed how to fill them out. When I had a meeting at the labor hall, 90 percent of the employees were there. I signed all of them up, we went to the election and won, and got a contract.

“But then I got a visit from the local president at the time,” Sterling continued. “I found out that these were the only dealerships ever organized outside of the auto workers. I felt good that a little food store union could compete with the auto union.”

Sterling has brought that same spirit to everything he has done throughout his career, which continues even in retirement, as he leads Local 400’s political efforts in West Virginia. “Sterling is one of a kind,” said Local 400 President Mark P. Federici. “He’s a tenacious organizer, a political lion, a fighter for his brothers and sisters, and a pillar of solidarity. He is as responsible as anyone for all of our achievements in West Virginia over the past four-plus decades. While he’s always going to deflect credit to his brothers and sisters, I can’t think of anyone more worthy of the Labor Hall of Fame. I’m honored to call him my brother.”

At the induction dinner, Sterling paid tribute to his Local 400 colleagues, including Vice President and Central & Southern Virginia Regional Director Donna Waddell. “I worked with her and marched with her in Roanoke, Richmond, and Danville,” Sterling said. “I have never met anyone more dedicated to serving our members. She is a very good and close friend. I also have had the privilege of working for some great union leaders, like our present president, Mark Federici. Mark is a good man and a good leader, and after my retirement, gave me the opportunity to continue to serve as political representative in West Virginia.”

Sterling concluded his acceptance speech with a call to action. “Don’t you ever, ever back down, or feel guilty because you belong to a movement,” he said. “Not just any movement, but the labor movement—the strongest, most powerful and proudest movement to be reckoned with. Because we are standing up for the workers. And we are on the same side of doing the same things that the Bible teaches in protecting those who cannot protect themselves.”