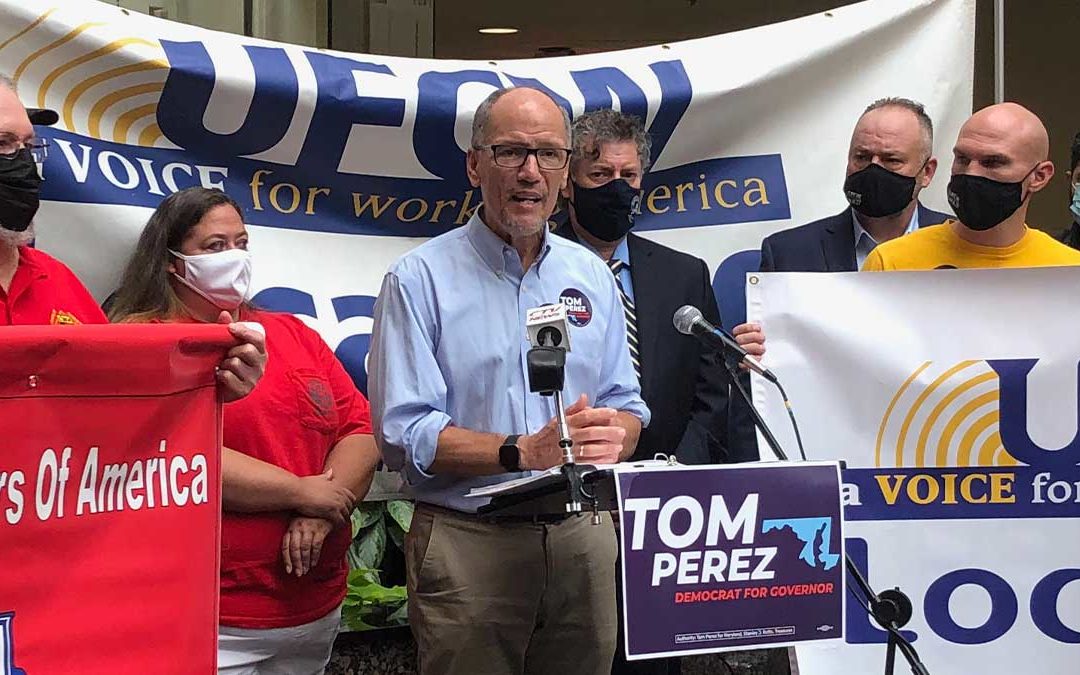 UFCW Local 400 has endorsed Tom Perez for governor of Maryland. Along with nine other unions, Local 400 announced the endorsement at a press event shortly before Labor Day.

“We are proud to endorse Mr. Tom Perez for governor of Maryland,” explained UFCW Local 400 President Mark Federici. “Tom is no stranger to our union – from his time on the Montgomery County council to his service leading Maryland’s Department of Labor, and later the U.S. Department of Labor – Tom has been a champion for hardworking families. And Maryland working families need a champion now more than ever. Our members have been struggling on the frontlines of a global pandemic, enduring long hours and abusive customers without the benefit of hazard pay or even adequate safety measures. Now is a time for bold, decisive leadership and Tom is just the man for the job. We look forward to mobilizing our thousands of essential workers to do everything we can to ensure he is the next governor of Maryland.”

“The last year and a half has really cast a bright light on the nature of work in our country and the critical importance of all of the heroic workers who stepped up and did so much for so many people,” Perez said at the press event. “Some are deemed as essential over these last 18 months…but you have always been indispensable to me, to our country and to our state.”

Mr. Perez has spent his career in public service, fighting for working families. As Maryland’s Labor Secretary, he championed the country’s first statewide living wage law for government contractors. As the U.S. Secretary of Labor under President Obama, he helped to resolve a massive strike by 40,000 Verizon workers fighting to save their health care.

“All across this country, I’ve seen first hand…that when unions succeed, the middle class succeeds,” Perez said while speaking at the UFCW Local 400 headquarters. “And I can tell you this — when the union succeeds, Maryland succeeds.”