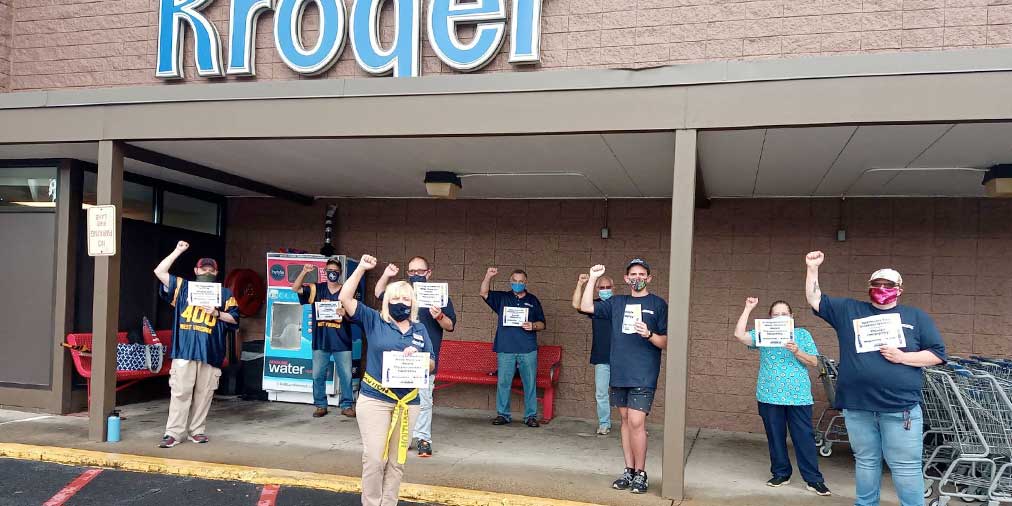 CHARLESTON, WV (October 7, 2020) – Despite record sales growth amid the ongoing COVID-19 pandemic, and with confirmed cases among store associates continuing to rise, grocery chain Kroger is proposing to cut healthcare benefits for thousands of employees in West Virginia, Kentucky, Ohio and Tennessee.

“Essential workers at Kroger have risked their lives and the lives of their families to operate these stores during this pandemic, and they continue to do so,” said Mark Federici, President of UFCW Local 400, the union representing the workers. “While other businesses have shuttered as a result of this pandemic, Kroger is making more money than ever. But instead of sharing this success with the workers who have risked their lives to make it possible, Kroger is greedily threatening to slash their health care benefits.”

In addition to slashing healthcare benefits, and after eliminating so-called “hero pay” earlier this year, Kroger is also proposing to eliminate raises and seniority rights for the most experienced store workers.

“A few months ago, this company rightly saw fit to call these workers ‘heroes’, but now Kroger is proposing to eliminate pay raises and seniority rights for their most experienced employees. That’s no way to treat heroes,” said Federici. “Some of these associates have been with the company for more than 40 years. They didn’t sign up to be on first responders during a pandemic, but that’s exactly what they’ve become. They deserve to be rewarded, not punished, for their service.”

While other businesses have closed or shut down during the pandemic, Kroger is thriving. Same-store sales have risen dramatically and the company says they are expected to exceed 13% for the rest of the year. Last month, Kroger announced plans to spend $1 billion buying back their own shares.

“With such extreme success, Kroger should be considering improving benefits, not taking away healthcare for workers on the frontlines of a pandemic,” said Mark Federici. The union is advocating for better wages, healthcare and safe working conditions, including hazard pay for frontline associates continuing to work during the pandemic.