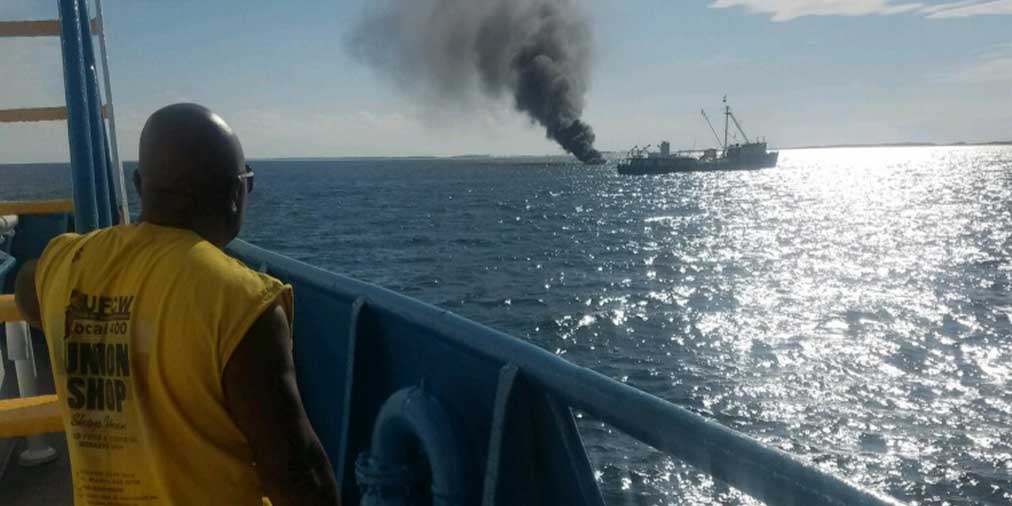 Members of Local 400 working on the Omega Protein fishing boat Smuggler’s Point recently rescued six people whose boat had caught fire in the Atlantic Ocean off the coast near the Maryland/Virginia line.

The boat and its crew were sailing back to Omega’s Reedville, Va. facility on August 20th after fishing for menhaden off the New Jersey coast when a distress call rang out. William Taylor, a longtime Local 400 member and Omega fisherman, was working as a cook on the Smuggler’s Point. “I had just cleaned up the galley and was about to take a shower when the engines suddenly slowed and the boat came around starboard,” he recalled. “I ran up to the deck, asked what was going on and was told a boat was on fire. I looked out and said, ‘Oh my goodness!’ It was the worst thing I’ve ever seen in nearly 40 years of fishing.”

“The boat was going up in smoke and we could see six people in the water,” William said. “They were wearing beach lifejackets, not the kind we have. We got as close as possible and pulled them up onto the boat. They were really shook up. We were just blessed to have come along in time. They were one and a half miles offshore and there are a lot of sharks all over the coast now.”

After their rescue, the Smuggler’s Point crew offered them a warm space in the pilothouse, water, and masks. “It took 45 minutes for the Coast Guard to get there,” William said. “If they had been in the water for that long, who knows what could have happened.”

After the authorities took the six people back to shore, the Smuggler’s Point resumed its journey back to Reedville.

“It was a terrible thing for their boat to catch on fire and they lost everything,” William said. “I’ve been thinking about it ever since. It could have been a bad thing. Hopefully, we did a good deed. We were just blessed to be there to help.”