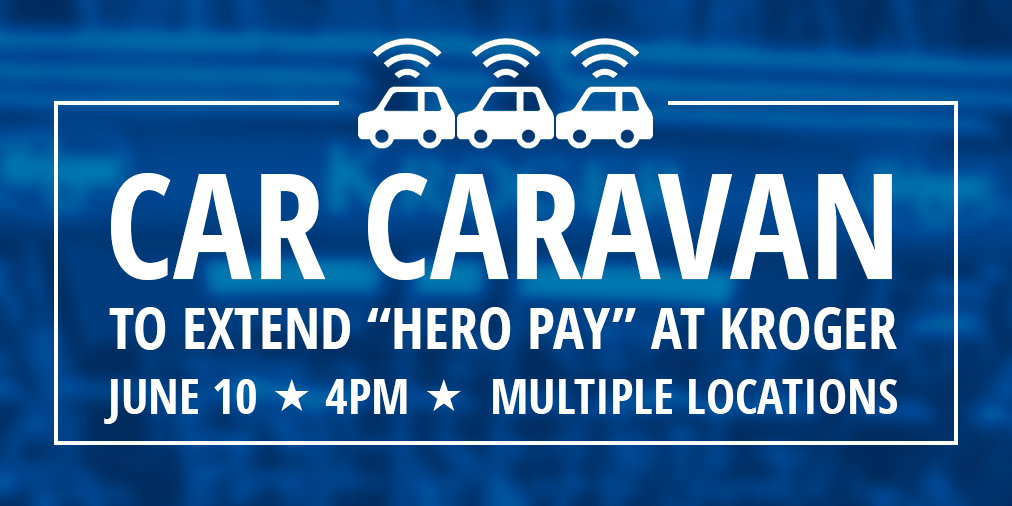 Kroger has ended hourly “hero pay” for their employees, even though they continue to face danger every day on the job.

On Wednesday, June 10th, join us for a car caravan protest to demand Kroger extend “hero pay” until this crisis is over!

We will be holding multiple caravans throughout the region beginning at 4:00 pm. Sign up below to join a caravan near you!

Kroger workers were heroes last month and they will be heroes next month. As other grocery chains have acknowledged by extending their premium pay programs, our members working on the frontlines continue to get sick and be quarantined, they deserve to be compensated for putting themselves and their families at risk every day they come to work on the frontlines.

We were overwhelmed by the response to our petition calling on Kroger to extend hero pay. Kroger workers, customers and community supporters all added their names. Last week, we delivered all 12,601 petition signatures to Kroger’s corporate office and the CEO, Rodney McMullen.

But we know a petition may not be enough to sway Kroger corporate executives to do the right thing. It’s time to hit the streets!

Join us at 4pm on Wednesday, June 10th at a car caravan protest near you! Be sure to make signs and decorate your car to get the message out!

Registration for this event is now closed.