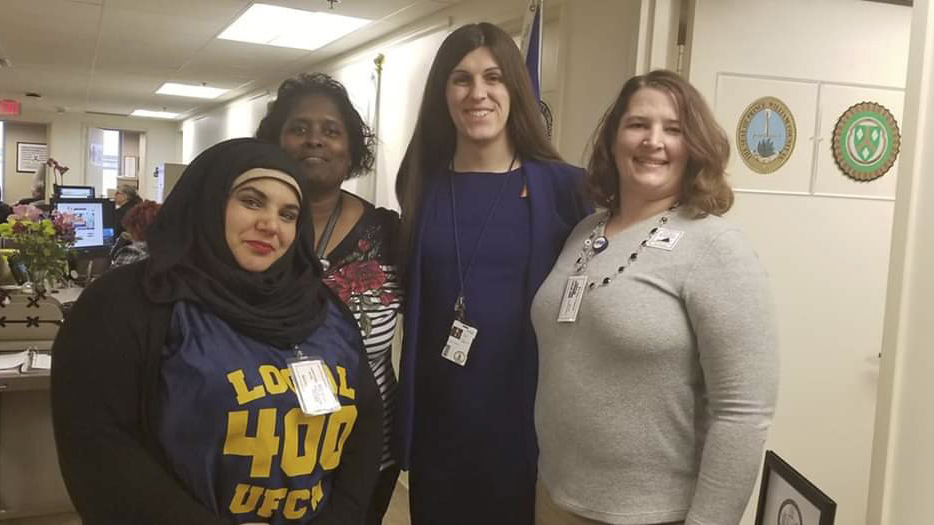 For Local 400 members Felicia Miller, Lisa Harris and Kristy Lee Vance, it was a lesson in the power of union activism. Over the course of several weeks, they met with a majority of Virginia’s state senators and delegates, urging them to pass desperately-needed legislation to raise the minimum wage. And on March 8th, as the 2020 session of the General Assembly ticked to a close, they saw the fruits of their labors, as the minimum wage bill passed both the House and Senate!

The bill, which is expected to be signed by Gov. Ralph Northam, was approved 21-18 margin in the Senate and 52-44 in the House. It will raise the minimum wage from the current $7.25/hour to:

This victory provides ample evidence that elections have consequences. When Republicans controlled the General Assembly, every minimum wage bill was killed. This year, with Democrats in control following their victory in the 2019 elections, it finally passed, along with other pro-worker legislation.

“This year, it was a real change to lobby considering what we’ve dealt with in the past,” said Kristy, who works at Kroger #402 in Blacksburg. “The atmosphere was different. Even the Republicans took the time to talk to us, something they never did before. And more people appeared to actually be interested in what we had to say, rather than being dismissed with a nod and a smile.”

Felicia, who works at Safeway #1801 in Warrenton, also noted the change in attitude, saying, “We got great responses from the Democrats. It was not so good with the Republicans, but at least they listened to us. And many of them did sign letters to Giant and Safeway, telling them to bargain a fair contract with us. Even they recognized that their constituents shop and work at these stores.

“Our lobbying helped a lot, because the senators and delegates would see the faces behind why we need a higher minimum wage,” Felicia said. “They would see Lisa, who has worked at Kroger for 13 years and still doesn’t make $15/hour, or Kristy, who just got above $15/hour after a longer time at Kroger.

That made a huge difference.

Lisa, who works at the Mechanicsville Kroger, testified before the Senate in support of the minimum wage bill. “Let me tell you what [making less than $15/hour] means to a 31-year-old woman,” she told members of the Senate Committee on Commerce and Labor. “It means barely being able to support myself. It means making tough decisions about whether to pay a bill or skip a meal. It means calling upon family members for help even as I’m attempting to be a fully franchised adult. It means not getting married and not having children and putting off a lot of things I expected I would have at my age.”
Her testimony made a huge impact.

All three Local 400 member-lobbyists were ecstatic when the legislation passed. “As soon as I heard, I tweeted and Facebooked it out immediately,” Kristy said. “I was overcome with joy, because finally, something is getting done for those struggling to make ends meet, living paycheck to paycheck, having to choose between going to the doctor and putting food on the table.

“This was a great step forward,” she added. “But even $15/hour is still not enough — we’ve got to keep fighting forward to make working Virginians stronger.”

“When the bill passed, I was like, YES!” Felicia said. “I love going down to the General Assembly to speak for my sisters and brothers in our union — and the fact they took it seriously. I love lobbying!”