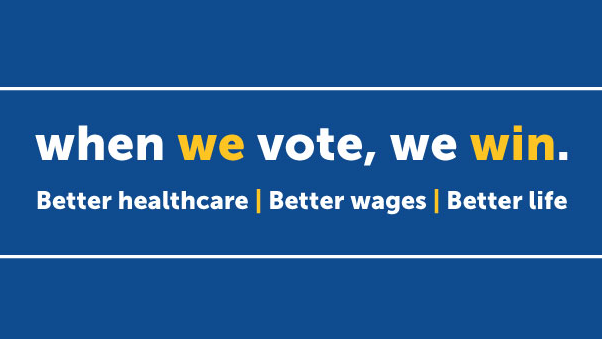 Virginia’s working families were the big winners of Virginia’s 2019 General Assembly elections as pro-worker forces captured the Senate and House of Delegates for the first time in more than 25 years. Local 400 members knocked on doors, made phone calls and played a central role in the grassroots campaign to elect our allies to the state legislature.

As a result, in January 2020, Democrats will control the House by a 55-45 margin and the Senate by a 21-19 margin. That opens new doors of opportunity to pass critical legislation blocked by the Republicans in recent years, most prominently, an urgently needed increase in the state minimum wage.

“Elections have consequences,” said Local 400 President Mark P. Federici, “and this year’s results must lead to important gains for our members and all of Virginia’s workers. I congratulate our members who volunteered to elect pro-worker candidates, and now it’s our job to make sure the winners follow through on their campaign promises. We must be a powerful force in Richmond holding everyone accountable for improving the lives of working families.”

The number one priority for the new General Assembly must be to improve working conditions across the Commonwealth. Virginia is the single worst state in America in which to work, according to Oxfam, and that starts with wage policies, where it also ranks last.

“It is simply unacceptable that someone living in Arlington or Alexandria is subject to a minimum wage little more than half what someone living across the Potomac River earns,” Federici said. “Virginia’s workers’ living standards must be raised to 21st century levels immediately.”

In addition, Virginia ranks 49th among all states on the right to organize and 48th in worker protections, according to Oxfam, a major reason being the state’s notorious “right to work” law. Repealing that law — and repealing the state’s ban on collective bargaining for public sector workers — could do even more than a higher minimum wage to increase Virginia workers’ living standards, because both moves would open the door to more union organizing.

Other priorities could include removing the work requirements for Medicaid recipients to increase the number of Virginians with health care coverage, enacting criminal justice reforms, making workplaces safer and the environment cleaner, and protecting women’s rights, civil rights and voting rights.

“What’s key is for our Virginia members to stay engaged, to join us at lobby days in Richmond, and to be in regular touch with their elected officials,” Federici said. “Winning the election was only the first part of the battle. Now it’s time for legislative action.”

(Note: Candidates marked with* flipped party control of their seat)