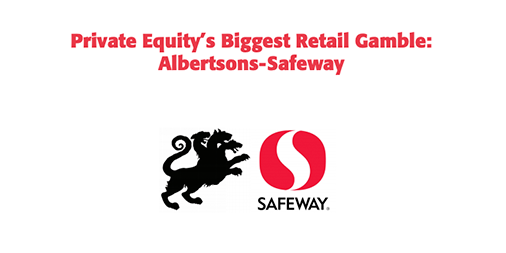 Cerberus Capital Management, the private equity firm that owns Albertsons-Safeway, is trying to make workers in the Washington, D.C. and Baltimore areas pay the price for their high, unsustainable debt load and corporate greed, according to a new report by the Private Equity Stakeholder Project and UFCW Local 400.

In its current bargaining with members of United Food & Commercial Workers (UFCW) Locals 400 and 27, Cerberus is refusing to honor Safeway’s previous commitment to secure pension benefits.

“As the report notes, what Cerberus is taking a page straight out of the private equity playbook,” said UFCW Local 400 President Mark P. Federici. “Borrow other people’s money to make an acquisition and strip the company you acquire of its assets to pay off your debt, while charging unconscionable, undeserved management fees. Paying the steepest price are the employees whose hard work makes the company profitable. But our members will not sacrifice their retirement security, so a handful of greedy billionaires can get even richer.”

The report notes that when Cerberus completed its $9.2 billion buyout of Safeway in 2015, it borrowed $7.6 billion to finance the transaction, amounting to 82.5 percent debt. This pushed Albertsons-Safeway’s total debt level to over $12 billion.

Upon taking control, Cerberus has squeezed Albertsons-Safeway on two fronts — to pay off its massive debt and to generate lavish management fees. Among the report’s findings:

“If Cerberus can find a way to pay dividends to its shareholders and make Albertsons-Safeway come up with exorbitant management fees, it surely possesses the resources to keep the company’s promises to current and future retirees,” Federici said. “It’s not a matter of money — it’s a matter of priorities, values and morals.”

“We’re the reason our customers come back to Safeway to shop,” said Michelle Lee, a 32-year veteran of Safeway who works at store #1283 in Alexandria, Va. “We’re making Cerberus their profits. The workers who stick around and help this company become a multi-billion dollar company need to be taken care of when we retire. The CEO gets a pension and so should we.”

“It’s an absolute travesty what’s happening with these private equity guys,” said Matt Milzman, who has worked at Safeway #4832 in Washington, D.C., for two-and-a-half years. “Institutions that take these stores that are cornerstones of their communities and strip them and take them apart so they can make $1.7 billion instead of $1.3 billion — how on Earth is this legal?”

“I’m 57. I can’t afford to retire now, because I have a son in college and I’m a single mom,” said Indiara Smith, who works at Safeway #1920. “Had I known that our pension would be taken away, I never would have invested 36 years of my life in this company. We work to get a pension. Are you telling me all these years were in vain?”

The role of private equity in undermining the living standards and destroying the financial security of workers all across the country has come under growing scrutiny from lawmakers, the media, and the public. What’s happening at Safeway is but one example among many.

Members of UFCW Local 400 who work at Safeway and other stores will hold a series of actions on Thursday, November 7th to protest the harm private equity is inflicting on American workers and to demand that management fulfill its pledge to protect their pension. These actions will culminate in a rally at a Safeway store in downtown DC. The rally will be held at 11:00 a.m. at 490 L Street NW, Washington, DC 20011.