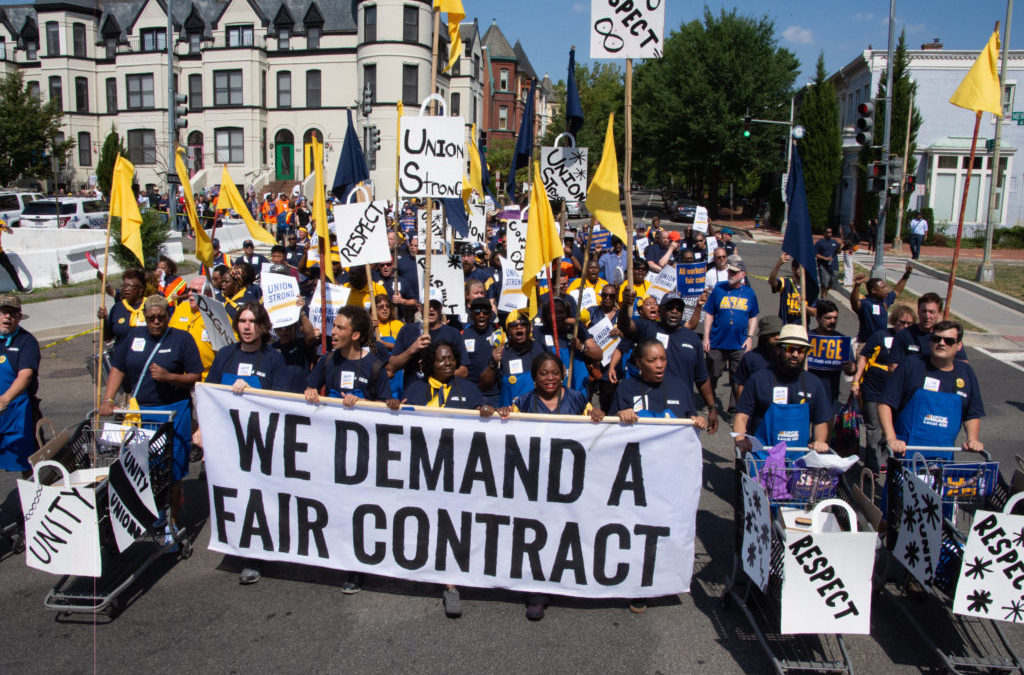 Send Message to Management: It’s Time to Share in the Rewards for our Hard Work

Hundreds of Local 400 members were joined by other union members, community activists and elected officials as they marched between Giant and Safeway stores in Washington, D.C. and rallied for fair contracts the day before the start of negotiations on a new union contract were to begin.

After a major strike in New England earlier this year against a sister company of Giant, and with a massive strike looming on the West Coast against Safeway’s corporate parent, Local 400 members are mobilizing, standing strong in solidarity, generating support from customers and allies, and preparing to do whatever it takes to get a fair contract.

“We’re letting Giant and Safeway know that now it’s time to share the success our members make possible,” Federici said. “We expect living wages so no one has to be on Food Stamps to feed their families. We expect better hours, scheduling predictability and more full-time jobs. We expect continued health and retirement security. We’re all here as one voice. One voice to call for fairness and decency. And when all of us stand together, we can’t lose!”

“We know our customers, we love our customers, they love us,” Lee said. “We know what type of coffee they want, we know how they want their meat sliced, we know whether they want ham or pork or pimento cheese or Swiss cheese… And our customers know that we care about them and that’s why they shop at Safeway, not because of some executive sitting in some big office. And those top executives making millions of dollars, they need to pass that money down to us!”

“My main concern for this contract is fair wages and reliable hours,” said Sonia Rivera of Giant #229 in Springfield, Va. “We want to give our customers 100 percent customer satisfaction. But we can’t because Giant is forcing our customers to use self scan.”

Matt Milzman of Safeway #4832 in Washington, D.C., brought his daughter Josephine to the rally and told of missing her first steps because he was bagging groceries. “I know sometimes that has to happen, but not for minimum wage,” he said. “The CEOs of Albertson’s and Safeway make millions off of our labor and off of our backs. And that’s not right. Not when I’ve got to miss my daughter’s precious moments. So let’s fight. Let’s fight for a fair contract.”

“I’ve worked at Giant for 34 years and my mother worked there for 40 years, so together we’ve got 74 years, said Mark Royal who works Giant #774 in Arlington, Va. and is a member of the Bargaining Committee. “We need to make sure our retirement package and pension will be there for us and those who come after us.”

“We know what we want, said Jane St. Louis, who works at Safeway #2794 in Damascus, Md., and serves on the Bargaining Committee and the Local 400 Executive Board. “Now, we hope Giant and Safeway know what we want. Because all of us are super strong and we have a lot of strength in our faith, we have a lot of strength in our work ethic and our ability, and they won’t know what hit them if they don’t come to the table and listen to what we have to say.”

The current collective bargaining agreements between Local 400 and Giant and Safeway expire on October 31st. Negotiations are expected to be contentious. This spring, 31,000 New England UFCW members went on strike against Stop & Shop—like Giant Food, a banner of Ahold Delhaize. After 11 days, Ahold Delhaize lost $110 million in profits and agreed to a fair contract. And this summer, multiple UFCW Local Unions in California and Oregon voted to authorize strikes against Albertsons, owner of Safeway.

“We’re hoping for the best, preparing for the worst, and mobilizing for all possibilities,” Federici said.