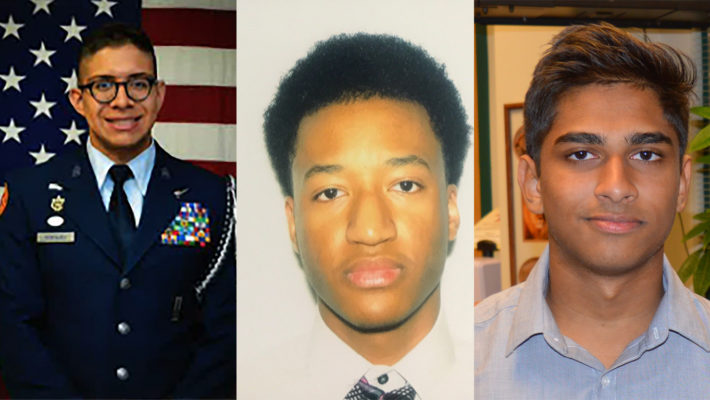 The FELRA & UFCW Health and Welfare Scholarship Fund provides $2,500 scholarships to help cover the cost of higher education for Local 400 members who work at Giant Food, Safeway or Shoppers Food, and their families. It is funded through the union’s collective bargaining agreements with these employers.

The 2019 FELRA Scholarship Winners are:

A 2019 graduate of Jefferson High School in Harper’s Ferry, Michael will attend the United States Naval Academy as midshipman in the class of 2023. He started his Plebe summer in June. In high school, Michael was Vice President of the National Honors Society, Cadet Commander for the Air Force Junior ROTC program, and a varsity member of the swim, track, and cross country teams. In 2018, he was awarded a scholarship to learn how to fly and was able to log over 50 hours of flying. Moreover, he successfully completed several solo flights. At the Naval Academy, Michael will major in Aerospace Engineering and hopes to become a member of the infantry skills team, marathon team, and mountaineering club. After graduating, Michael intends to serve in the United States Navy as a SEAL Officer, and hopes to become an astronaut upon completion of his military service. His father, Josh Henriquez, is a longtime Local 400 member who works for Safeway as a Produce Manager. “I was very excited to learn that I was receiving the scholarship,” Michael said. “The scholarship provides me with the opportunity to continue my education and prepare me for a career of service to our nation. I am very grateful for this scholarship and will make great use of it.”

James graduated from Charles Herbert Flowers High School in Springdale, Md., this spring. He was in the school’s Science and Technology Program and was a member of the National Society of Black Engineers. This fall, he will attend the University of Maryland, Baltimore County, where he plans to major in Engineering, His father, James Johnson, II, works at Shoppers. “I was happy to receive this scholarship because it helps my parents,” he said. “Since they’re going to help me pay for school, this makes it less of a burden on them.”

Dileepa is a graduate of Damascus High School, where he was among the top 25 in his class, a member of the Academy of Information Technology Program, and the recipient of the Distinguished Scholars Award and Presidential Award. He will be a freshman at the University of Maryland, College Park this fall. He intends to major in Computer Science, with an eye on becoming a software engineer. His father, Ravi Manage, works at Giant. “I was very happy,” to receive the scholarship, Dileepa said. “The money helps a lot and it’s a good amount too. I’m especially grateful because our family immigrated from Sri Lanka and I have an elder brother with special needs.”

Efforts to reach Tenzin, the child of Tashi Youdon who works at Giant, were unsuccessful.