Union Wins $31,855 in Back Pay for Kroger Meat Cutter in Appomattox 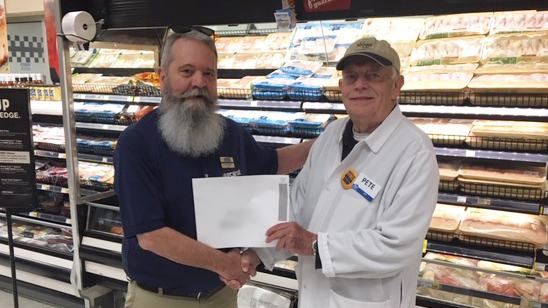 For Local 400 member and Kroger meat cutter Clarence “Pete” Dickerson, justice was a long time coming. But when it arrived, it was sweet—to the tune of $31,855.

Pete’s ordeal started more than eight years ago, when he transferred from his Kroger store in Richmond to Kroger #406 in Appomattox, Virginia. He needed to help care for his brother who had cancer and be closer to his family.

In Richmond, Pete worked as a meat cutter. But in order to transfer to Appomattox, he took a position as a part-time clerk, the only available opening at the time. Pete worked as a clerk in grocery and produce for a few weeks, but once the meat manager found out Pete was a fully trained meat cutter, he started scheduling Pete in the meat shop as a part-time meat cutter from that day forward. Sadly, his brother passed away, but Pete stayed in Appomattox, where he continues to work as a meat cutter today.

Unfortunately—and unbeknownst to him—the move from the grocery department to the meat department was mishandled by Kroger management. Pete was wrongly classified as a meat clerk, not a meat cutter.

Eventually, Pete became aware something was wrong. “My pension seemed awfully low,” he said. “So I started checking into it. They had me listed as a clerk according to paperwork. But I’m a meat cutter. I was hired as a meat cutter from the get-go.”

When Pete raised concerns, the store manager said, “We’ll look into it.” But months passed by with no action. But when his Local 400 representative, Phil Frisina, visited the store and learned of Pete’s issues, he filed a grievance.

“In our first meeting with HR, she told me I had said I came here as a clerk,” Pete recalled. “I told her I never said any such thing. And how would she know what I said? They were trying to blow me off.”

“It was a battle,” Frisina said. “Management claimed he should have known better. Come on—Pete’s 71½ years-old, an easy-going guy who didn’t want to rock the boat. I told Kroger he fulfilled his obligation to you by working as a meat-cutter. Your obligation is to pay him as a meat cutter.”

After more than five contentious months, Kroger finally did the right thing and agreed to a settlement reimbursing Pete for the pay he had rightfully earned as a meat cutter.

“I was thrilled to know that it has been done and handled the right way,” Pete said. “Anyone can make a mistake, but not to admit to the error is a problem.

“It wouldn’t have happened if I hadn’t had my union there to help me,” he added. “Everyone should join our union. That’s why Local 400 is here—to catch errors that would otherwise never be caught.”

“Local 400 repaired Pete’s past and fixed his future,” Frisina said. “I’m about to retire myself and this is the biggest back pay award I’ve ever won. It feels really good to have helped someone—especially a good person like Pete.”