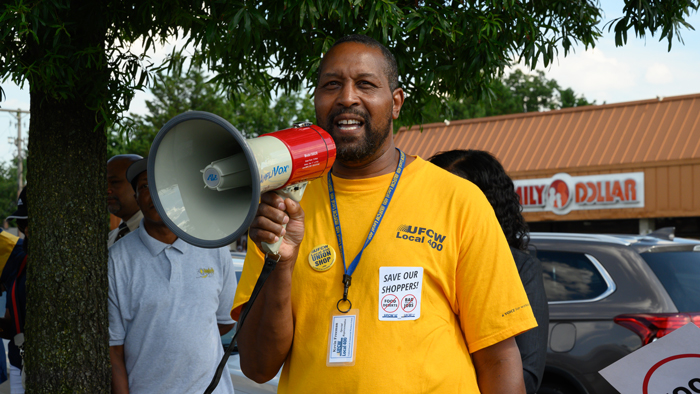 Hundreds of Shoppers Food & Pharmacy workers represented by UFCW Local 400, along with community leaders, other union activists and public officials, rallied in front of the chain’s Coral Hills, Md. store on June 26th to protest the potential closure of all stores in the area.

Speakers and participants called on the company to ensure these locations remain grocery stores with strong union jobs.

“I’ve worked at Shoppers for 11 years,” said Amber Stevens, a Local 400 member who works at Shoppers #2669 in Forestville, Md. “It’s my livelihood. It pays all of my bills. Not knowing if I’m going to be able to provide for my family makes me uneasy. When they decided to sell the stores, they should have informed their loyal employees. They should have informed us first. I hope that we can keep our stores and find union buyers — that would be a great outcome.”

“It’s been very stressful,” said Meeko Whitley, who works at Shoppers #2634 in Landover. “I have a family, two children and a grandchild, and it’s been very rough on a lot of people. I hope that I’m able to keep my job and stay employed. I hope UNFI reconsiders closing our stores.”

“We built this company,” Kevin Freeman, who works at Shoppers #2618. “For them to treat us like we’re nothing is wrong. We’re going to keep fighting, fighting and fighting some more. I hope UNFI sees and hears what’s going on and rethinks their decision.”

A host of public officials spoke out in support of the Shoppers workers.

“Prince George’s County has a problem already with food deserts, food swamps and not enough good paying jobs for our residents,” said County Councilwoman Jolene Ivey (D-5). “So this is a double-whammy. We need to protect people’s access to groceries and the right to good jobs. We need to make sure that we have quality grocery store here that’s a union shop. We need both.”

“I have a Shoppers in my district in Charles County,” said state Sen. Arthur Ellis (D-28). “It’s been there for years. I go there from time to time. I consider the people who work there my friends. I want them to keep their jobs, their health care and their retirement benefits. And we want people in our county to have access to fresh, good food, and we don’t want a food desert. Last year, Safeway in Charles County closed but we only found out after the fact. Here, we have an opportunity before an adverse action is taken to keep good jobs and fresh food in our communities.”

State Del. Dereck Davis (D-25) told the ralliers, “This is ridiculous. All we’re doing is asking them to let us know what’s going on. Well, we’re done asking. Now we’re demanding. We’re calling on the CEO to take care of their employees just like they take care of their shareholders.”

“You live here, you are our neighbors and constituents,” said state Del. Andrea Harrison (D-24). “We need to let UNFI know we mean business. Everyone should be able to take care of their families.”

“We are here to tell UNFI, it might be business to you, but it’s personal to us,” said Prince George’s County State’s Attorney Aisha Braveboy. “You are vital members of our community. I commit to you that I will do everything in my power to negotiate on your behalf.”

All Shoppers Food & Pharmacy stores in the DMV area are at risk of closing due to a decision made by corporate executives at Shoppers parent company, United Natural Foods Inc. (UNFI).

In 2018, UNFI purchased the parent company of Shoppers, Supervalu, and immediately announced their intention to divest all of their retail operations, including Shoppers, as quickly as possible. Since that time, the people who work at Shoppers and the communities they serve have been left in limbo, not knowing what is going to happen to the good, union jobs and quality food options that have served their neighborhoods for decades.

“To be clear, Shoppers is not bankrupt or going out of business,” said Mark Federici, president of UFCW Local 400, which represents the unionized workers. “Their parent company is simply determined to sell these stores, regardless of whether or not they are profitable. The loss of these grocery stores and the union jobs they provide would be devastating for these communities.”

Participants noted that 12 of Shoppers’ 36 stores are located in Prince George’s County. Nine are inside the Beltway, where five Safeways have closed since 2010, making them all the more important. Two stores are in Forestville and one in Oxon Hill, considered by county officials to be food deserts. Other stores are in Bladensburg, Bowie, Clinton, College Park, Coral Hills, Hyattsville, Landover and New Carrollton — all communities with residents who periodically struggle to find and afford healthy meals for their families and need access to affordable, healthy food.

For more than 40 years, Shoppers has provided good union jobs with fair wages and health and retirement benefits, as well as affordable, fresh food in many communities that would otherwise be food deserts.

“Our members have been left in the dark for far too long,” explained Federici “After decades of faithfully serving the community, it is irresponsible to leave these hardworking men and women to wonder what the future will hold. We are calling on the company to ensure that these locations remain grocery stores with strong union jobs.”