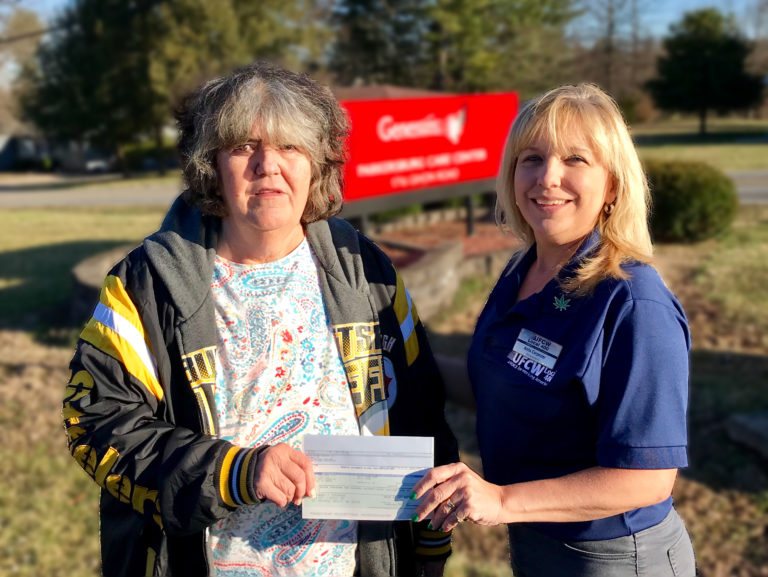 For 29 years, Mary Stephens had worked at the Parkersburg Care Center (now owned by Genesis Healthcare, Inc.) in Parkersburg, W.Va., the first 15 years in dietary and the last 14 years in laundry. By all accounts, she was a model employee and Local 400 member.

Two years ago, a subcontracting firm, Health Care Services Group (HCSG), was hired to run the laundry.  Up until this point, residents’ clothes, sheets, towels and other personal items had been washed with two workers operating the laundry. But HCSG—looking at the bottom line, rather than the actual workload—got the brilliant idea that laundry only required one worker. This person was expected to do the work of two people all by herself.

That’s the impossible position Mary Stephens found herself in. “They cut us down to one and it should have been two,” she said. “They haven’t yet proven it can be done.”

Mary worked as hard as she could but kept falling behind. She had been set up to fail. In October 2018, she was terminated. Adding insult to injury, management did not follow proper discipline procedures. Instead, they just kept a diary of what Mary didn’t get finished, because the workforce had been cut by 50 percent.  “I didn’t like the way they treated me,” she said. That was an understatement.  After she was let go, the members at the facility united together and documented what was taking place in the laundry.  They proved that the laundry job was not able to be done by one person in an eight-hour shift.

Mary and her union immediately filed a grievance. When the case was scheduled for arbitration, HCSG reached out to the Union one more time and we reached an agreement. Under the agreement, Mary received a check for over $12,000.00. “My union did what they could and they did their job,” she said.  Mary has decided not to return to work and start her retirement.

In the meantime, the subcontractor running the laundry operation has been bringing in extra people to help, suddenly realizing the job is too big for one person. Unfortunately, this “epiphany” was too late for Mary. But her union ensured that justice was served.