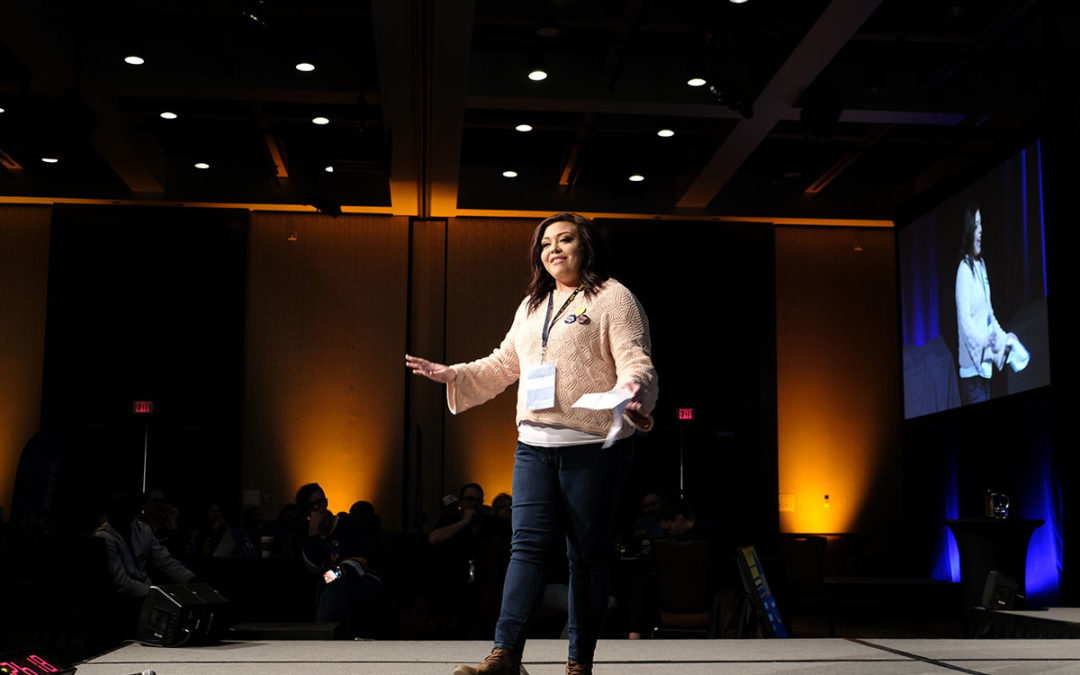 “There’s an activist in everybody. At some point, you’re going to get pissed off about something enough that you’ll want to make a change. It’s in each and every member. It just needs to be hit on.”

That’s the message Kroger shop steward Courtney Meadows brought to her sisters and brothers in Calgary, Alberta, where she was a featured speaker at UFCW Local 401’s 2019 Members’ Conference, held from March 14-17.

Courtney was invited after Local 401 members heard her speak at the 2018 Labor Notes Conference panel on “Contract Campaigns That Win.” They were so excited by her discussion about Local 400’s innovative tactics and member mobilization efforts around the 2017 Kroger West Virginia contract campaign, they told her they’d like to have her join them this year when they have their own bargaining with Safeway coming up.

“They wanted me to talk about member engagement and also about ‘right to work,’ because some politicians in Alberta want to try to pass similar legislation there,” Courtney said. “I told them about my family history and how I’m a third-generation union member. I explained how when I was first hired at Kroger, I was a model employee, but I got pissed off at how management mistreated my co-workers and me. And I was even more pissed when I learned that Kroger spent $2.6 billion to buy Harris Teeter, and how Kroger’s CEO got a $2 million raise while Harris Teeter employees need food stamps to feed their families. That’s what got me on the Contract Action Team.”

Courtney talked at length about how Local 400 members mobilized for the 2017 Kroger bargaining which resulted in the best contract for Kroger employees nationally that year, how they’ve fought back against “right to work” in West Virginia, and what it’s like to sign up Kroger members in “right to work” Virginia.

“It was one of the coolest experiences I’ve ever had,” Courtney said. “They had different workshops set up for member engagement on subjects like positive action, workers’ rights, empowering women and supporting LGBTQ members. I learned about the history of labor activism in Alberta, including all the strikes they’ve had. We even went door knocking on behalf of UFCW-backed candidates in their upcoming provincial elections.

“And the coolest part was this: They realize they need to get their younger members more engaged,” she said. “They’d been working on this conference for 18 months. They sent out applications. More than 1,000 Local 401 members applied for the 300 available seats. That was really impressive.”

Courtney was deeply moved by the response she received to her talk and her presence. “The whole time I was there, people shook my hand, said, ‘you’re such an inspiration’ or ‘you’re a bad ass.’ They would say they want to be like me and I told them, ‘you already are!’ Everyone’s got the activist in them—it’s just waiting to be tapped.”

With 32,000 members, UFCW Local 401 is nearly as big as Local 400, and due to the size of the province of Alberta, it covers an even larger geographic area. It is currently focused on upcoming bargaining with Safeway, though in Canada, it’s a different corporate entity than in the U.S., because in 2013, Canadian Safeway assets were was purchased by Sobeys, Inc.

Courtney, a resident of  Fairdale, W.Va., who works as lead e-commerce clerk at Kroger #805 in Beckley, has been a Local 400 member for eight years. Local 400 Representative Bertha McKiver accompanied her to the conference.