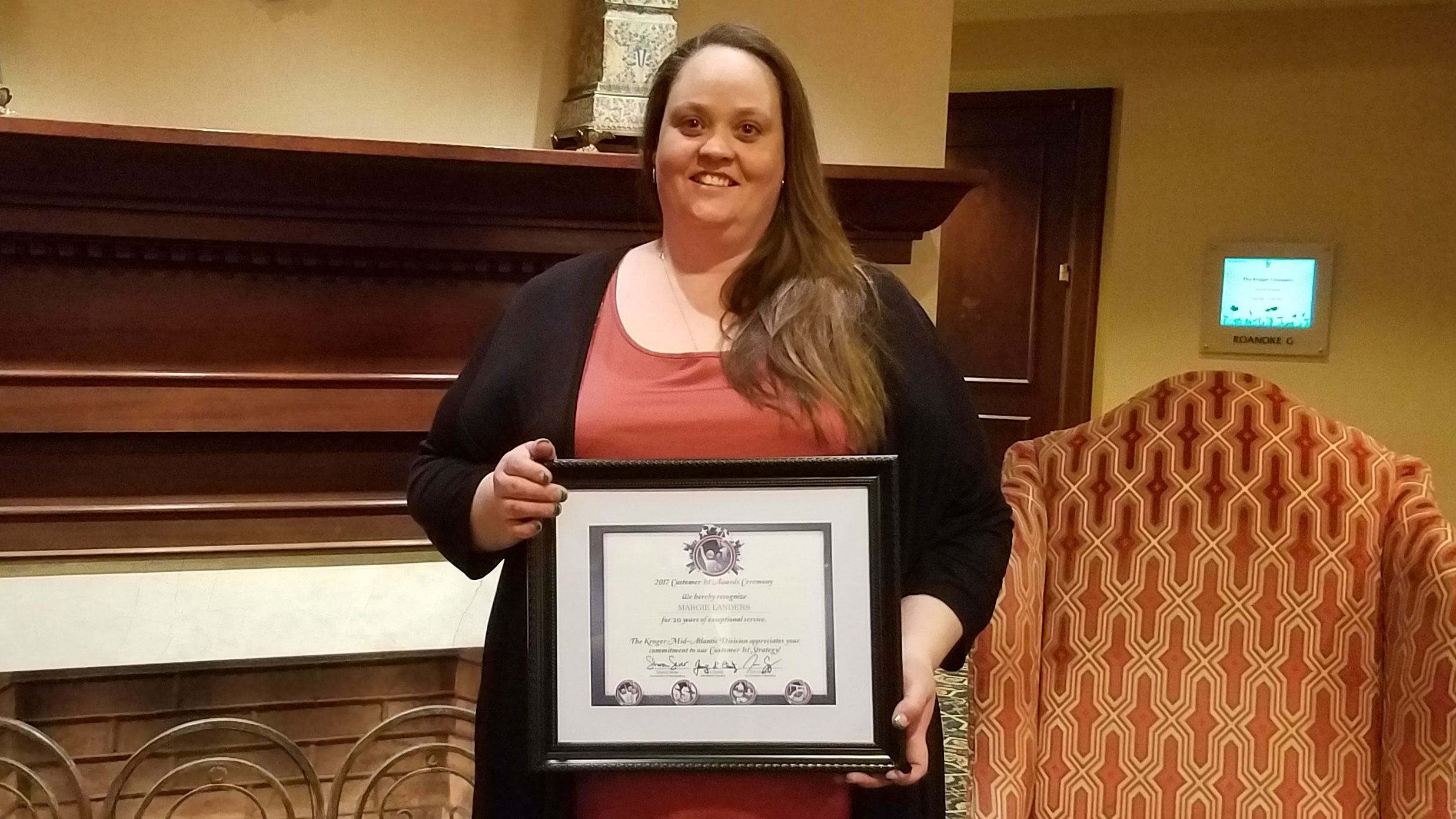 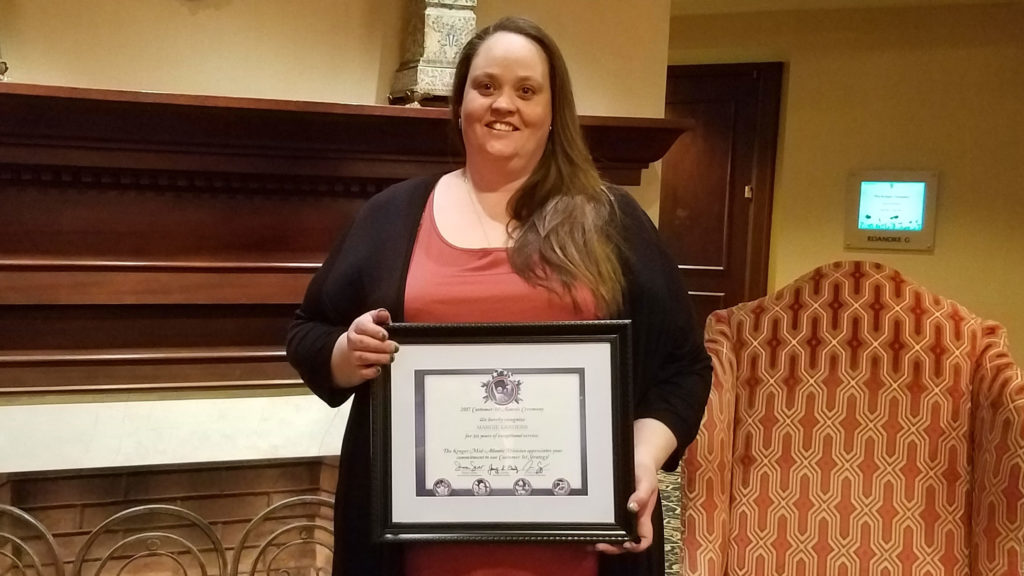 Margie Landers poses with her 20-year service award from Kroger.

To say that Margie Landers has never had it easy is an understatement.

Twenty-two years ago, she was living in a homeless shelter in Amadaville, W.Va. and she was determined to make it on her own. During the year she lived in the shelter, she took GED classes, and classes in accounting and bookkeeping. She also got a job as a cashier at Kroger #725 in St. Albans.

Without a car or driver’s license, Margie had to walk the nearly two miles from her shelter to Kroger every working day, but she was grateful to have a job and income.

“The woman who ran the shelter—we called her ‘Grammy’—she never gave up on me,” Margie recalled. “She even helped me get my driver’s license, which made it easier to get to work and keep my job. If not for her, I wouldn’t be where I am today.”

Not long after joining Kroger, Margie was able to get a place of her own. She also received her certificate in accounting and bookkeeping. And she stayed at Kroger #725, becoming full-time in 2007 and doing almost every job in the store outside of the Meat Department. “I’ve been backup dairy, head produce for a year, backup deli, you name it,” she said. Today, Margie is assistant front-end manager.

However, she recently had a huge scare. One day in August, the head front-end manager was off work, so Margie was to receive an upgrade in pay for the day. It was also the day that payroll was to be transmitted, and she wanted to make sure she was paid the proper amount, but an employee cannot adjust her own pay. So Margie got another employee’s ID and password and made the entry.

“This had been going on for years,” Margie said, “so I didn’t think anything of it. And my entry was correct—I wasn’t trying to get more than I was owed.”

Unfortunately, a co-manager witnessed the event. Rather than tell Margie she wasn’t allowed to use another employee’s ID and password, he said nothing, let her do it and then reported it to the manager. She was immediately suspended.

“When it happened, I filed a grievance,” Margie said. “I was freaking out. This is my first job and I’d never done anything wrong until now. It was insane. I could have lost everything—my home, my car, my dogs.

“But I also got statements from two employees that this had been happening for years and no one had ever done anything about it until now,” she said. “My shop steward, Kelly Snyder, was awesome, and so was Gary Southall, my representative. They know I’m a person of my word.”

When the grievance reached the second stage, Margie’s evidence—plus her moving testimony about how much her 22 years at Kroger meant to her, how far she had come, and how she would never do it again—won the day. After three weeks, she got her job back as assistant front end manager.

“Ever since I’ve been back, my attitude’s changed,” Margie said. “I’m so grateful to have my job and so grateful for what my union has done for me.”

Margie has always made a point of attending ratification meetings and staying informed about union affairs. She has also found her Local 400 sisters and brothers to be an endless source of support over her 22 years at Kroger, during which time she endured far more adversity.

“I lost my son in 2003 when I was here,” Margie said. “Two years later, my mom passed away. More recently, my fiancé passed away. Kelly has been with me all 22 years and she has been my rock, along with so many other co-workers. They’ve been amazing—tremendously supportive—every step of the way.