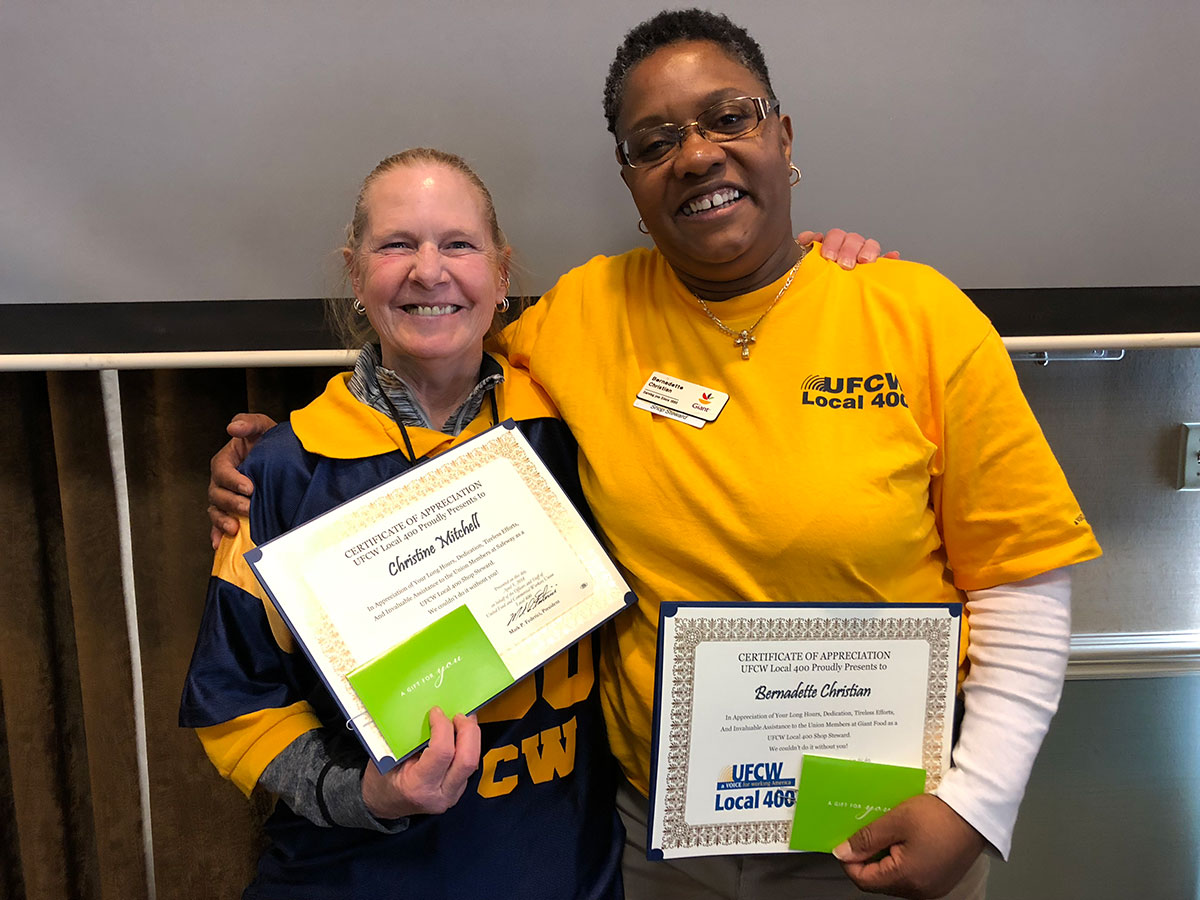 It was in the Winter of 2013. The weather was brutally cold and snow was on the ground. A young woman working in the salad bar at Giant #123 in Temple Hills, Md., had fallen on hard times and lost her home. Fortunately, her shop steward was Bernadette Hopkins-Christian.

“I walked up to her,” Bernadette said, “and asked, ‘Where are you going to stay tonight? It’s cold, you can’t stay outside.’ I told her she can stay at my home—we have an extra room in the basement with a bathroom. She lived with us for two and a half years. Now, she’s doing well. She has her own apartment with a friend and is back on her feet.”

Bernadette, who works as a cashier at Giant #123, wasn’t done with her extraordinary acts of generosity. When another co-worker found himself in a similar situation, she put him up in her Clinton, Md. home for a year.

Most recently, Bernadette opened her home to a third co-worker for a year and a half, before she was able to get housing and live independently.

“I take people in all the time,” Bernadette said. “We’ve lived in our house for 18 years and it’s only been just our family for one year. I have a very loving family and I commend them for putting up with my shenanigans. At one point, my son asked me to promise not to take in anyone else, and I said, ‘I can’t promise you that. If someone doesn’t have a place to go, I’m going to try to help them.’

“This is what my calling is,” she explained. “The family and friends we took in have their own places now and it feels good to know they’re doing well. It’s a blessing for them and for us. It’s just the right thing.”

Bernadette takes the same approach in her work as shop steward at Giant #123.

“They call me the Mama Bear in the building,” she said. “If someone’s hungry and doesn’t have enough food to eat, we’ll make sure someone buys them lunch. I take to heart being a steward. I care probably more than I should.

“We have a lot of new managers, so I spend a lot of time putting out fires,” Bernadette noted. “I give guidance and direction every day. I talk to members every day, especially new hires. We have to nurture them—we have to make sure they know what their rights are, what the policies are, what’s in the contract, because management won’t be telling them that.”

Bernadette has always been active in her union and was a member of the Contract Action Team during bargaining in 2016, organizing and participating in rallies and store actions. “It was exciting and very moving to be involved,” she said. “You don’t think people pay attention, but our customers sure did, because we are their families, too.”

In July, Bernadette traveled to Norfolk to speak at a rally for Kroger members whose store was threatened due to the company’s purchase of the Fresh Farm chain, which had its own store located directly across the street. “These companies just want to snuff people’s livelihood away,” she said. “Local 400 members have given up holidays, children’s functions and family functions to make these companies successful. For these companies to think they can wipe these people out and leave them with nothing, it is heart-wrenching to see. To move a store right across the street was such a slap in the face. All of us have to fight for all of our members.”

With 28 years working for Giant, Bernadette calls herself and her family, “Local 400 grown.” Her sister works at Giant #123 as a pharmacy technician. Her son, who is 21 and in college, worked at Giant from the time he was 16 and worked over the summer through his freshman year. And her husband, Terrence Christian, Sr., is grocery manager at Giant #2381 in Washington, D.C. Her daughter is the only exception.

“Whatever I’m able to do for my Local 400 sisters and brothers, I get back a thousand-fold,” Bernadette said. “My parents both passed away within three months of one another, and the support we got from our fellow members was just phenomenal. Thanks to them, we were able to say goodbye to my parents in the right way. There are so many good people at Giant and in our union, it’s wonderful.”