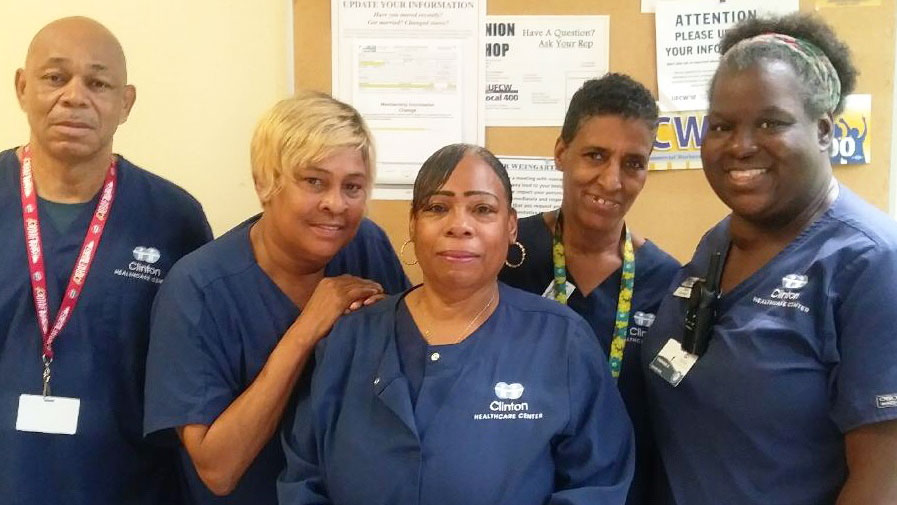 From left to right: James Smith, Joyce Jackson, Claudene Fletcher and Dora Young, along with shop steward Tawanna Gray, received $1,500 in back pay after filing a grievance at Clinton Healthcare Center.

Like most Local 400 members, the contract covering employees at the Clinton Healthcare Center in Clinton, Md., requires scheduling to be based on seniority. Workers with the most seniority are scheduled for 10 days in each two week period, and those with less tenure might find their hours more varied, based on staffing needs.

But shortly after Clinton was purchased by CommuniCare Health Services, a for-profit company that operates 50 health care and rehabilitation centers in five states, scheduling started to change. “The new management wasn’t looking at our contract or our needs, it was just doing whatever it wanted,” said Local 400 shop steward Tawanna Gray. “I told them, ‘we have seniority and you have to follow our collective bargaining agreement.’ But they didn’t listen.”

So Tawanna spoke with her Local 400 representative, Heather Thomas, who filed a grievance on behalf of Clinton employees against management.

At first, progress was slow. But then a new general manager was hired who recognized the company was in the wrong and who worked cooperatively with Local 400 members to put things right.

“It took a while, but we let him know how many hours each affected employee was denied, and eventually, they wrote back pay checks,” Tawanna said. “And from that day forward, they’ve always looked at seniority first in scheduling.”

The total amount of back pay was nearly $1,500 for the five members who had been wrongfully denied their hours — Claudene Fletcher, Joyce Jackson, Rose Proctor, James Smith and Dora Young.

“I didn’t get any money back myself, but I was so happy for everyone who did,” Tawanna said. “The people who deserved it got it. And they were very, very grateful.

“I think it’s always a plus when the company and union agree together,” she added. “An even greater plus is when you have a GM from the company who says, ‘I see a mistake, I’ll take care of it, and it won’t happen again.’ It was a real morale booster, especially for me because I didn’t feel I had to do it all by myself. We had our union to back us up.”