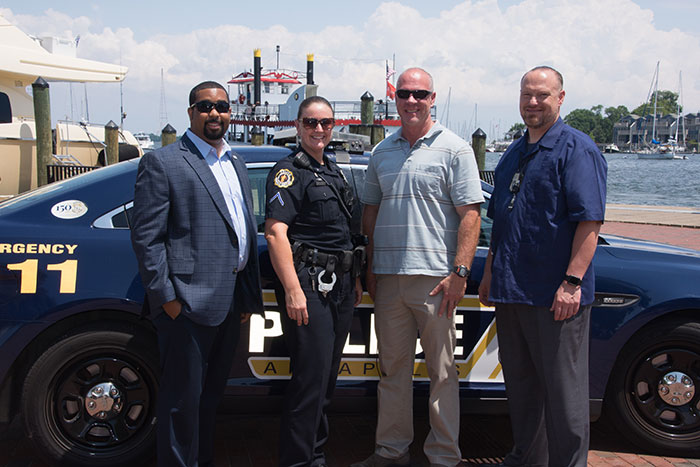 Annapolis Police Officers represented by Local 400 recently ratified a strong new contract that addressed their top priorities and improved the recruitment of qualified candidates by enabling all officers to receive take-home vehicles and reducing the time needed to receive full pensions from 25 to 20 years.

The negotiations took an unusually long time because a new mayor was elected and the city manager and finance director both resigned in the middle of contract negotiations. But the officers stayed strong and won on all the key issues before them.

“I’ve been in past negotiations where it feels like ‘us versus them,’” said Corporal Hil O’Herlihy, chief steward and a member of the Bargaining Committee. “But here, at the end of the day, we got together and worked out a deal that was beneficial to everybody. I was very happy. Everyone on both sides stepped up and did their jobs. This sets the Police Department up well for the future, and that will benefit the citizens of Annapolis.”

What was critical to the process was member solidarity. The primary goals benefited younger officers, because senior officers already had take-home vehicles and 20-year pensions. “Everyone understood that the younger officers were just looking for what the older officers already have,” Corporal O’Herlihy said. “People recognized that this is what matters for the agency going forward. It gives us a chance to get better qualified candidates, and all officers benefit when we’re able to recruit good people.”

Key provisions in the contract include:

In addition to their solidarity and perseverance, the members benefited from the fact that competition is fierce to hire qualified police officers. Local 400 members serving on the Annapolis Police Force persuaded city management that the take-home cars and improved pension benefits were essential to the Department’s ability to be fully staffed with the best possible officers in the future.

When the horrific mass shooting took place at the Annapolis Capital-Gazette on June 28th, Local 400 members serving as Annapolis police officers were the first to respond.

Even though the newspaper’s offices are outside the city borders in Anne Arundel County, Annapolis police officers were near the scene and arrived first. Not knowing what they would find, they charged into an active shooter situation, found and subdued the shooter, and worked to help the victims until emergency medical personnel arrived.

“My fellow officers went right in to the scene with no hesitation,” said said Corporal Hil O’Herlihy, Local 400 chief steward. “They ran towards the shooter and eventually placed him under arrest. They followed their training and their performance under the worst of circumstances couldn’t have been more impressive.

“Needless to say, it was incredibly traumatic to arrive in a room where people are screaming, bleeding and horribly injured,” Corporal O’Herlihy said. “Fortunately, the Department provides peer-to-peer support and other assistance to help them cope and heal. I was off-duty that day, but all of us know this is part of our commitment to service, and we’re all here to support one another—and support our community.”

Five Capital-Gazette journalists tragically lost their lives that day. But had it not been for the courage of Local 400’s Annapolis police officers, the outcome could have been even worse. They deserve our thanks and our admiration.