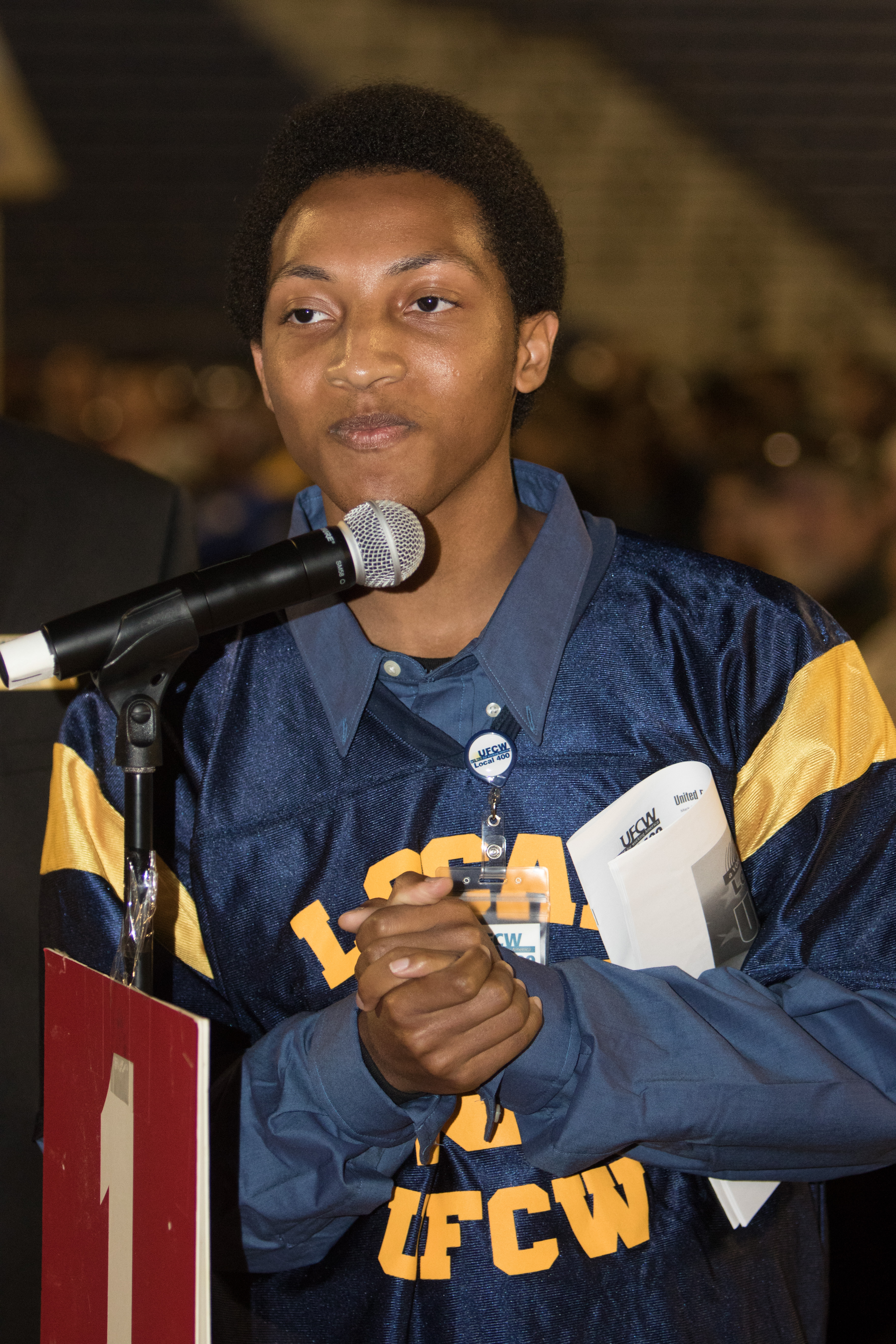 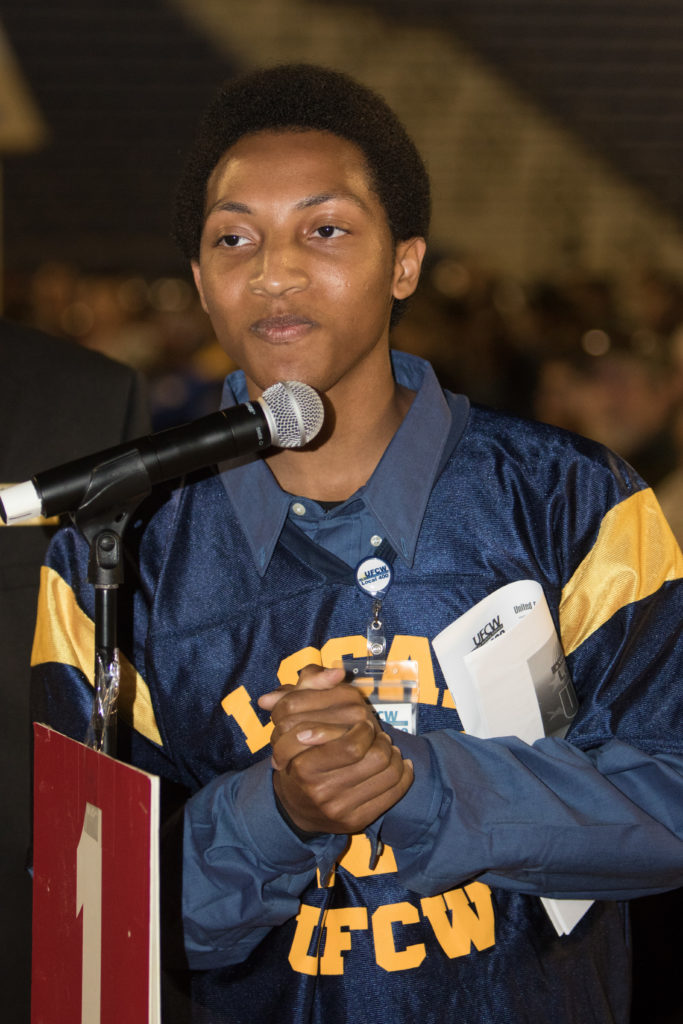 Darius Smith, who served on the union bargaining committee, addresses the crowd at a Giant Food mass meeting in Washington, DC.

Two years ago, Darius Smith, a courtesy clerk at Giant #347 in Kettering, Md., was looking for a new job. He was feeling underappreciated, and he often found himself doing tasks that were not in his job description. He thought maybe he had simply gone as far as he could with Giant Food.

But when he talked to his union representative, Heather Thomas, about job opportunities at the union, she had another idea. She told him about the collective bargaining process and asked him to join the bargaining committee, and Darius agreed. He realized that perhaps his work at Giant was not done yet.

Darius had never participated in a union committee before, and he admits, “all I knew [about unions] was paying union dues until I talked to my representative.” He describes being a member of the 2016 Giant bargaining committee and attending listening sessions as “eye opening for me, because it was like, ‘Wow! Everyone is going through the same thing.’”

About a year ago, he started working as a caterer at the World Bank. Although his first impression was of a “family oriented” company, it wasn’t long before, “I started to notice issues [with how they treated us], and we had to deal with them pretty much on our own,” he says. “I don’t know if I was nervous at first but when I saw problems arising I was like, ‘Yeah, we need a union.’”

In April, Darius attended the bi-annual Labor Notes Conference in Chicago with other Local 400 members. He expressed his frustrations about his new job to UFCW Local 400 Mobilization Director Alan Hanson. Darius told Alan about how he and his co-workers were being asked to take on larger tasks than they could handle; how some of his co-workers, many of whom are immigrants, felt that their employer was guilty of discrimination; and how, in January, the World Bank had started cutting hours of both full-time and on-call employees without warning or explanation.

“The World Bank is about ending poverty all over the world but if you look at how they treat us it’s completely hypocritical,” Smith says.

Darius was one of the few World Bank catering employees who had experience with a union, and he didn’t hesitate to take the lead in helping his co-workers get organized, although he says they didn’t need much prodding. In fact, he describes going to talk to a co-worker who Darius had heard might be hesitant about joining a union. By the time Darius got a chance to talk to him, he was already wearing a union button. “I guess other people had talked to him already,” he says. “I think he just didn’t really know about it [at first] but by the day of the election he was really ready to go.”

It seems this was true of most of his co-workers, 89% of whom voted to join the union in June.

But Darius knows from his experiences with Giant that the fight is far from over. “I really look forward to bargaining with the company, having everyone come together to formulate a better contract,” he says.

Along with experience and knowledge of the bargaining process, Darius’ contributes a great amount of spirit to his bargaining unit. “At Giant we had a lot of faith, and I think I can bring that, helping people keep faith, keep strong, keep motivated,” he says.

His experience as an assistant pastor at Hope in Christ Ministry helps him do this. It also helps him connect with his co-workers at the World Bank, one of whom is a priest and many of whom he believes to be similarly motivated by faith.

Darius hopes to be on the World Bank bargaining committee, and though formal listening sessions haven’t started yet, it seems that one of his greatest strengths is that he is always listening. He’s already gotten a lot of insight from co-workers about what their demands are, and he says that being part of Local 23 has given him an idea of what wages and contracts look like throughout the industry.

He also says that one of the most valuable things he has gotten from his involvement with the union is an education. “I’m not in college, I don’t have a college degree but I’m working with legislators and affecting laws, doing all these things people think you can’t do if you don’t go to college,” he says. “There’s more ways to succeed than college and I feel like I’m on that road.”

Now he is looking for ways to apply all that he has learned, and is learning, to his life beyond work. “Now that I have that union backing and that ministerial backing, it’s just a matter of finding that avenue, of how can I apply my skills to other social and community activism,” he says. “This is still very new for me but I know that the union can open doors for that.”