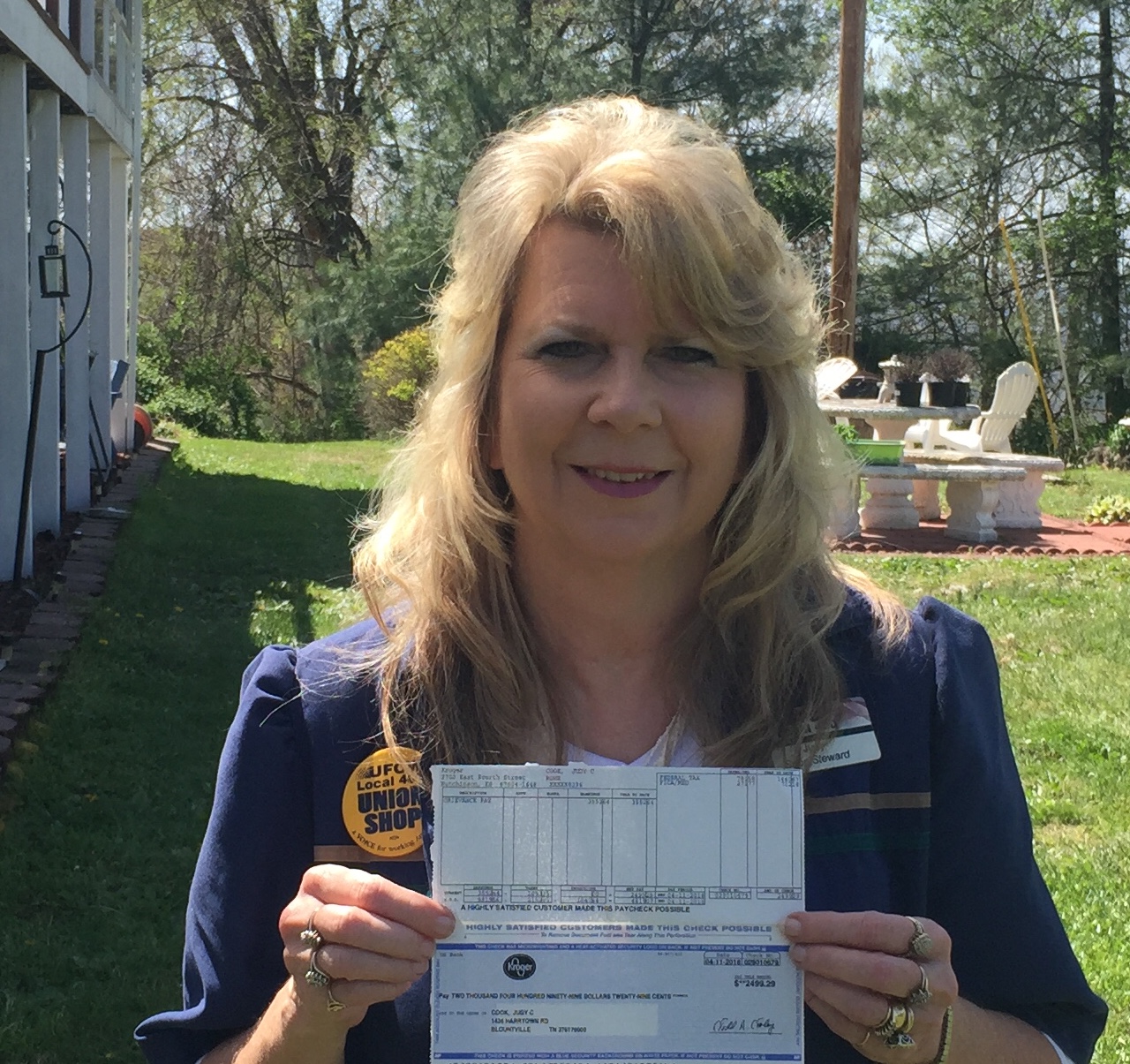 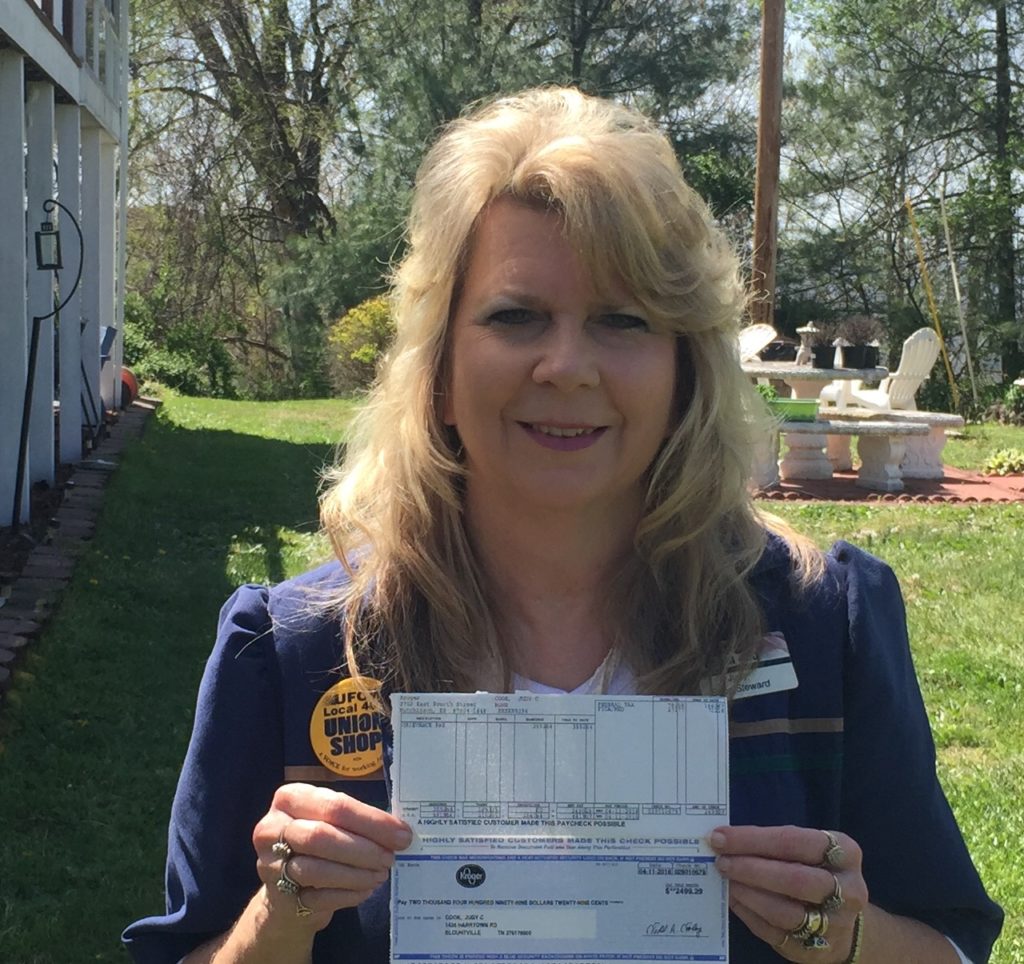 Judy Cook, a 39-year Kroger employee, was awarded $3,500 in back pay after being unjustly fired.

Over 39 hardworking years at Kroger, Judy Cook had a perfect performance record. She received glowing reviews, was never written up, was never late and hadn’t even taken a sick day for 25 years.

Then one day, all of a sudden, Judy was suspended without pay. Kroger charged her with holding back marked-down items for herself, rather than putting them on the shelves. But she had done no such thing.

“It totally destroyed me,” Judy said, “because I had devoted my life to Kroger. I could not believe they could do anything like this. It killed my soul. You put your heart and soul into a company and this is what they do? And what bothered me most of all was the idea that people who didn’t know me would think I was capable of doing what Kroger said I did. Kroger didn’t care that they destroyed me.”

A back door receiver and shop steward at Kroger #328 in Kingsport, Tenn., Judy was well respected by her coworkers.

“Everyone looks up to her,” said her representative, Mark Collins. “I never heard a negative and her name mentioned in the same sentence. She is a genuinely good-hearted, great person. Why Kroger put her in its crosshairs is beyond me. She’s never even had a speeding ticket. She practices what she preaches and she lives her life how you’re supposed to. It ripped my heart out. Kroger didn’t give two squats about what it did to her.”

If she was not a union member, at this point, Judy would have little recourse. She would probably just lose her job. But thanks to her union contract, Judy is protected from being unjustly fired without proper cause. Thanks to her contract grievance procedure, Judy could defend herself against the false accusations. And that’s just what she did.

Mark filed a grievance on Judy’s behalf, and went through three steps—first a grievance meeting at the store, then a meeting with the human resources coordinator, and finally a meeting with Kroger’s labor relations manager. Thanks to Judy and Mark’s persistence, Kroger ultimately agreed to allow Judy to go back to work and to receive full back pay of $3,500 for the five-and-a-half weeks she was suspended.

“I was ecstatic that I won my grievance,” Judy said. “It allowed me to hold my head up when I went back and not be ashamed. I had told Mark that under no circumstances would I go back to Kroger until my name was cleared. I wasn’t doing this for the back pay—I was doing it because I would not allow my name, my reputation, to be destroyed.”

“Kroger had zero evidence for their charges,” Mark said. “They went on a fishing expedition. The company grabbed at every straw they could, but they couldn’t get around the fact that she was 100 percent innocent. I’m just glad Kroger finally recognized they were in the wrong here.”

Judy was so distressed at her ordeal that after her return to work, she decided to retire. “It totally destroyed any feeling I had for this company,” she said. But before she left, Judy made it her mission to encourage as many people as she possibly could at her store to join the union. And she succeeded, signing up dozens of new members, including one person who had refused to join for 10 long years.

“I’m close to all the people at my store,” Judy said, “And they banded together to support me, even signing letters on my behalf. When I came back, I told every one of them who hadn’t yet joined Local 400, ‘If they could do this to me, they can do it to you. If you don’t have a union to protect you, you have no one and there’s nothing you can do.’ And they got it.”

Judy’s entire family has worked at Kroger and is 100 percent union. This includes her husband, who’s retired, her daughters, and two sons-in-law. In fact Judy’s daughter took over for Judy as Kroger #328 shop steward and signed up a new member on her very first day.

“I cannot say enough about our union,” Judy said. “I am so proud we’re a union family. Local 400 is the only protection Kroger associates have. Without our union, I shudder to think what things would be like. I would have been wrongly fired, and we’d be giving up our pay, our benefits, our work week, our vacation. Look how employers treat their workers when they don’t have unions.

“While this whole experience left a bitter taste in my mouth, nothing can top my gratitude for what Mark and Local 400 did for me, and I am so pleased I was able to give a little bit back before my retirement,” she added. “And I’m proud my daughter is now carrying the torch.”