How to Upgrade to a Full-Time Position at Giant, Safeway, & Shoppers 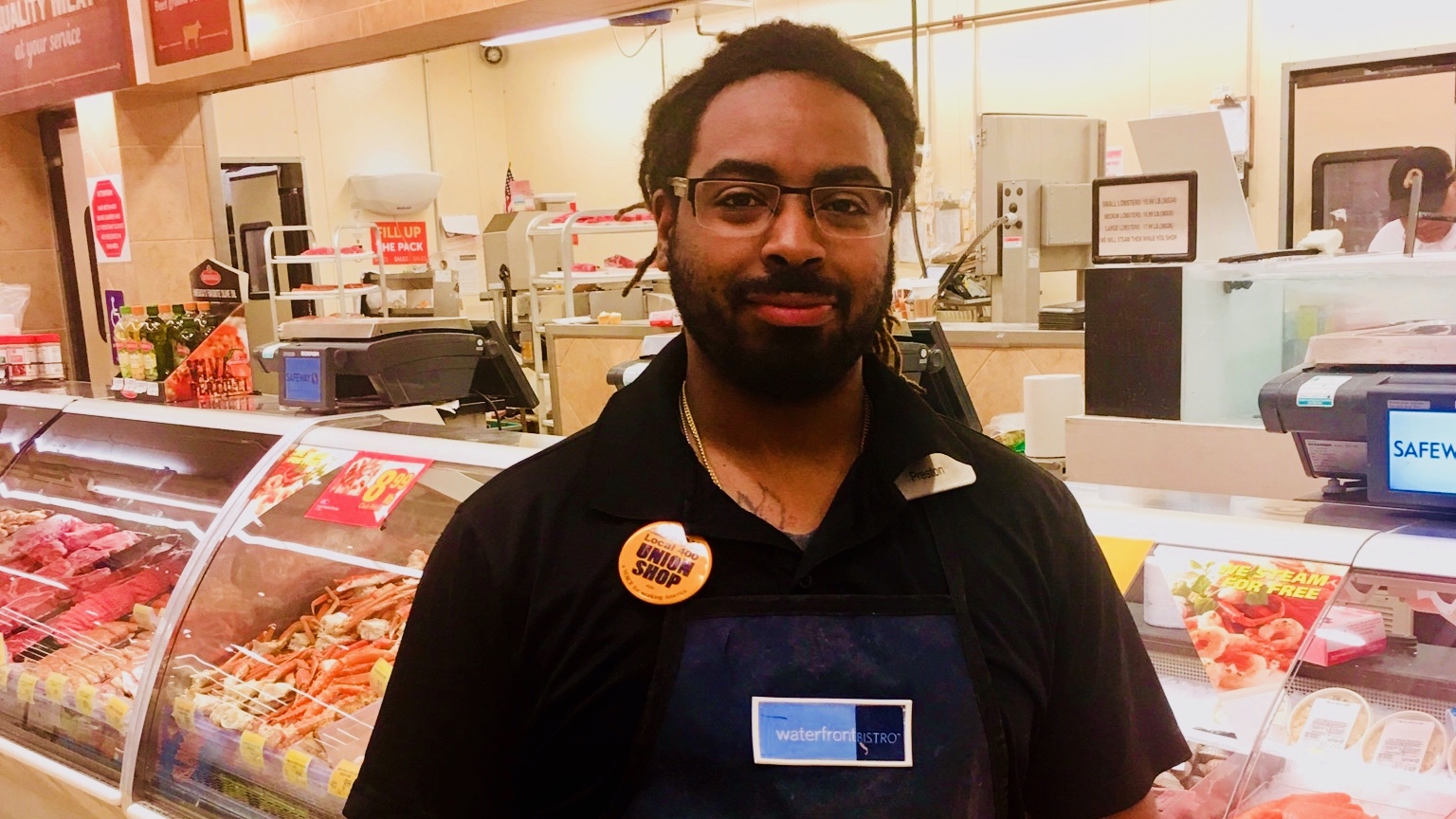 Preston Brown, now a service clerk in the Seafood Department at Safeway in Alexandria, Va., was recently upgraded to a full-time position after enforcing his union contract.

If you want to work full-time, you should be able to. But all too often in the grocery industry, hard-working men and women aren’t getting enough hours to get by. Thanks to our union contracts, our members have the opportunity to access full-time status.

In recent months, dozens of members have won upgrades to full-time status or better jobs by enforcing the terms of our contracts and winning grievances against our employers.

One is Preston Brown, now a service clerk in the Seafood Department at Safeway #3250 in Alexandria, Va. He was officially part-time, but over an eight week period last year, he worked 48 hours each week. After more than six weeks of working more than 40 hours/week, Safeway should have automatically created a new full-time position at the store and allowed part-time employees to bid for the position. But that didn’t happen.

“I was informed that I had the right to become full-time, so my shop steward and I pushed forward with a grievance,” Preston said. “But once management realized the situation, they cut my hours to around 32 a week. It took more than a month before they recognized that I had completed what I needed to do to be full-time.”

When Preston learned that he had won his grievance and was now a full-time employee, “I was very happy, very pleased to get that status,” he said.

Reginald Richardson faced a different set of circumstances than Preston but had a similar positive outcome. He was hired to serve as night captain at Safeway #2737 in Washington, D.C. But while doing the work of a night captain, Safeway didn’t code him as one, so he wasn’t being paid at the proper rate. “I fought for that position,” Reginald said. “It took a whole year.”

But Reginald won his grievance. “I was blessed,” he said. “I was happy. I got what I wanted after such a long time. I received back pay. I moved to full-time. And I got a supervisor’s position, as well. I am so very thankful for my union.”

Suma Gomes, Diti Rozario and Benny Mercado were working as service clerks in the Deli Department at Safeway #2781 in Wheaton, Md. Under the terms of their contract, 65 percent of the hours in their department must go to deli clerks and 35 percent to service clerks. But at this store, the ratio was reversed. So they filed grievances—and they won, too. All three were upgraded to deli clerks, with improved pay and benefits.

At Safeway #1716 in Bethesda, Md., an unusually complicated situation arose. Yolanda Lopez, a part-time deli clerk, transferred from Safeway #2848 because she was told she would receive a full-time position at her new store. Just prior to her transfer, part-time service clerk Claretine (Smitty) Smith had been working in the store’s Deli Department for 40 hours/week for far longer than six consecutive weeks, but didn’t realize this automatically entitled him to a full-time upgrade. So he submitted a bid for a full-time position during the open bid period.

However, Yolanda had more seniority than Smitty, so when she came to Safeway #1716, she worked 40 hours/week and Smitty’s hours were cut. After Yolanda had worked 40 hours for six consecutive weeks, she filed a grievance to be upgraded to full-time. But the store’s shop steward noted that because Smitty’s bid for full-time status pre-dated her arrival, he should be first in line for the upgrade. Importantly, Smitty had kept a copy of his bid sheet, so he had evidence store management could not refute.

Yolanda’s and Smitty’s Local 400 representative, Linnette Floyd, advocated a win-win solution by arguing that both members had legitimate claims to full-time status. Management insisted there was only one full-time position to be filled in the Deli Department. But after months of difficult negotiations, Safeway agreed to the workers’ demands and made both full-time deli clerks—a huge victory.

The stories of these members demonstrates how critical it is that you know your contract, observe when its terms are not being followed, and take action to enforce it. The results can pay off many times over.

How to Upgrade to a Full-Time Position

If you work part-time at Giant Food, Safeway, or Shoppers Food & Pharmacy, there are three ways you can be upgraded to a full-time employee:

If you would like a full-time position, talk to your shop steward or contact your union rep and they can help you through the process.