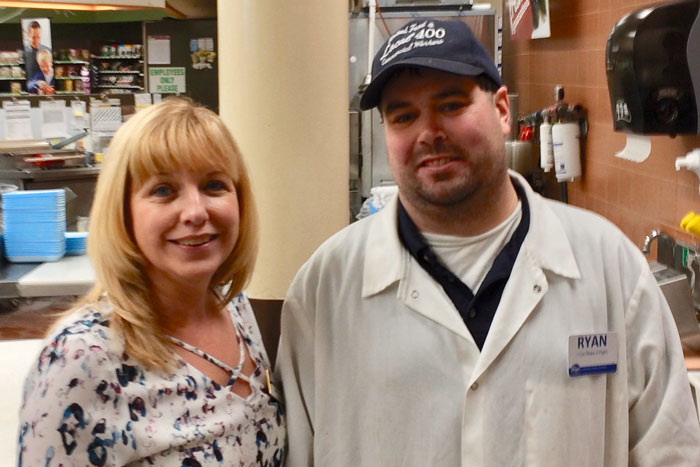 Ryan Kibble (right), a meatcutter at Kroger in Ripley, W.Va., was awarded $2,000 in back pay after the company was caught violating the seniority provisions of his union contract.

For Ryan Kibble, Chasity Moyers and more than a dozen other Kroger members in West Virginia and Ohio, justice has prevailed.

More than one year ago, they were denied promotions that rightfully should have been theirs due to the seniority provisions in their union contract.

“Seniority provisions are one of the most important protections in our union contracts,” explained Local 400 President Mark Federici. “By prioritizing the most senior employees for promotions and other benefits, seniority gives every worker the confidence of knowing that if you stick it out and pay your dues, then you will get ahead. It puts everyone on an even playing field and prevents managers from playing favorites and only promoting people they like.

“But, just like everything else in our contracts, the rules only protect us when we enforce them,” Federici added. “Ryan and Chasity did just that – and it paid off.”

Ryan Kibble was a full-time backup meat cutter at Kroger #708 in Ripley W.Va. In late 2016, he signed up for a backup customer service position at Kroger #799 in Belpre, Ohio, a move that would have cut his commute from his Parkersburg, W.Va. home from 45 minutes to just five minutes. However, the job was given to a part-time worker in violation of the contract. So Ryan filed a grievance.

“Kroger tried to pick and choose who they want,” Ryan said. “They claimed I had no skill for the position, but I had that job at a previous employer.”

After a lengthy back and forth, Ryan won his grievance in December and received $2,000 in back pay. While this victory gave him the right to take the backup customer service position, he had become a meat cutter at Kroger #799 in the midst of the grievance process and chose to stay in his current job.

“I was glad it was finally over,” he said. “And I was glad that Kroger finally had to pay for their mistake, which they need to do. You can’t set rules and then try to bend and break them whenever you want.”

Chasity Moyers had a similar experience. She was a full-time bakery clerk at Kroger #799 and signed up for a backup dairy position that opened up at her store. Someone else was given the job, and she soon realized she had more seniority than this person, so she also filed a grievance.

While her grievance was pending, the backup drug GM position came open at Kroger #799. “I signed up for that, too,” she said. “And I didn’t get that one either. So I had to file another grievance.”

A few months later, the backup drug GM position came open again and this time, she got it. But before she moved into that job, the head drug GM transferred and so Chasity leapfrogged to head drug GM.

Then, in December, she won her grievance and received nearly $1,200 in back pay.

“I was excited to win and receive the check,” she said. “To be honest, I had kind of forgotten about it because I was now in the job I wanted. But I’m really glad we enforced the contract.  Everybody has their own fair share in this company. This is a fair way to get a resolution out of something that didn’t work out, and I thank everybody who was involved.”

The Kroger West Virginia contract states that the company can award lead or department head jobs to individuals based on their fitness and ability, but when multiple candidates have similar qualifications, the person with the most seniority will receive the promotion. But in many cases, these guidelines were flouted, and the problem was not isolated to one store or one manager—it existed throughout the region. While most grievances have been resolved, some are still in process.

“Just as important as bargaining a contract is the need to enforce it,” said Local 400 President Mark P. Federici. “It’s very important not only for our representatives and shop stewards but for every member to know the contract’s terms and be vigilant about making sure they are followed. It’s our members’ activism that won justice in these cases—and sent a message to Kroger that we will hold the company accountable.”