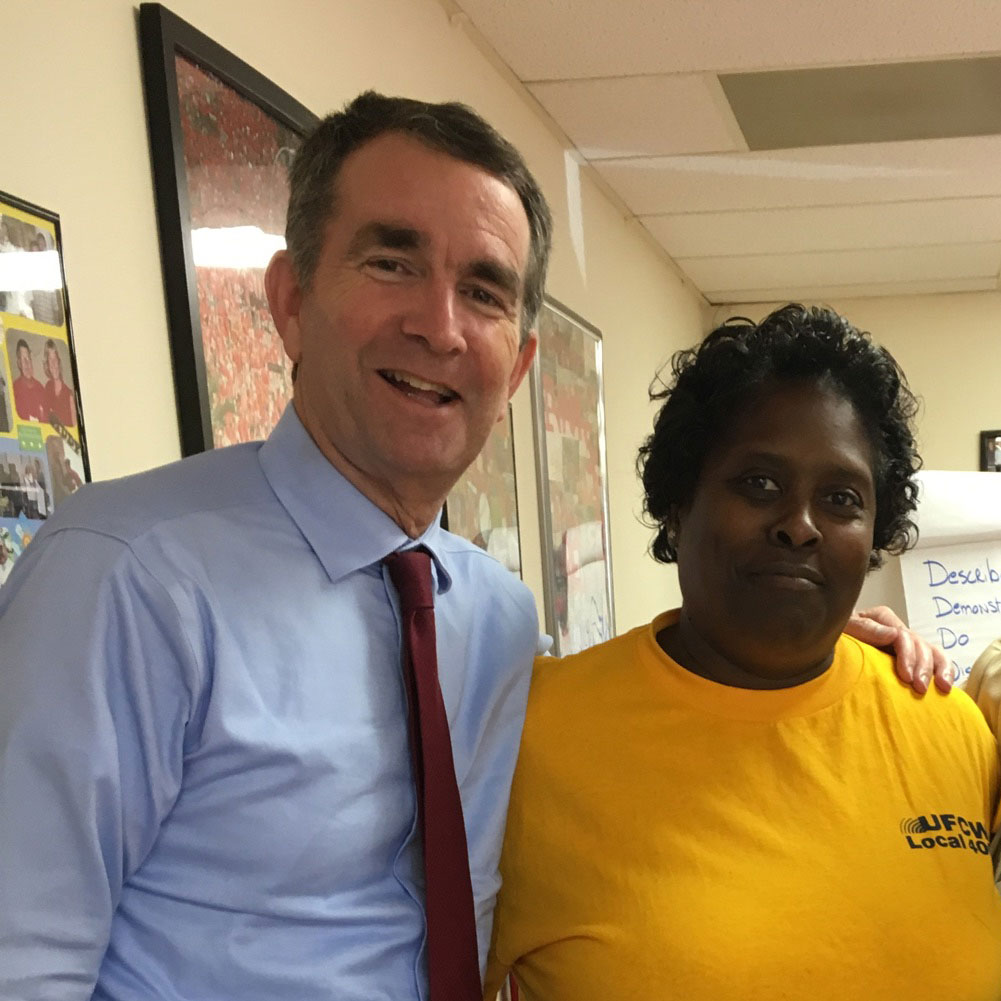 Felicia Miller has seen first-hand the power of Local 400 members to improve their lives by getting involved in political and legislative action.

A longtime shop steward who works as a deli clerk at Safeway #1801 in Warrenton, Va., Felicia is a political dynamo who works tirelessly to elect pro-worker candidates and to pressure elected officials to pass pro-worker policies in Richmond and Washington, D.C.

“As union members, we need a voice because it seems like we are being targeted and not in a good way,” Felicia said. “ So I feel we need to get out there and make a difference.”

“We went into plants like Tyson and Kroger stores to inform and activate members in the campaign,” Felicia said. “I’d ask them, ‘Don’t you want our union to be stronger so we’ll be more effective in getting things done like keeping our health care, getting higher wages, and improving job safety?’

“With all our volunteers, we went door-to-door, did phone banking, and held political events,” she explained. “We had a great turnout, and the results of the election were phenomenal. Everyone on our slate got elected.”

With the new governor and the now-closely divided General Assembly, Felicia has been centrally involved in Local 400’s and the Virginia AFL-CIO’s lobbying efforts, participating in the January 24th Take Action Virginia rally and the January 29th Labor Lobby Day.

“We’ve been fighting for a bill to crack down on wage theft, so employees are paid for all hours worked,” Felicia said. “We want to see a higher minimum wage, but the bill was killed in committee, so it will need to be introduced again. We’re pushing for a menhaden bill, so Local 400 members working at Omega Protein can keep fishing and keep their jobs. Medicaid expansion is also a priority, as is making sure teachers are getting paid fairly.”

In late January, Felicia went to the U.S. Capitol to lobby her senators, Mark Warner and Tim Kaine. “We mainly talked about protecting immigrants’ rights and keeping DACA, so dreamers can stay in the country they grew up in, as well as transgender rights,” she said.

In her work as a shop steward, Felicia said, “My focus is watching to make sure everybody is getting the right amount of hours and that managers uphold the contract’s seniority requirements. We’ve had to be vigilant about this. We’re also making sure they get the schedule posted on time, which is not always done, so part-timers can plan their lives.

“I also take every opportunity I can to talk to my newly hired colleagues about why they should join Local 400,” she said. “I talk with younger people about the benefits and the entertainment discounts, while I talk with older people about health care and our pension. And I remind everybody about all the great community work our union does, from LGBTQ outreach to the charities we’re involved with, as well as our annual picnics.”

Looking to the future, Felicia is aiming high. “I would love to get rid of the ‘right to work’ law,” she said. “I know that will be hard because it’s been in place for so long, but we did stop it from becoming part of the Virginia Constitution. It’s not right that people can benefit from our union without paying their fair share.”

Felicia lives in Spotsylvania County with her wife and has two adult daughters. With 33 years as a Local 400 member, she is grateful for what her union has done for her. “It has been an awesome ride because I have had the protection of health care, decent wages, and the opportunities to get out and speak with our members and do legislative work to make our union stronger,” she said.