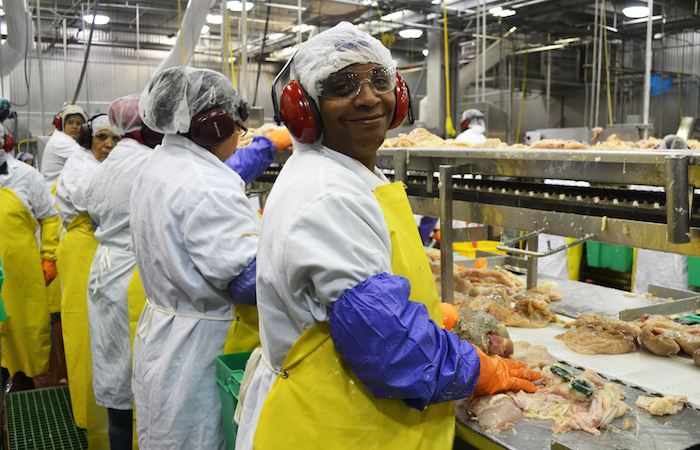 Oxfam estimates that each person eats 89 pounds of chicken a year – which means as a country, we’re eating close to 9 billion birds per year. It’s a major, multi-billion dollar industry that supplies us with chicken nuggets, wings, and the foundation for so many of our favorite, home-cooked meals.

It’s easy to cook, it’s affordable, and a mainstay in the meals American families share with one another.

But jobs inside poultry plants are some of the most dangerous and difficult in America. The National Chicken Council, which is the poultry industry’s main trade association and functions to represent its interests to Congress and other federal agencies, wants to do away with a key protection to keep workers safe on the job: line speeds.

Three Things You Should Know About Poultry Line Speeds

1.) By law, most poultry plants can run their processing lines at 140 birds per minute. That’s already insanely fast.

Federal law currently sets the line speed maximum at 140 birds per minute at most poultry facilities. To give you a sense of what that translates to in real life, that’s just a hair faster than the tempo for Michael Jackson’s “Beat It,” except where each beat is a chicken.

On the line itself, one employee can process more than 14,000 chickens each day. Depending on the job, each worker can process around 35-45 birds per minute – which rounds out to about 2,000 chickens per hour or nearly one chicken every two seconds.

Some plants are even allowed to operate at 175 BPM (for background on why some plants are allowed to be faster than others and for more examples of songs that match different line speeds, check out this great article from The New Food Economy). There are few things that we do each and every day that can even compare to that level of repetition.

While there’s currently a speed limit in poultry plants, the National Chicken Council wants to eliminate them entirely.

As line speeds increase, so does the risk of injury—including serious and bloody cuts and amputations.

But faster line speeds also mean less time for federal meat inspectors and quality control workers to do their jobs and ensure the chicken you’re eating is safe to consume.

Want a better idea how fast poultry lines could move if they eliminate line speed limits? Here’s what 200 BMP sounds like, which is how fast Germany already allows their plants to run (with negative side effects, as explained in #3):

3.) Faster line speed also means inspectors have less time to watch out for food safety issues. That should make anyone feel queasy.

If current line speeds are eliminated, federal inspectors who are tasked with spotting contaminated birds may be forced to examine more than two per second for abscesses, tumors, or other diseases.

The National Chicken Council argues that increased line speeds will help modernize the system, and keep up with international competitors.

But countries which allow faster line speeds have more issues with food safety. Germany allows line speeds up to 200 BPM and their poultry meat is found to have higher levels of Salmonella and Campylobacter contamination.

Retired USDA food safety inspector Phyllis McKelvey spoke out about the dangers of increasing line speed in an interview with NPR earlier this year:

“These machines will pull the viscera, which is the guts of the chicken. And a lot of times the guts hang on their prongs and those machines just get covered up in guts, which is slinging manure all over the product,” she says.

In the live hang section, McKelvey said equipment failures would also occur in the stun bath, where birds are shocked with electricity. That would send fully conscious birds to a machine that would sever their necks.

“If the line is going too fast you have a lot of birds that don’t get stunned,” she says. “So you’ve got some birds going into the scald vats, alive.”

The USDA describes the new inspection system as more science-based in that it requires that all poultry facilities perform their own microbiological testing along with two federal inspectors. This leaves one inspector to view the carcasses.

But with fewer inspectors, McKelvey argues, plants are relying on more chemicals like peracetic acid or food bleach to reduce the chance of food contamination.

“And if they don’t have a proper air system, these chemicals are causing people to sneeze and cough. And even at that rate it gets so bad we’d have to shut the line down,” McKelvey says.

Here’s how you can take action to keep poultry workers safe on the job and chicken safe on your plate: