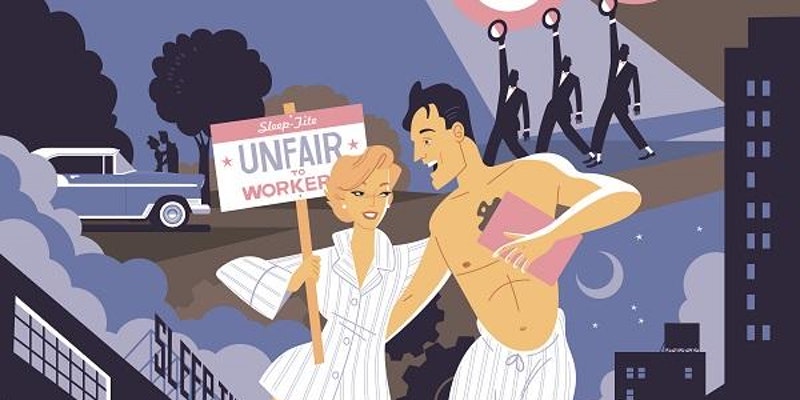 Update: Tickets are still available to the December 13 Labor Night at “The Pajama Game” at Arena Stage. Contact Isaac Evans directly at 202-600-4155 or email ievans@arenastage.org. They’re slightly more — $55 each — but you’ll still be in the labor group — now over 100! — and eligible to stay after the show for the Talk Back session with the cast.

The DC LaborFest is sponsoring a special Labor Night performance during the upcoming run of The Pajama Game at Arena Stage. The December 13 show will include a post-show “Talk Back” session with the cast.

The classic labor musical deals with labor troubles in a pajama factory, where workers’ demands for a seven-and-a-half cent raise are going unheeded, which resonates with the ongoing Fight for $15 and the federal wage freeze.

The Sleep-Tite Pajama Factory is a tiptop model of efficiency – so why are things getting so steamy? It could have something to do with how hard new superintendent Sid Sorokin has fallen for Babe Williams, the trouble-making head of the union grievance committee. Sparks really start to fly when a workers’ strike pits management against labor and ignites an outrageous battle of the sexes. Packed with seductive dance numbers like “Steam Heat” and “Hernando’s Hideaway,” the best way to ensure a good night’s rest during the hectic holiday season is to play The Pajama Game!