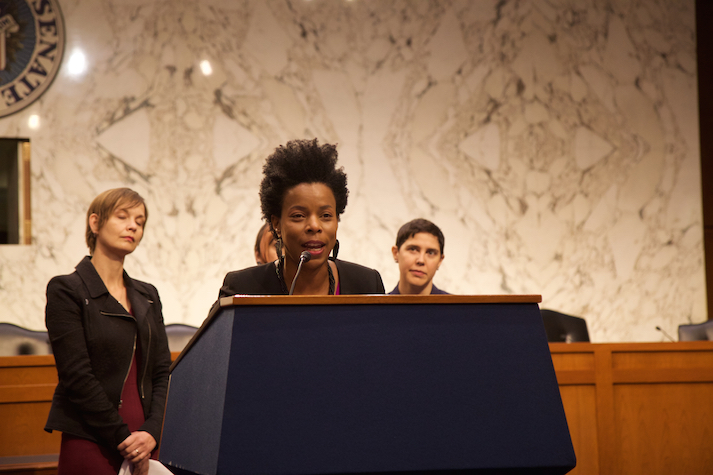 Kim Mitchell, a Local 400 member and Macy’s employee, speaks at a press conference announcing the reintroduction of the Schedules That Work Act.

At a press conference on Capitol Hill on Tuesday, Senator Elizabeth Warren from Massachusetts announced the reintroduction of the Schedules That Work Act, a bill that would allow workers to request greater stability in their work scheduling.

The Schedules That Work Act would provide workers modest safeguards and begin to curb the most abusive scheduling practices. The bill includes a presumption that workers who need a schedule change due to child care, school, a second job, or medical needs will receive that change unless there is a bona fide business reason not to. The legislation also provides retail workers with two weeks advanced notice of their schedules and guarantees minimum pay when they are sent home from work before completing their entire shift.

Warren was joined by Representative Mark Takano of California’s 41st District and Representative Rosa DeLauro of Connecticut’s 3rd District, as well as speakers from the Center for Popular Democracy, the National Women’s Law Center, and UFCW Local 400 member and Macy’s employee Kim Mitchell.

All of the speakers emphasized the toll that irregular and often insufficient scheduling can have on families. Several speakers also mentioned how this issue is compounded by an unreasonably low minimum wage.

Senator Warren described her particular connection to the issue, as the child of a woman who was able to support her family because of a minimum wage job that offered her a regularly scheduled forty hour work week.

Mitchell echoed much of Warren’s sentiment, recalling a time when retail was seen as a more economically viable lifelong career. As a member of Local 400 with a union contract at Macy’s, Mitchell receives her schedule a month in advance. But advance notice alone is not enough to offer workers the stability they need. All of the speakers expressed hope that this bill would help workers keep the jobs they value, and in turn be valued appropriately for the work they provide.

Marc Perrone, President of the United Food and Commercial Workers International Union, issued the following statement regarding the reintroduction of the Schedules That Work Act.

“When a person’s work schedule varies widely from week to week, it brings chaos to both family life and family finances. The Schedules That Work Act is a common sense piece of legislation that will help hard-working men and women have more control over their lives. Smart, flexible, and reliable scheduling is the best way to ensure every family is able to build the better life they’ve earned and deserve.”

When asked about the possibility of some overlap between the Schedules that Work Act and a bill introduced by House Republicans that would allow employers to offer paid time off instead of overtime pay, Representative DeLauro expressed little hope for cooperation and was skeptical that the two bills had potential for common ground.

Updated with a statement from UFCW International President Marc Perrone