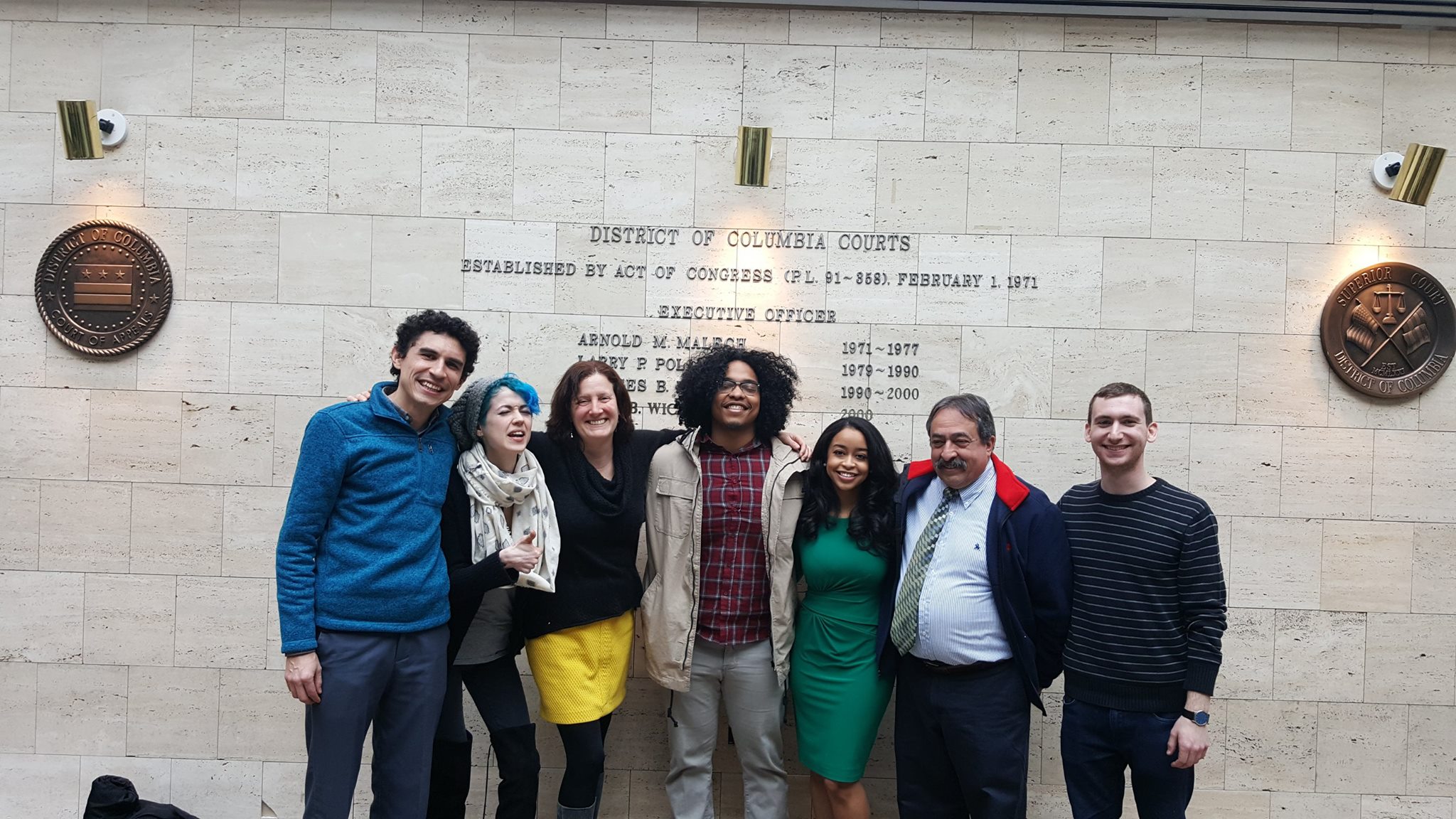 Local 400 organizer, Michael Sampson (center), poses for a photo with six other protesters after facing trial for disrupting the nomination hearing of Attorney General Jeff Sessions in January. (Photo courtesy of Kim Propeack).

For Local 400 Organizer Michael Sampson, it was “an opportunity to speak truth to power.”

Then-Senator Jefferson Beauregard Sessions III (R-Ala.) was testifying at a hearing on his nomination by President Donald Trump to serve as U.S. attorney general. But Sessions had a decades-long history of holding racist beliefs and undermining voting rights.

Michael Sampson chants “black lives matter!” as police escort him out of the hearing.

So in a courageous act of civil disobedience, Michael joined with activists from civil rights, immigrant rights and other organizations to attend the hearing and protest Sessions’ nomination.

“Sessions has a history of calling vital organizations like the American Civil Liberties Union and NAACP un-American,” Michael said. “He once called a black staffer ‘boy.’ That’s why he was rejected by the Senate for a federal judgeship in the 1980s.” In addition, Sessions worked as a prosecutor and senator to undermine voting rights laws, to support efforts to disenfranchise African American citizens, and to deport immigrants. And his record of support for anti-worker laws stands second to none.

Michael attended the hearing “to give voice to communities under attack, especially with the executive orders Trump has been signing,” he explained. “It’s important that we speak up for those who are marginalized by this administration and make clear people will resist.”

When Sessions spoke, Michael and other activists stood up and chanted, “Sessions is a racist!” He and four other protestors were then arrested by the Capitol Hill Police.

“I spent six to seven hours in jail,” he said. “I was sentenced to 32 hours of community service and banned from the Capitol grounds for four months. This was not a vacation day, but I would do it again in a heartbeat. The strength of the people I was arrested with was inspiring. We must stand up to racism, oppression, and attacks on working families.”

Michael, who organizes retail employees in Washington, DC, encourages Local 400 members and unorganized workers to take action. “We need to continue get involved with our union and speak out against the bosses working hand-in-hand with the Trump Administration,” he said. “Many of these CEOs are working with Trump to pass laws like national ‘right to work,’ which is a direct attack on Local 400 members. As attorney general, Sessions is the nation’s chief law enforcement officer and will play a role in implementing the anti-labor laws Trump will be pushing.

“Many people, both inside and outside the labor movement, are being awakened about how we need to come together, speak up and keep resisting,” Michael emphasized. “For the marginalized people we serve and those we want to serve in the future, we’ve all got to be out there making change happen.”