As 2016 comes to a close and we look forward to the year ahead, we want to take time to reflect on our successes over the year. We’ve welcomed hundreds of new members to our union family, successfully passed legislation to benefit hard-working families, and even saved hundreds of jobs threatened by a corporate merger overseas. We know we have our work cut out for us in 2017, but we will continue to meet every new challenge the same way: by sticking together as a union family.

UFCW Local 400 Condemns Passage of “Right to Work” in West Virginia
In a partisan vote, the West Virginia legislature voted to override Governor Tomblin’s veto of the “Workplace Freedom Act,” commonly known as “right to work.” Mark Federici, President of the United Food and Commercial Workers Local 400, issued the following statement:
“Every West Virginia State Legislator who supported passing this bill should be ashamed of themselves. The bottom line is ‘right to work’ will make it much more difficult for hardworking men and women to earn better wages, secure family-supporting benefits, or ensure proper safety in the workplace.” 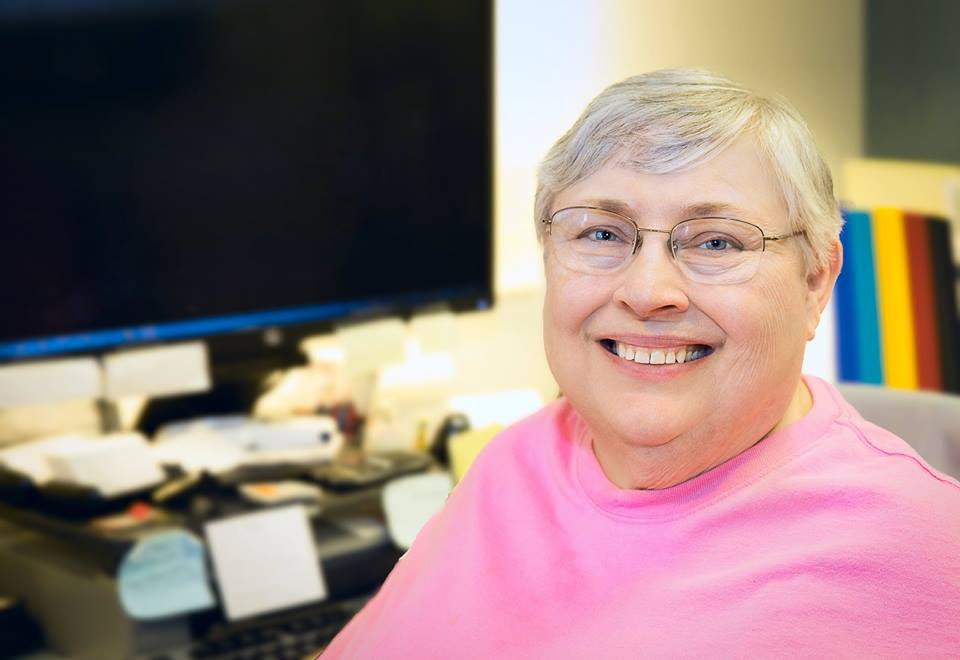 Delivery of Petition Signatures to Kroger on Behalf of Coworker Who Suffered Stroke Draws Local Media Attention
We delivered more than 330 signatures from employees to store managers at a Kroger Marketplace in Portsmouth, Virginia on behalf of Felecia Mayes, an 18-year employee with the company who suffered a stroke while commuting to work, lives only minutes away from the store. The petition called on the company to allow her to transfer to the store with all the benefits and protections of her union contract intact. 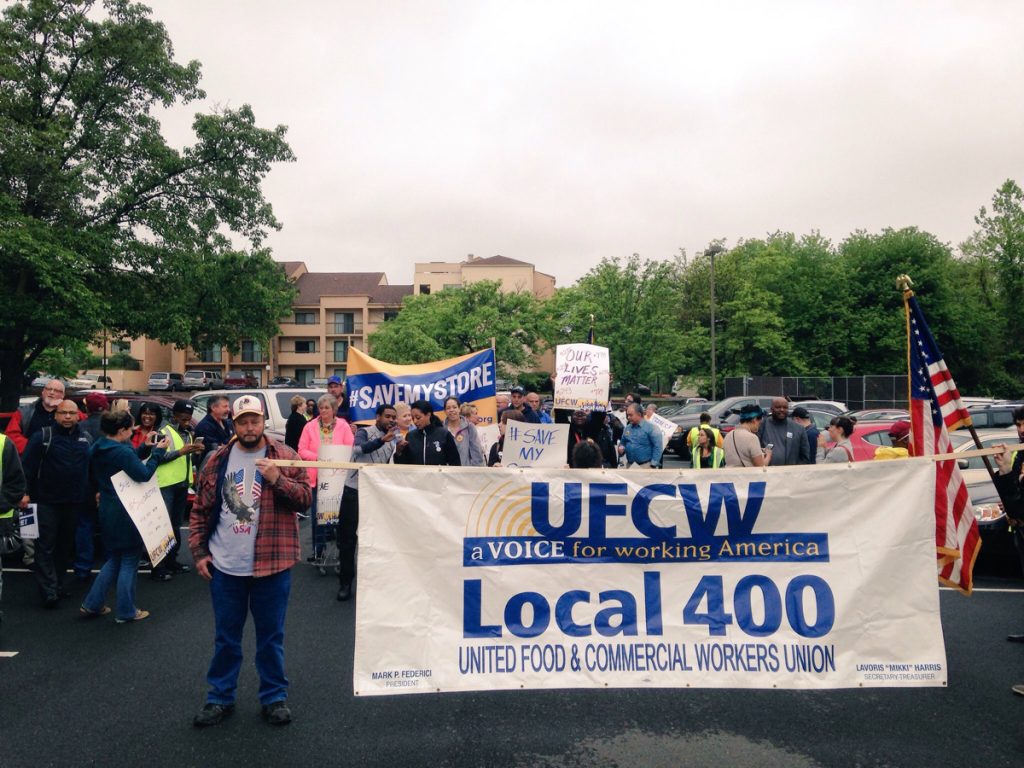 Following shareholder approval of the merger of Ahold and Delhaize, the parent companies of local grocery chains Giant Food, Food Lion, and Martin’s, employees at eight area stores were informed that their stores may be sold as a result of the merger. With the future of so many jobs at stake, nearly 100 Giant Food employees were joined by local elected officials and community leaders to launch the #savemystore campaign at a press conference in Fredericksburg, VA.

Local 400 Activists Stand In Solidarity with Verizon Wireless Workers
On Saturday, March 19, Members of UFCW Local 400 were proud to join our brothers and sisters in the Communications Workers of America (CWA), Local 2204, at an informational picket at a Verizon Wireless store in Salem, Va. 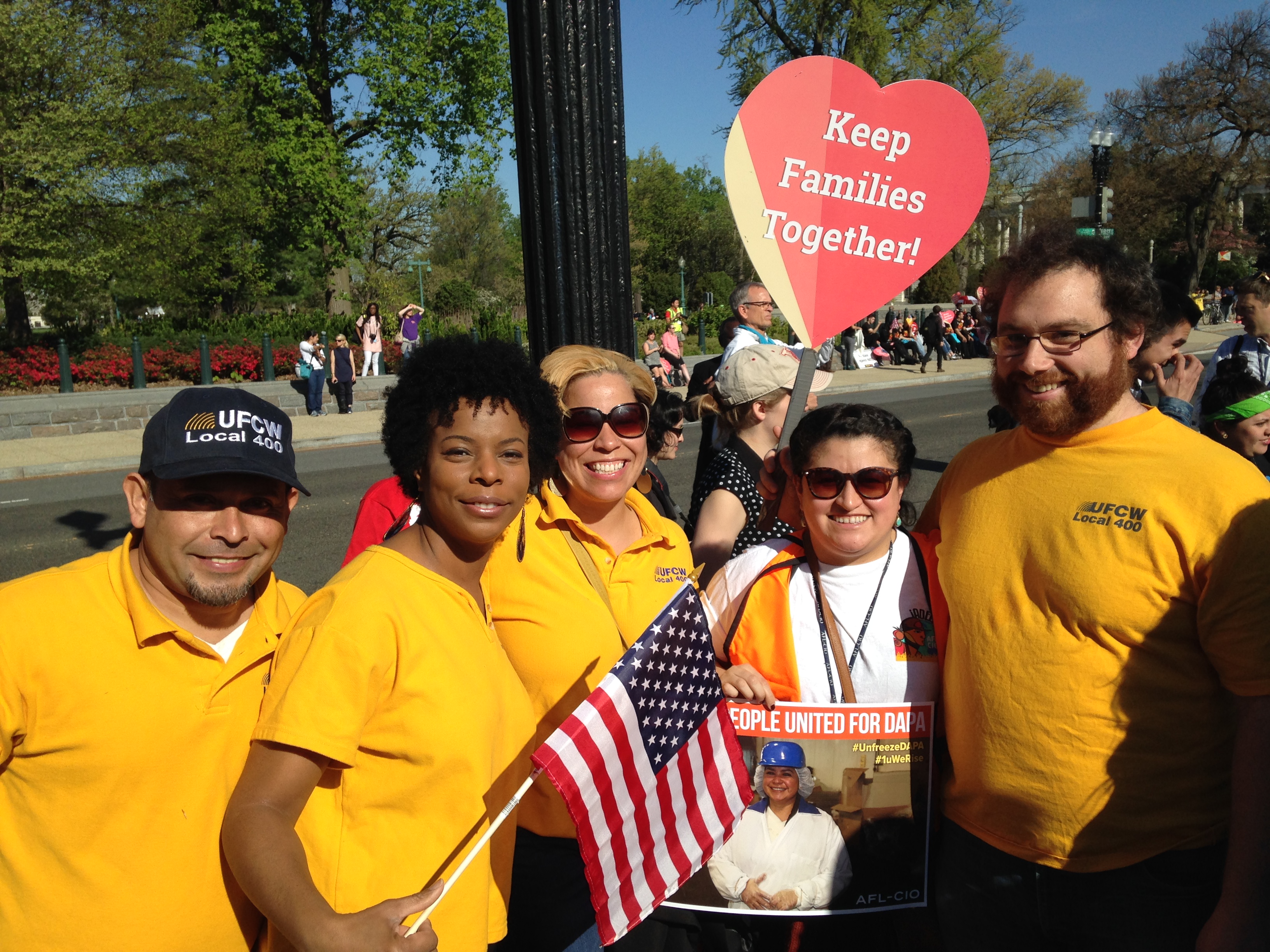 The rally at the Supreme Court sent a strong message that the UFCW will continue pushing forward with our efforts to build worker power for immigrants and ensure that when the legal ruling on DAPA and expanded DACA are rendered, UFCW members are first in line when the application process begins.

Hundreds of Employees, Customers, Allies Deliver Thousands of Petitions to Giant Demanding Save My Store
Hundreds of Local 400 members, Giant customers, brothers and sisters from other unions, community allies, elected officials and faith leaders today marched from Local 400’s office to Giant headquarters to deliver thousands of petitions telling the company, “Save My Store!” 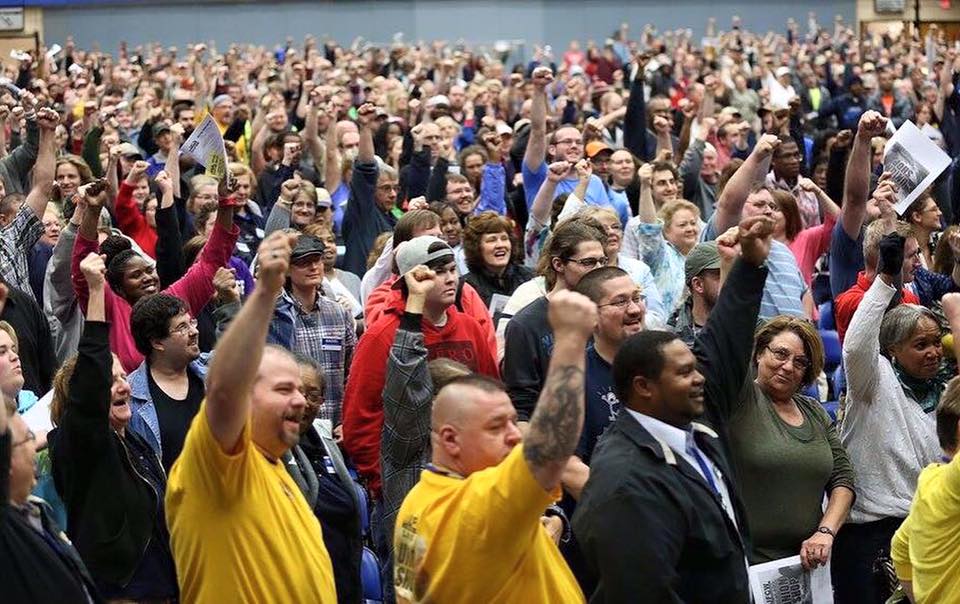 On Wednesday, May 18, at our mass meeting in Salem, members voted unanimously to reject Kroger’s “last best offer” and authorize a strike at 41 stores in the region.

When Kroger tried to force us to accept a bad deal, it wasn’t until we all stood together and voted unanimously to authorize a strike that we forced Kroger to do better. By standing united, we won several improvements over our last contract, including higher starting pay and additional personal holidays.

We Saved Our Stores!
By standing together as a union family, we were successfully able to save hundreds of jobs and prevent all Giant eight stores in the region from being sold as part of a corporate merger. 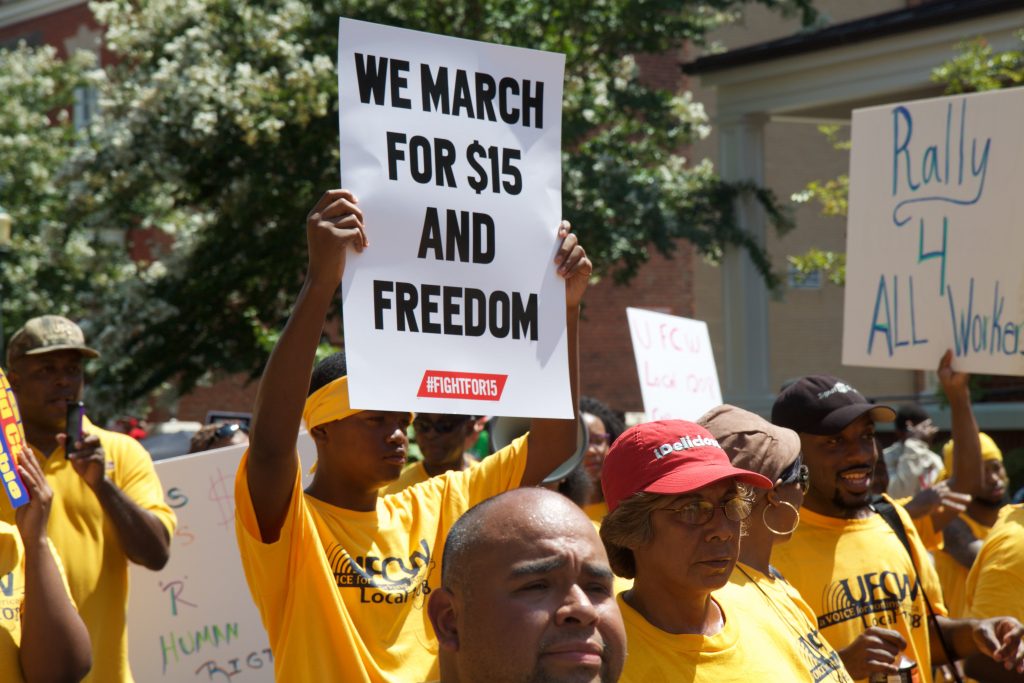 Thousands Gather in Richmond for Historic Fight for $15 March
Thousands and thousands of us marched through the streets of Richmond to demand economic justice for the 64 million Americans working for less than $15 an hour. The march brought together people from across the country working too much for too little – from Kroger associates to fast food workers to childcare providers and even college professors.

Workers at Nation’s Only Lipton Tea Factory Vote to Unionize
The Lipton plant has operated in Suffolk, Virginia for more than 60 years and produces nearly all of the Lipton tea sold in North America. Lipton workers announced the victory at a press conference outside the plant on Monday, August 29. 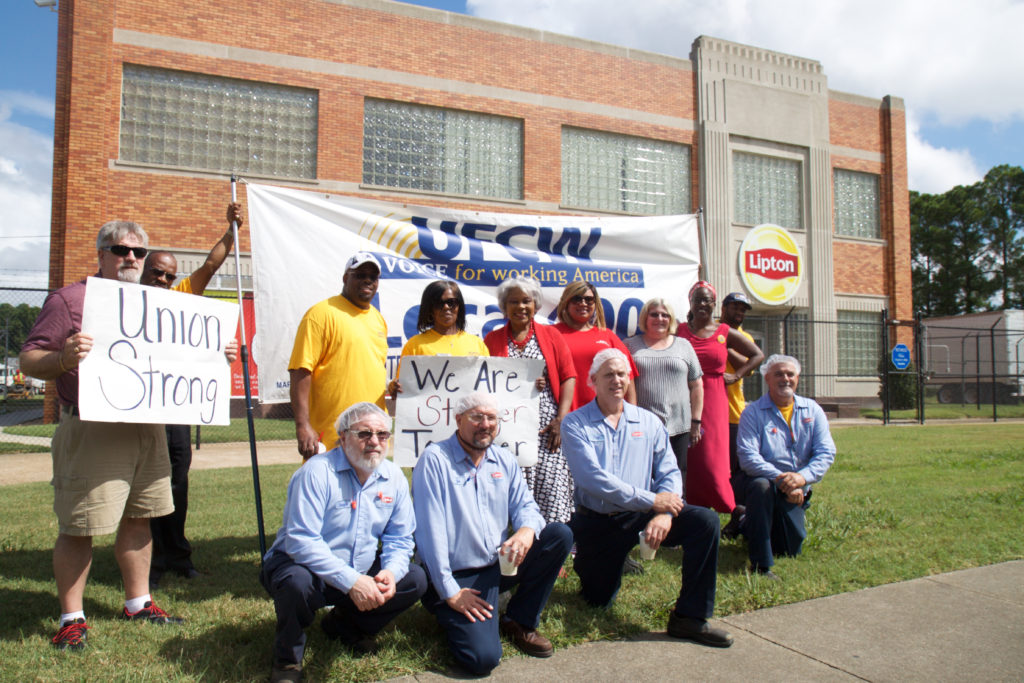 In-Store Actions at Giant and Safeway: Reporting Scheduling Violations, Talking to Customers and Being a Team
We created some serious buzz among the members and customers as we continued to bargain for a fair deal at Giant and Safeway. In just two days, more than 4,000 customers delivered cards to store managers expressing support for us as we negotiate our new contract. 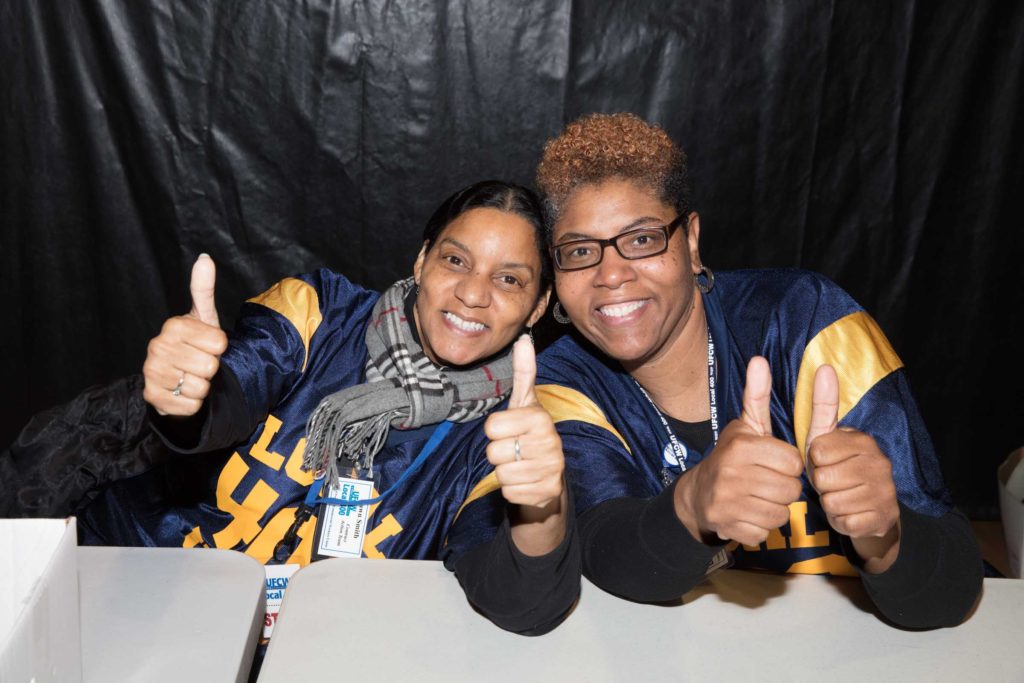 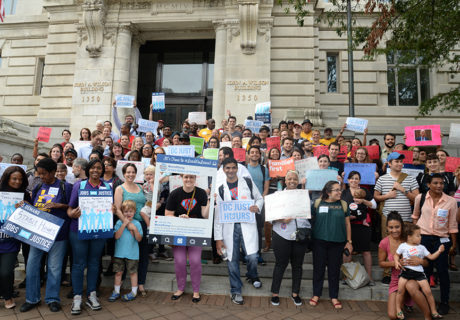