Hundreds of Employees, Customers, Allies Deliver Thousands of Petitions to Giant Demanding Save My Store 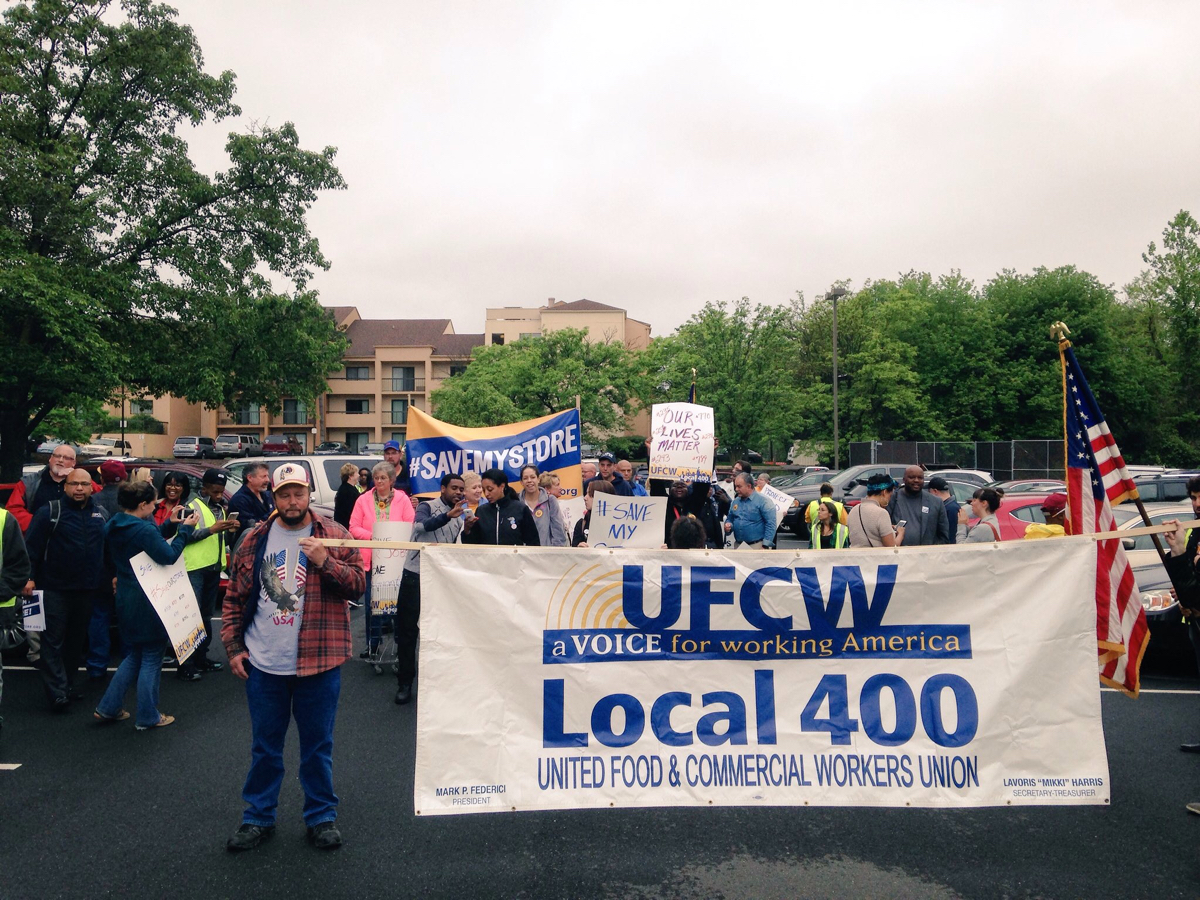 Company Responds with Words, Not Action

Hundreds of Local 400 members, Giant customers, brothers and sisters from other unions, community allies, elected officials and faith leaders today marched from Local 400’s office to Giant headquarters to deliver thousands of petitions telling the company, “Save My Store!”

The boisterous rally was prompted by Giant’s announcement in March that it would sell eight stores in the region due to a corporate merger between Ahold and Delhaize, the European-based parent companies of Giant and Food Lion. Since that time, workers and customers at the stores slated to be sold have heard nothing about their fate and have received no assurances that their jobs and the protections of their union contract will be observed by store buyers.

“This is an example of corporate America run amuck,” said Local 400 President Mark P. Federici. “Why in the world is it right for the people who work and make profits for this company to be the last to know about their fate? That’s wrong.

“We’ve had enough of our work, our sweat, our blood making it possible for these big deals to happen, but then we’re immediately forgotten about,” he charged. “We’re here to say, ‘go close somebody else!’”

“I was devastated when I heard about our store being sold,” said Robyn Wheeler, who has worked at the Fredericksburg, Va., Giant for 36 years, and is both the daughter and mother of longtime Giant employees. “We’re there every day doing our jobs. They’ve left us in the dark big time—no lights at all. We’re here to get answers and especially a good outcome.”

“We’re talking about our livelihoods,” said Jeannie Weaver who works at Giant #338 in Accokeek, Md. “Giant management aren’t the ones who are affected. We’re the ones who have to stand firm and tell them, ‘No way! Don’t shut our doors. Don’t keep us in the dark.’”

“When I think of Giant, I think of community,” said Eric Masten, secretary treasurer of UFCW Local 27. “Our store in Salisbury has been there since 1959 and it’s an integral part of the community. For a long time, it was the only Giant on the Delmarva Peninsula. It makes me sick to see what has happened to corporate finance.

“We’ve submitted 1,200 ‘Save My Store’ petitions from Salisbury alone,” Masten said. “Our customers don’t want to lose their Giant. Our customers identify with our workers. It would be a sad day if the company shuts down a store with good wages and benefits while leaving open stores where people make low wages and benefits.”

Joe Wood, a Local 27 member who has worked at Giant #351 in Salisbury for 30 years said, “This goes beyond everybody in this room. I’m a receiver and this affects every vendor. If Giant closes us down, it closes a million dollar store. It affects Salisbury. It affects the taxes our city collects. For each of us, this affects another 15 to 20 people.

“If our store gets sold to a non-union business, we go from middle class wages to Section 8 housing wages,” Wood said. “We’ll be spending less in our community. When you stop cutting meat in the store, what happens? Management thinks they save money. But what about the shoppers they lose?”

Deborah Snyder of Stafford, Va., attended the march and rally, noting, “I’ve shopped at my Giant for close to 40 years. When I heard this was happening, I knew I had to support the workers.”

After rallying in front of Giant headquarters, a group of marchers delivered four shopping carts full of signed petitions to company representatives. Afterwards, they told the crowd that while Giant offered to meet with individual workers and claimed its “priority” was to sell the stores to unionized companies that pay good wages and benefits, managers made no commitments.

“I was not satisfied with Giant’s answer,” Federici said. “No disrespect to the offer, but we want facts. We want them to put this in writing. We want them to respond to the official request by Local 400 and Local 27, and they still have not done so. Rhetoric does not put bread and butter on the table.”

Throughout the rally, a host of other union members, elected officials, community activists and religious leaders lent their voices of support. Virginia AFL-CIO President Doris Crouse-Mays, said, “We stand with you in this fight. How much is enough? You make $2 billion and that’s not enough? Enough’s enough. Don’t destroy lives and communities.” Ritchie Brooks, president of Teamsters Local 730, noted, “Local 400 has had our backs whenever we’ve needed you. And we’ve got your backs.”

Rev. Graylan Hagler, senior pastor of Plymouth United Church of Christ, told the marchers, “You do not stand alone. On this issue, we stand as one people. Folks will take away from you anything you’re not willing to fight for. When we stand together, when we fight together, when we stand arm in arm, we can take back the forces of greed every single day.”

Virginia State Sen. Scott Surovell (36th district), noting that Ahold and Delhaize are European-based companies, observed, “There, workers get taken care of. They shouldn’t come here and act like Walmart.”

Maryland State Sen. C. Anthony Muse (26th district) said, “No way you’re going to take these jobs way. No way we say Maryland is business friendly but not worker friendly. We’re telling Giant, this is not just about these stores [slated to be sold]. Your stores are throughout our state and we have a long memory.”

Monica Sarmiento, executive director of the Virginia Coalition for Immigrant Rights, said, “Shame on Giant for keeping UFCW in the dark. Their wealth was built off of your hard work. We will not be silent while you are robbed. You are not alone.”

Rally attendees pledged to keep fighting—and then some—to save their stores. “We’re not stopping now,” Federici emphasized. “This is not an end. We are not going to walk away.”