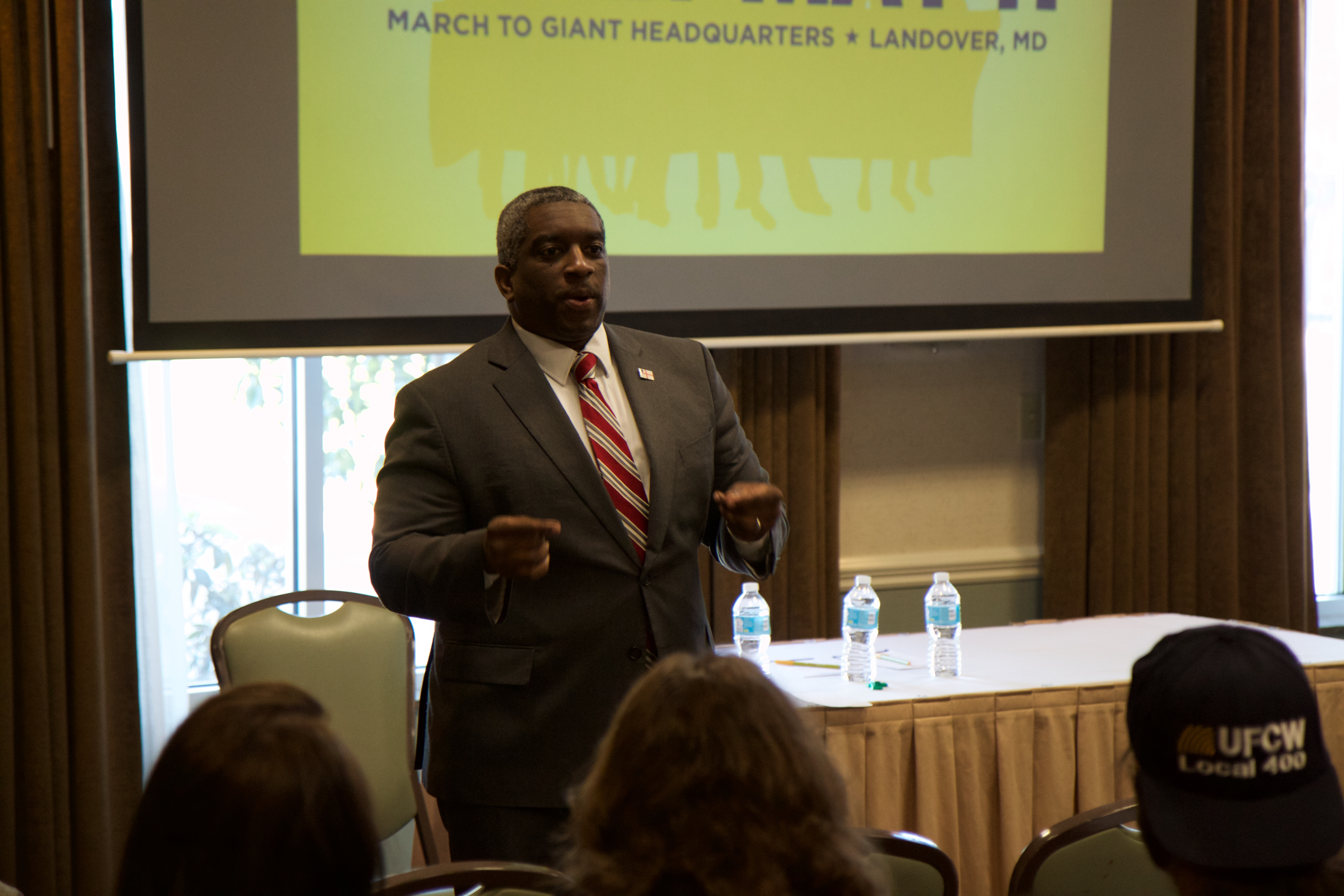 In March, employees at eight Giant Food grocery stores in the region were told their stores could be sold thanks to a corporate merger between Ahold and Delhaize, the European-based parent companies of Giant Food and Food Lion.

They weren’t told when this would happen or even what would happen to their jobs. Instead, they were told to keep it to themselves and get back to work. As one cashier recalled, “management told me, ‘don’t tell the customers, you might scare them away!’”

But with hundreds of their jobs at stake, they weren’t going to keep this quiet. Together with their union, UFCW Local 400, the employees launched the #SaveMyStore campaign to bring together Giant employees, union members, and the communities they serve to save these stores.

From the start, the campaign drew support from elected officials and political leaders in the area, and that momentum has only continued to grow.

Fredericksburg Mayor Mary Katherine Greenlaw, who recently won re-election to a second term, was among the earliest to lend her support to the Giant employees and spoke at the campaign’s kickoff event in March. She was joined by former city councilmember, Rev. Hashmel Turner.

“They, and the people they employ, are great contributors to our collective quality of life in Stafford County,” Baroody explained.

Scott Surovell, who represents District 36 in the Virginia state senate, has agreed to speak in support of the campaign at the upcoming #SaveMyStore rally on May 11, while at the federal level, Senator Tim Kaine of Virginia and and Congressman Steny Hoyer of Maryland’s 5th congressional district also expressed their support for the workers’ efforts.

Over in Maryland, state and county leaders have been equally enthusiastic in their support.

At a campaign event in Accokeek, Maryland, Prince George’s County councilmember Mel Franklin shared wisdom from his years of experience at the Federal Trade Commission, the agency which must approve the merger before it can move forward.

“We have to get organized, get to the FTC and weigh in with them so they know our concerns,” Franklin said. “At the end of the day, we need to win.”

Delegate Edith Patterson from Maryland’s 28th district was similarly supportive. “You are more than workers, you are family,” she told attendees at a town hall in La Plata, Maryland, while holding up her Giant bonus card.

“I will be with you,” Patterson added when asked if she would attend the rally on May 11. Maryland SenatorAnthony Muse from district 26 has also pledged to attend, while Delegate Kris Valderrama also expressed support for the campaign.

Campaign representatives have also met with Governor Terry McAuliffe’s staff in Virginia, as well as the state’s attorney general, Mark Herring, in an effort to influence the outcome of the FTC process.

But with the company refusing to provide additional details on the store sales as the FTC process continues, union leaders and Giant employees will continue to reach out to every elected official in the region to gather support.

On May 11, the campaign plans to deliver thousands of signatures on a petition to the company directly to Giant Food headquarters in Landover, Maryland.