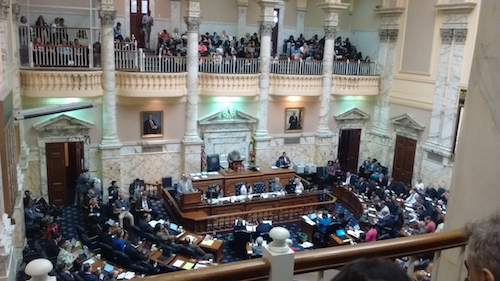 The galleries were full of earned sick days supporters as the
House of Delegates debated the Healthy Working Families Act last week. Photo via Working Matters.

Legislation Passes 84-54 With One Week Remaining in Session

Reposted from our friends at Working Matters, a coalition of more than 150 organizations committed to advancing the Maryland Campaign for Paid Sick Days.

The Maryland House of Delegates voted 84-54 today to approve legislation that would allow Maryland workers to earn up to seven paid sick days per year.

The successful House vote marks the furthest the bill has ever advanced within the Maryland General Assembly. The Healthy Working Families Act (HB 580/SB472) now awaits action in the Senate, where it currently remains in the Senate Finance Committee.

“Today, the House of Delegates underscored that Maryland families can’t wait any longer for earned sick leave,” said lead House sponsor Delegate Luke Clippinger. “With this vote, we are one giant step closer to ensuring that hundreds of thousands of working Marylanders no longer have to make the impossible choice between their health and their job, between the well-being of their families and their economic security.”

Also today, in a letter delivered to Senate President Miller and every member of the Senate, nearly 100 religious leaders from denominations and congregations across the State called upon the Maryland State Senate to act swiftly in passing a strong earned sick days bill. “When the health of workers is compromised by illness, they need time away from work to heal without fear of losing their jobs,” the faith leaders wrote. “People should not need to choose between earning an income to support themselves and their families or taking the time to restore their health or that of their family members.”

The Institute for Women’s Policy Research estimates that more than 700,000 Marylanders — nearly 40 percent of the state’s workforce — are unable to earn paid sick days to use when they or a family member are ill.

An October 2015 poll conducted by the University of Maryland/Washington Post found that 83 percent of voters support allowing workers to earn a limited number of annual paid sick days. This support was broad across key voting blocs, including 91 percent of Democrats and 64 percent of Republicans.

With just over a week remaining in this year’s state legislative session, supporters of earned sick days – including faith leaders, community advocates, public health officials, nonprofit executives, parents with their children, and Maryland workers unable to earn paid sick days – will continue to rally in front of the State House each morning to greet senators as they head into floor sessions, and to urge passage of the Healthy Working Families Act.

To date, five states and 24 cities or counties – including Montgomery County, MD – have enacted earned sick days measures, either through legislation or voter-driven ballot initiatives, and more wins are on the horizon.

With only one week remaining in Maryland’s legislative session, your Senator needs to hear why there’s no reason to wait until 2017 to pass the Healthy Working Families Act.  The bill has been vetted for four years and is ready to go, as is evidenced by action taken in the House. Please click here to ask for your Senator’s help in bringing the bill to a vote.