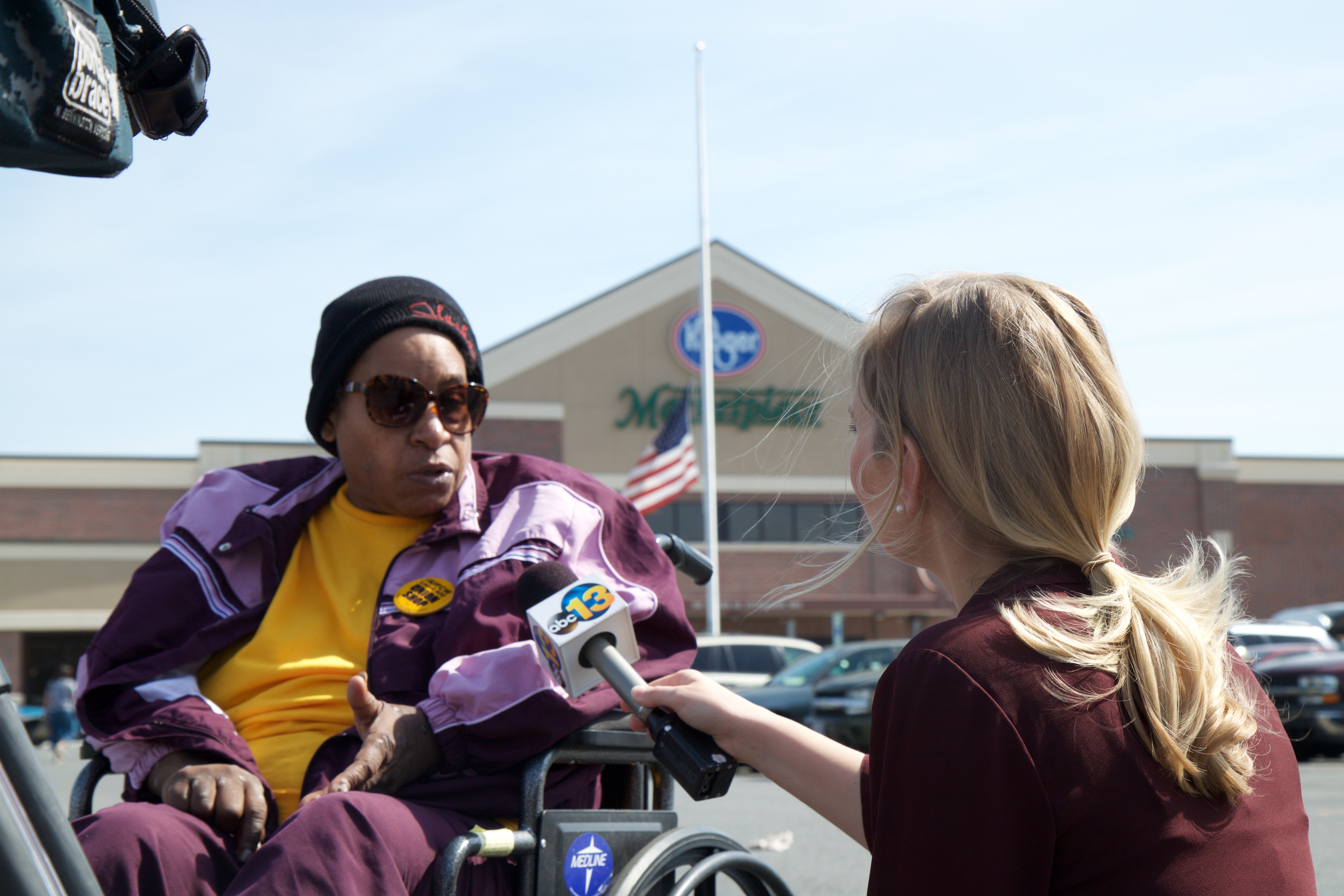 After 18-Year Cashier Suffers a Stroke on Insane Commute, Coworkers Deliver Hundreds of Petition Signatures to Kroger Demanding A Transfer

Felecia was interviewed by every TV news outlet in the area, as well as the main local newspaper.

Yesterday, a petition with more than 330 signatures from employees were delivered to store managers at a Kroger Marketplace in Portsmouth, Virginia.

Felecia Mayes, an 18-year employee with the company who suffered a stroke while commuting to work, lives only minutes away from the store. The petition called on the company to allow her to transfer to the store with all the benefits and protections of her union contract intact.

“I live right around the street from Kroger, ten minutes away,” Felecia explained to News Channel 3. “Now how come I have to go all the way to Virginia Beach, which takes me two hours, to a job that I have worked for for almost 18 years? I mean, it’s just not fair.”

“I have to take three buses and a light rail just to get to work,” explained Felecia. When asked why the company has not granted her request for a transfer, Felecia told ABC 13 News Now “because it’s a non-union store and they don’t want no [sic] non-union members here.”

With TV camera crews from every local news outlet on the scene, Felecia, who now requires a wheelchair, delivered the signatures to the managers at a Kroger Marketplace just minutes from her home. The store manager immediately threatened to call the police.

“They’re discriminating against her in effect because she’s a union member,” explained Delegate Heretick.

Addressing the crowd, Senator Lucas said “this is the kind of effort we all like to stand in agreement with.”

Last year, after Kroger closed her store in Portsmouth, she applied for a transfer to a Kroger Marketplace store only minutes from her home. The company denied her request and gave her two choices instead – commute to a store two hours away from home or lose her job.

Last week, while taking the two-hour trip to work, Felecia suffered a stroke on the bus. Her doctor attributes to the stress and physical difficulty of her new commute. Meanwhile, there is a Kroger Marketplace store within eyesight of her home.

In a statement issued later in the day, Kroger claimed “when we closed the store where she was working, we provided her the opportunity to work at one of our other stores where full-time cashier positions were available.”

However, what the statement did not mention is that the company refused to allow Felecia to maintain the protections and benefits of her union contract. She would have been forced to start at an entry-level position, despite having worked for the company for 18 years. “I wasn’t going to give up my benefits and everything, so I made the commute to Virginia Beach,” Felecia said.

The petition called on the company to formally respond within five days. Local 400 will continue to call on the company to respect this dedicated employee, and the more than 300 coworkers that stood with her, until she is granted a transfer.

“We`d just like Felecia, when she’s ready, to be able to get back to work and really the only way she’s going to be able to do that is if she can work at a store close to home,” explained Mike Wilson, Strategic Campaigns Director for Local 400.

Portsmouth woman says 4-hour commute to Kroger caused stroke and paralysis, according to doctor
By Jordan Pascale
The Virginian-Pilot

Union workers are protesting outside Kroger in Portsmouth. Find out why tonight on @WTKR3. https://t.co/hiXIVRZBDC pic.twitter.com/m8sHqXq6sW

Felecia Mayes is asking to be transferred to a Kroger closer to her home following a stroke. https://t.co/hiXIVShcva pic.twitter.com/fjmEGgZjve

“I’m just a loyal employee and this is how I’m treated,” – Felecia Hayes describes. https://t.co/hiXIVRZBDC pic.twitter.com/TyNdVPyqNC

Tonight on @WTKR3, we’ll hear @kroger side of an employee’s complaint about a work transfer. https://t.co/hiXIVRZBDC pic.twitter.com/H2huA6uY4K

A Kroger employee says she commutes 2 hrs to work because she can’t transfer to a store near home @WAVY_News pic.twitter.com/AkyBYCockx