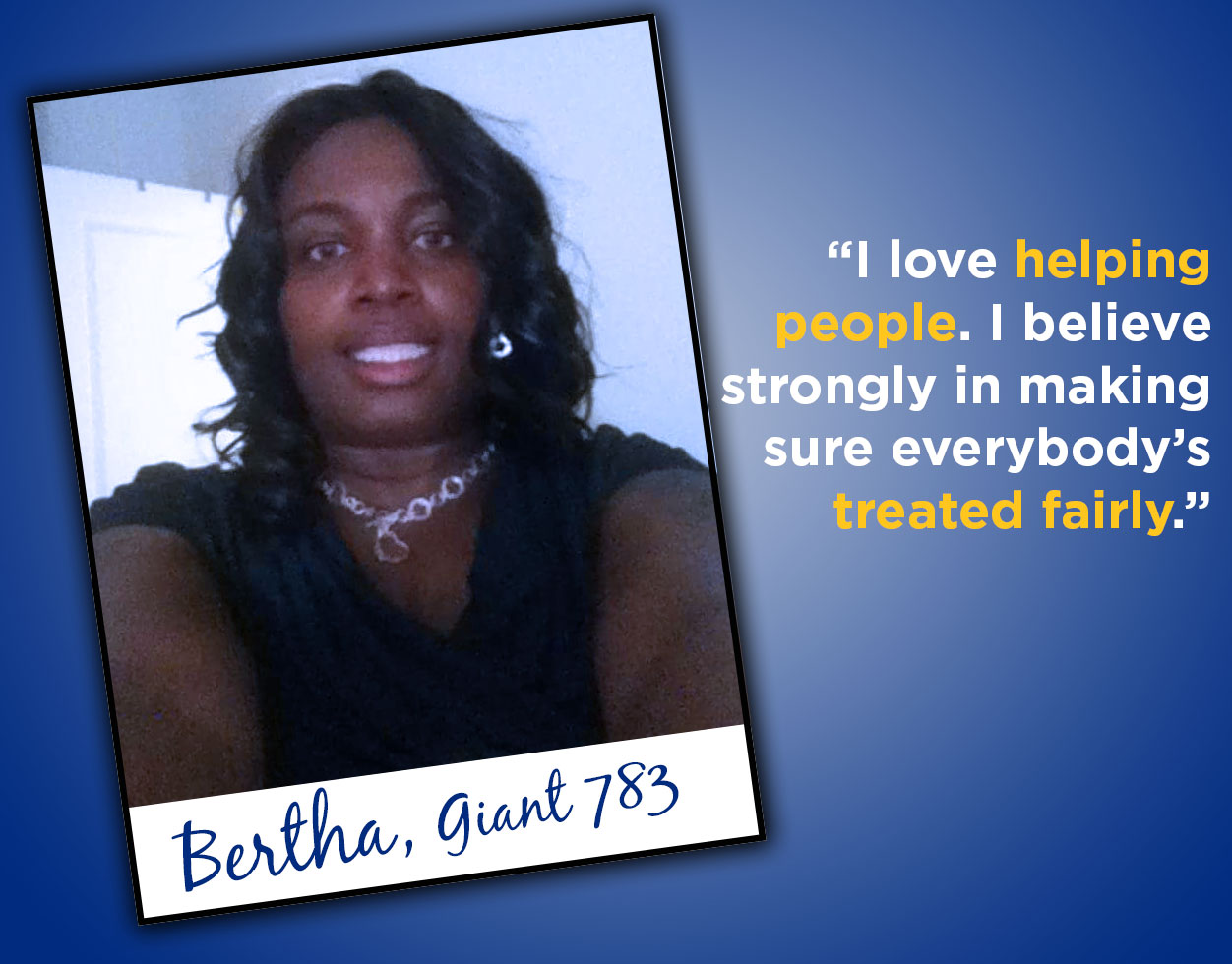 Long before she became a shop steward, Bertha McKiver was helping her Local 400 sisters and brothers. Currently the bakery manager at Giant #783 in Burke, Va., Bertha spent many of her 24 years at the company helping to solve her co-workers’ problems. Whether they had issues with their health care coverage or a conflict with a supervisor, Bertha had the answers to their questions and good advice to give.

So it was only natural—even inevitable—that she was asked to become a steward in 2007, a job she has been performing brilliantly ever since. In fact, she is so effective that Local 400 members from other stores often come to her with questions and seeking guidance.

“I love helping people,” Bertha said. “I believe strongly in making sure everybody’s treated fairly, and it’s very gratifying every time I can help achieve this goal. It gives me joy to see the smile on someone’s face when they get justice.”

Bertha also makes it a priority to sign up members at her store and others. “I tell new hires that their opinion counts every bit as much as anyone else’s,” she said. “But if they want their opinion to count, they need to become members and they need to be involved. They also get discounts, deals on cell phones, help buying a new car and other useful services.”

During the 2013 round of bargaining, Bertha participated in contract campaign actions, handing out flyers and talking to customers in front of her store and others. She hopes to be even more involved in the next round of bargaining, which will take place this fall. “I’m going to be out there telling people what’s going on and I’m ready to do whatever it takes to protect our health and pension benefits, increase wages, and reduce the high turnover among younger workers.”

Bertha is similarly active in other Local 400 activities. She has participated in actions at area Walmart stores, and rallies on issues ranging from food stamps to immigration.

A proud mother and grandmother who lives in Woodbridge, Va., Bertha has a special appreciation for what it’s like to be represented by a union. “I’ve worked at a franchise where there was no union,” she said. “The things management did could never have happened at Giant and there was no way for me to do anything about it. It was like night and day

“Being a Local 400 member has had such a big impact on me,” Bertha said. “It enables me to help people and that’s what I love doing.”