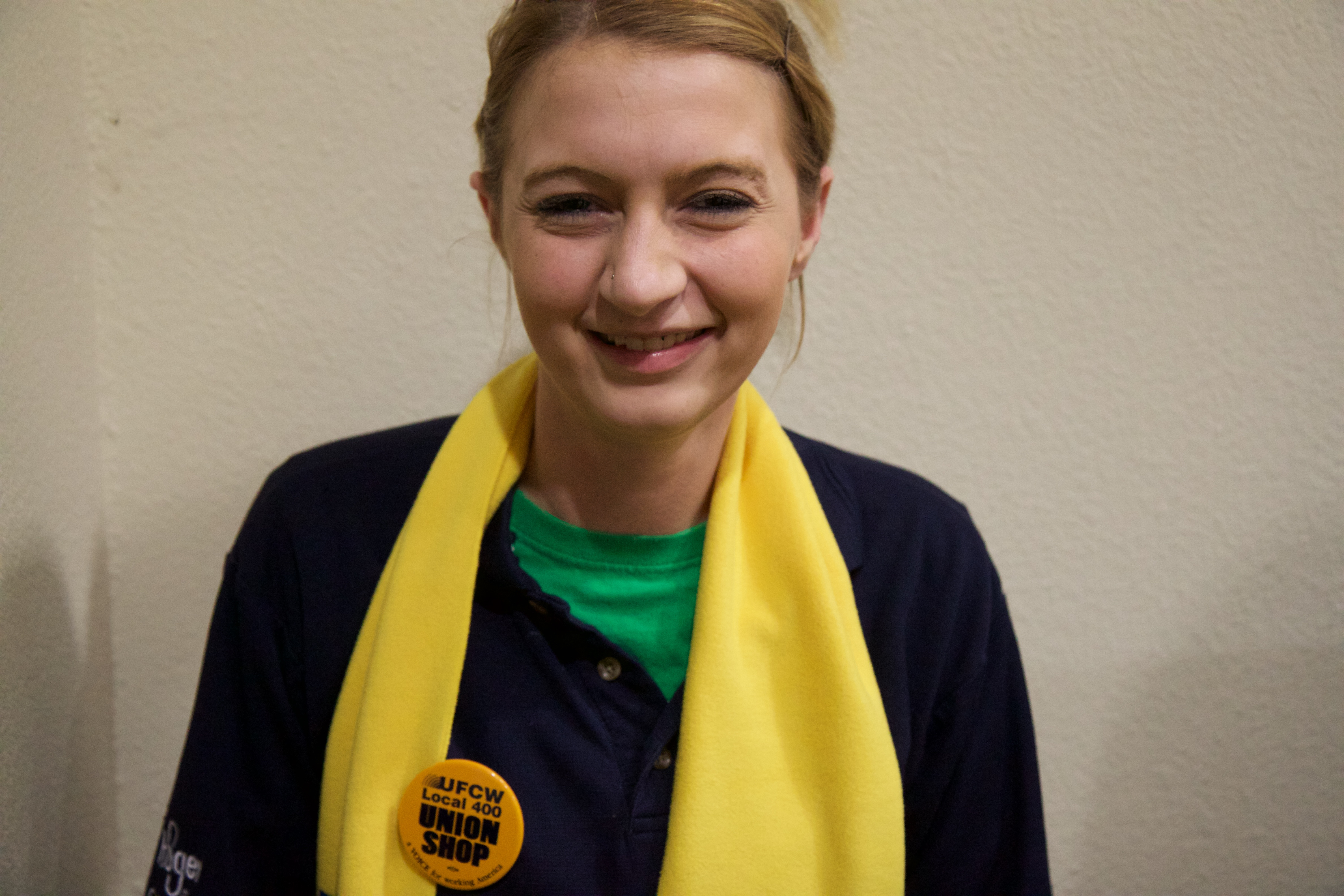 Sarah Strong is an assistant front end manager at Kroger in Bristol, VA.

Sarah Strong has a powerful sense of justice. An assistant front end manager at Kroger #335 in Bristol, Va., there is little that makes her angrier than to see how courtesy clerks at the store are mistreated.

In an increasing practice, Kroger has hired “courtesy clerks” to push carts, bag groceries, and assist customers in the front of the store. These employees are paid Virginia’s minimum wage, a paltry $7.25 an hour, and are ostensibly prohibited from promotion opportunities or pay raises. According to several members, few courtesy clerks last more than a matter of months.

“They do the hardest job but they’re paid the least,” Sarah said. “They’re out there in the bad weather collecting the carts and they clean the bathrooms, too. They’re just as important as me, but they’re certainly not treated that way. It’s just not fair.

“What’s even worse is they’re not given an opportunity to make more money or move up no matter long they’ve worked there,” she said. “We’re not even allowed to train courtesy clerks to become cashiers. They should be able to make a career of it, get health insurance and afford to pay their bills. Yes, some are kids in school who aren’t expecting to stay long, but improving the position—or eliminating it entirely—would reduce the high turnover rate.”

Sarah has turned her outrage into activism. She was hired at her store seven years ago as—yes—a courtesy clerk, but within a week she was moved up. Since that time, she has worked in virtually every department of the store. And she has made a point of speaking up for her co-workers. That led to her becoming a shop steward, a position she had to give up three years ago due to family obligations. But she remains deeply involved in the affairs of her store and her union.

Sarah has been attending meetings to prepare for the upcoming Kroger-Roanoke bargaining (see page 14) and plans to play an active role in process. “I’m going to encourage our members to vote when the time comes for ratification,” she said. “It’s very important that members listen to what’s been offered, to understand what’s happening, and to know what we’re fighting for. We’ve got to get our membership up and our voices heard. If our members don’t care, things won’t get better. We can’t expect change if nothing changes.

“Above all, we can’t bicker among ourselves,” she said. “It’s not all about ‘you.’ It’s all about ‘us.’ Being in a united front means more than you would think.”

Sarah, who lives in Bristol with her 10-year-old son, Landon, is a people person above all else. Her favorite part of her job is her customers. “Sometimes you see their whole families, you know them for years, and they’re the funniest, sweetest people you can meet,” she said. “All you have to do is say, ‘Hi, did you find everything OK?’ and you can make some very good friendships.”

And people are what Local 400 means to her, too. “We’ve got support,” she said. “When I went after the position I have now, I had to fight tooth and nail. My shop stewards went above and beyond the call to make sure I was treated fairly. Without their support, I never would have gotten this position. I’ve also become very good friends with several members. In a big company like Kroger, you can feel alone. But being a Local 400 member means I’m not alone. And that means the world.”